NASA makes history with the first demonstration of controlled flight on another planet. 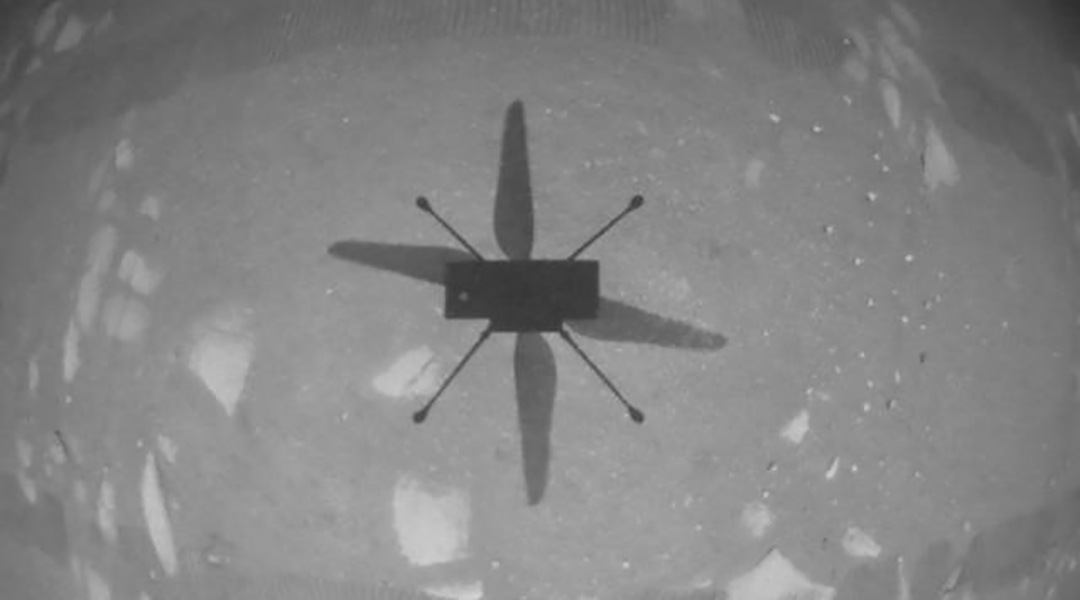 NASA’s Ingenuity Mars Helicopter captured this shot as it hovered over the Martian surface. Image: NASA

What started as a dream is now becoming reality for the Mars Ingenuity Helicopter team. On Monday, the miniature helicopter made history as the first aircraft to make a powered, controlled flight on another planet. Ingenuity contains no science instruments inside its fuselage, but is intended to demonstrate whether future exploration of the Red Planet could include an aerial perspective.

“Sometimes you have to do something to show you can do it,” said the NASA team. “When the Wright brother flew for the first time, they used an experimental aircraft, and in the same way, we designed an experimental helicopter to demonstrate we could fly on Mars.”

After years of development on Earth, the Ingenuity team at the agency’s Jet Propulsion Laboratory in Southern California confirmed the flight succeeded after receiving data from the helicopter via NASA’s Perseverance Mars rover at 6:46 a.m. EDT (3:46 a.m. PDT). During the test, Ingenuity climbed to an altitude of 10 feet (3 meters) and maintained a stable hover for 30 seconds. It then descended, touching back down on the surface of Mars after logging a total of 39.1 seconds of flight.

“We don’t know exactly where Ingenuity will lead us, but today’s results indicate the sky — at least on Mars — may not be the limit,” said acting NASA Administrator Steve Jurczyk in a statement.

Ingenuity was landed along with the Mars Perseverance rover in February of this year in a region called Jezero Crater. The helicopter was attached to the rover’s belly during it’s harrowing descent to the surface of the Red Planet after which it was driven to an “airstrip” NASA has dubbed the Wright Brothers Field roughly 20m away from the original landing site. In true millennial fashion, the rover then took a selfie of the two of them after lowering Ingenuity to the ground.

This flight has been years in the making, with NASA scientists working to develop a solar-powered helicopter capable of flying under the Martian atmosphere, which is less than 1% of the pressure at the surface compared to Earth. This means that there are fewer molecules in the air, making it difficult generate enough lift for flight. For this, scientists had to simulate a Martian atmosphere and perform countless tests.

“The first and foremost challenge was to make a vehicle that is light enough to be lifted and the second is to generate lift using rotors that spin very fast, between 2000-3000 revolutions per minute; this take a lot of energy,” said MiMi Aung, project manager of the Ingenuity Mars Helicopter at JPL in a pre-flight briefing.

This test will be one of many, with a further four flights planned for the coming days.

“You can traverse places without being hindered by the terrain in the same way as a land-based vehicle is,” explained Havard Grip, Ingenuity’s chief pilot in an interview with the BBC. “It could do scouting missions for future rovers, perhaps, or even for astronauts, and then we’re also thinking about it in terms of the potential for carrying its own science instruments to places that are very hard to access.”

NASA has also already approved another extraterrestrial helicopter mission to Saturn’s moon, Titan, as part of its Dragonfly mission, which should arrive at Titan in the mid-2030s. Here the atmosphere is thicker than Earth’s, meaning a different technological approach must be taken, but Ingenuity will still be paving the way for this and future projects.

“We have been thinking for so long about having our Wright brothers moment on Mars, and here it is,” said Aung in another statement. “We will take a moment to celebrate our success and then take a cue from Orville and Wilbur regarding what to do next. History shows they got back to work — to learn as much as they could about their new aircraft — and so will we.”

How can we leverage heritage in a changing global climate?
Growing interest in Moon resources could cause tension
Absolute zero: A counter-intuitive energy transition
Improving one of medicine’s greatest inventions: Vaccines