“Seven minutes of terror”: The Perseverance rover’s descent to Mars

Before the Perseverance rover can begin its exploration of Mars, it must first stick the landing. 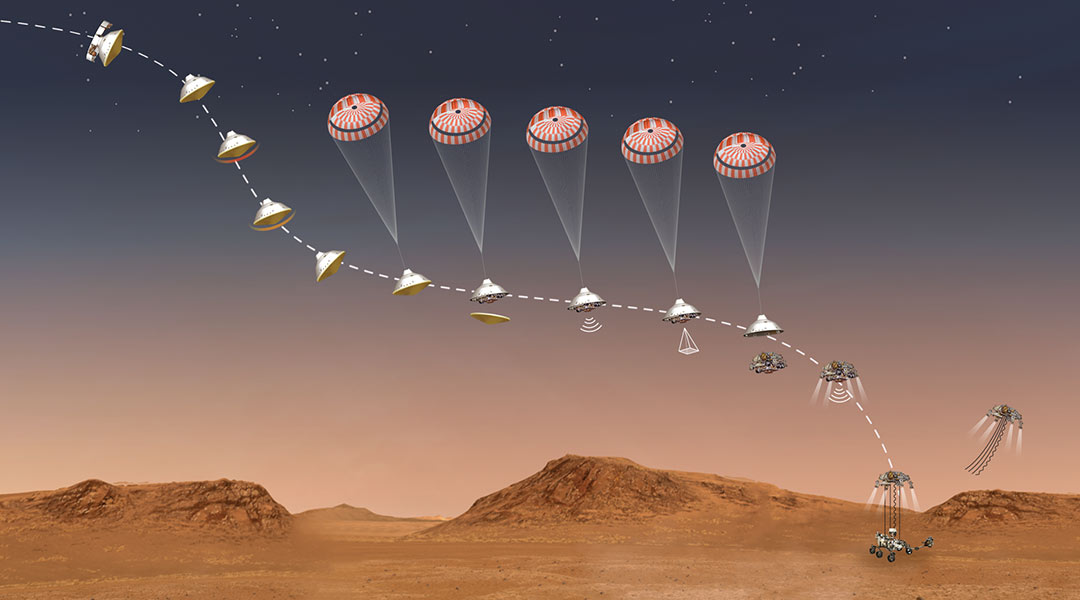 When the Perseverance rover reaches the top of the Martian atmosphere tomorrow, it will be traveling at around 20 000 kilometers per hour. Seven minutes later it will have decelerated to just two kilometers per hour, a jetpack delicately aiming to drop it on the surface of the planet.

That is if all goes according to plan. In the history of Martian exploration, only 40% of probes that have been aimed at the surface have successfully landed. The most cursory look at the schedule for the planned descent makes clear why the failure rate has been so high.

As the entry vehicle approaches Mars, it will reorient itself so that the heat shield is facing the planet. This shield will protect the rover from temperatures up to 1300 degrees Celsius (around about the same temperature of the inside of a volcano).

This molten-rock-level heat is a side effect of the rover smashing into the air molecules in the Martian atmosphere. Another useful side effect of these collisions is that they slow the vehicle down via friction.

It’s not that simple though. Just like on Earth, the Martian atmosphere is far from uniform; there are pockets of air with higher density and pockets with lower density. These unpredictable fluctuations will bounce the lander around, knocking it from its planned trajectory.

To compensate for this, the lander is equipped with thrusters that it will fire automatically to keep it heading straight for its planned landing site on the Jezero crater. This process needs to happen automatically because it takes 11 minutes for radio transmissions from Mars to reach Earth. Any manual alterations to the trajectory from mission control would arrive around 20 minutes too late.

If the heat shield does its job, around four minutes after entering the atmosphere, the lander will have slowed to 1600 kilometers per hour. At this stage a massive 21.5 meter diameter parachute will deploy.

At this point the entire landing apparatus will be 11 kilometers from the surface. As it continues to sink through the atmosphere, the heat shield will detach, and cameras on the rover will assess the safety of the terrain which it is heading toward.

Around 2 kilometers from the surface, the lander will be traveling at 320 kilometers per hour, the parachute will detach, leaving only two parts of the original lander present, the rover and a jetpack.

The jetpack, with its rockets directed at the ground, will continue to slow the descent, until 20 meters above the surface when the jetpack will lower the Perseverance rover on cables to the surface of Mars.

All seven minutes can be watched, as live as the speed of light will allow, here.

It’s going to be a hell of a ride.

NASA has some excellent resources available for understanding and following this mission, including the “Entry, Descent and Landing” post that was the primary source for this article.

The Arctic has begun to enter a new climate state
A radical view of organelle evolution
ESO instrument finds closest black hole to Earth
What comes after the lithium-ion battery?