A biomaterial system for immune modulation through expansion of antigen-specific regulatory T cells. 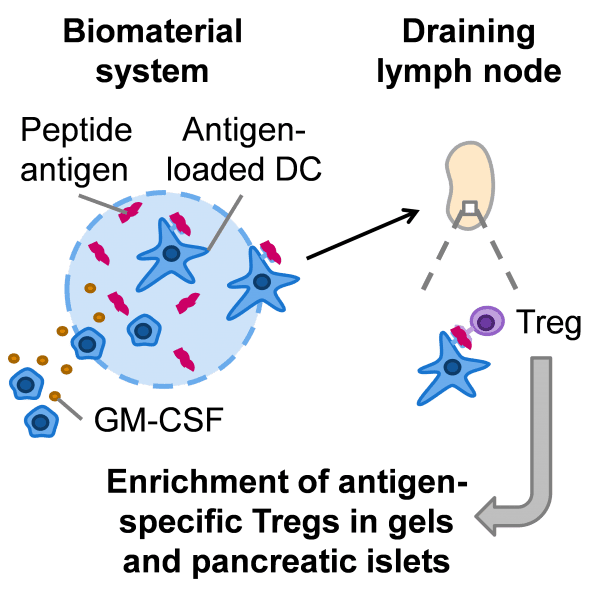 Immunotherapy involves modulating the immune system in order to treat diseases, and biomaterials can be harnessed to develop novel, potent immunotherapies that can precisely manipulate immune cells directly in the body.  The development of effective immunotherapies that induce immune tolerance would be transformative for the treatment of autoimmune diseases, which occur when the immune system becomes dysregulated and attacks specific self tissues as though they were foreign pathogens.  One potential strategy for treating autoimmune diseases is to enhance the action of regulatory T cells (Tregs), which are specialized T cells that are critical for controlling inflammatory responses and maintaining self-tolerance.  Importantly, Tregs have the ability to respond to specific antigens, which are parts of proteins that get recognized by immune cells, enabling them to exert their suppressive functions without leading to systemic immunosuppression. 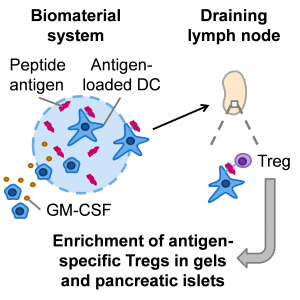 In their recent study published in Advanced Healthcare Materials, Mooney Lab at Harvard University use an injectable biomaterial to expand antigen-specific Tregs in NOD mice, which serve as a model for human type 1 diabetes since they develop diabetes following autoimmune destruction of the insulin-producing beta cells in the pancreatic islets.  A specific antigen that is associated with diabetes in NOD mice was incorporated into injectable, non-inflammatory hydrogels.  These gels were previously shown to recruit dendritic cells (DCs), which interact with T cells and direct their downstream responses, in a non-inflammatory environment.

Following injection of these gels under the skin, DCs were able to take up and present the antigen to T cells, and the T cells that specifically recognized that antigen expanded in numbers.  Over time, these antigen-specific T cells accumulated in the gels, and the majority of the T cells found in the gels were Tregs.  In addition, these antigen-specific Tregs were found at a higher frequency in the target tissue of interest, the pancreatic islets.  Administration of three gel doses did not accelerate disease in NOD mice, indicating that the antigen-specific T cells did not convert into pathogenic T cells and contribute to disease progression.

In the future, this material system could be improved by optimizing the timing of gel administration and the dose and type of antigen delivered, as well as by incorporating tolerogenic factors to obtain a more robust or potent tolerogenic response.  This work provides a basis for further development of biomaterial-based, tolerogenic immunotherapies that could treat autoimmune diseases or transplant rejection by expanding and deploying antigen-specific Tregs directly in the body.