Researchers show that solid polymer electrolytes can be used as the gating insulator for printed electronics, contrary to accepted thinking. 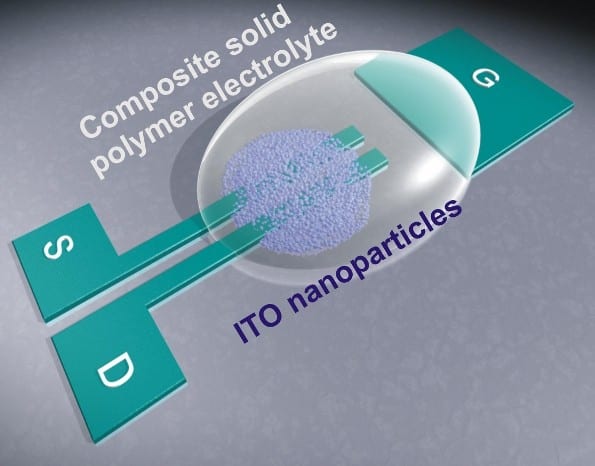 The very first transistor utilized an electrolyte as the gate insulator; however, the idea was later abandoned due to the limited speed of electrochemical devices. Now, half a century later, electrochemical gating is finding its place in a new field of applications – printed electronics.

Scientists at KIT (Karlsruhe Institute of Technology) have shown that high-mobility field-effect transistors (FETs) can be fabricated from printed inorganic oxide nanoparticle-based FETs when combined with (printable) composite solid polymer electrolytes (CSPE) as the gate insulator. It is shown that the total electrolyte resistance between the channel and the gate electrodes is one of the critical factors determining the switching speed in electrochemically-gated devices. In this context, KIT scientist Dr. S. Dasgupta says that the key to attain very fast switching will be the successful printing of ultra thin layers of such composite solid polymer electrolytes.

The study dispels a long lasting misconception associated with electrochemical gating (EG); namely, that the electric charge double layer of an electrolyte, being only a few nanometers in width, results in the switching speed of EG-FETs being independent of the electrolyte/insulator thickness. As a consequence, switching frequencies in excess of MHz (sufficient for printed electronics) are feasible for a highly conducting CSPE at thickness values of a few hundred nanometers for the electrolytic insulator.