Inspired by the mammalian eye, University of Wisconsin-Madison electrical engineers have created the fastest, most responsive, flexible silicon phototransistor ever made.

Inspired by the mammalian eye, University of Wisconsin-Madison electrical engineers have created the fastest, most responsive, flexible silicon phototransistor ever made.

This innovative phototransistor could improve the performance of myriad products—ranging from digital cameras, night-vision goggles and smoke detectors to surveillance systems and satellites—that rely on optoelectronic devices. Integrated into a digital camera lens, for example, it could reduce bulkiness and boost both the acquisition speed and quality of video or still photos.

Developed by Jack Ma, the Lynn H. Matthias Professor and Vilas Distinguished Achievement Professor of electrical and computer engineering at UW-Madison, and  Jung-hun Seo, research scientist, the high-performance flexible phototransistor shown in the image below (a) far and away exceeds all previous flexible phototransistor parameters, including sensitivity and response time.

The researchers have published details of their advance in the journal Advanced Optical Materials. 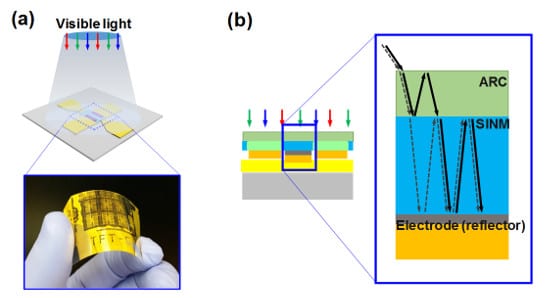 a) An optical image of the flexible silicon phototransistor on a bent plastic substrate. b) A schematic of incident light paths enabled by the innovative “flip-transfer” fabrication method.

Like our own eyes, phototransistors essentially sense and collect light, then convert that light into an electrical charge—the strength of which is proportional to the intensity and wavelength of light. In the case of our eyes, the electrical impulses transmit the image to the brain, while in a digital camera, that electrical charge then becomes the long string of 1s and 0s that ultimately creates the digital image.

While many phototransistors are fabricated on rigid surfaces and therefore are flat, Ma and Seo’s phototransistors are flexible, meaning they can easily mimic the behavior of mammalian eyes. “We actually can make the curve any shape we like to fit the optical system,” says Ma. “Currently, there’s no easy way to do that.”

One important aspect of the success of the new phototransistors is the researchers’ innovative “flip-transfer” fabrication method, as shown in the image above (b), in which their final step is to invert the finished phototransistor onto a plastic substrate. At that point, a reflective metal layer is on the bottom. “In this structure—unlike other photodetectors—light absorption in an ultrathin silicon layer can be much more efficient because light is not blocked by any metal layers or other materials,” says Ma.

In fact, that metal layer reflects light. The researchers also placed electrodes under the phototransistor’s ultrathin silicon nanomembrane layer. The metal layer and electrodes each act as reflectors and improve light absorption without the need for an external amplifier. “There’s a built-in capability to sense weak light,” says Ma.

Ultimately, the new phototransistors open the door of possibility, says Ma. “This demonstration shows great potential in high-performance and flexible photodetection systems,” he says. “It shows the capabilities of high-sensitivity photodetection and stable performance under bending conditions, which have never been achieved at the same time.”

The researchers are patenting the technology through the Wisconsin Alumni Research Foundation. Funding for the work came from the US Air Force.