Good news all around for OLED displays 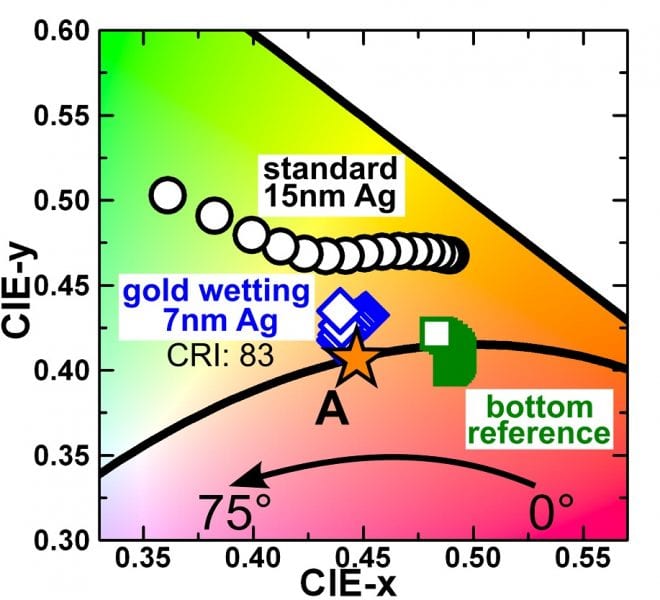 Light-emitting diodes (LEDs) are used heavily in modern display technologies and are generally accepted as the lighting source of the future, with an efficiency well above the incandescent sources slowly being phased out across large parts of the world.

However, the angular dependence of viewing images on LED screens is a known challenge. Faithfully reproducing images for a viewer directly facing the screen is no problem, but viewers sitting at greater angles will see increasing distortions, including angular colour-shifting—a shift in the perceived colours in the image at greater viewing angles. Of particular importance is the correct reproduction of white light, which can lead to more viewing problems than shifts in the colours or even reduced contrast.

For reasons of ergonomics, international standards now require a minimum viewing cone: the space describing the positions around a screen at which the viewer can expect the correct reproduction of an image.

Top-emitting organic LEDs have many desirable properties for incorporation into display technologies, however, they usually require two metal electrodes. These electrodes cause micro-cavity effects which lead to narrowing of the emission spectrum and a strong angular colour-shift compared to bottom-emitting OLEDs, narrowing the viewing cones on OLED displays.

Researchers working in Dresden, Germany, have developed a method to fabricate very thin transparent metal electrodes with a high transmittance and conductivity. When accompanied by a 2 nm gold wetting layer, the electrodes can be reduced to only 5 nm thick, greatly reducing the micro-cavity effects and therefore leading to a greater angular colour stability as well as significantly improved efficiency of their white OLED device compared to analogous bottom-emitting designs.