Glutathione-sensitive nanoparticles get drugs straight to the source of cancer 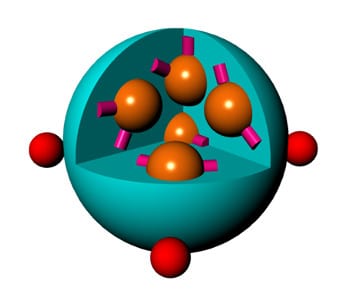 Cancer is one of the the leading causes of death worldwide. According to The World Health Organisation, over 8 million people died of cancer in 2012. Chemotherapy is the mainstay of second-line treatment options after surgery. For treatment of metastatic cancers, moreover, chemotherapeutics with combinational regimens is often considered the first-line treatment option in clinical settings. However, the use of conventional anticancer agents has been highly limited due to the random tissue-distribution of cytotoxic anticancer drugs following systemic administration, which can cause non-specific toxicity to the normal tissues. Given the severe toxicity of anticancer agents, the injectable dose is also limited, and thus the therapeutic efficacy lessens. 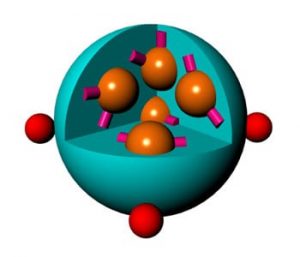 A schematic of the doxorubicin-loaded nanoparticle.

In an effort to reduce toxicity to normal tissues and to improve therapeutic efficacy of anticancer drugs, Prof. Jae Hyung Park (Sungkyunkwan University, Republic of Korea) and his colleagues have developed a tumor-targeted, bioreducible nanoparticle system that can deliver cytotoxic anticancer drugs to tumor tissues and release the drugs inside cancer cells in response to the intracellular molecule glutathione. The nanoparticle is readily prepared by self-assembly of the conjugates, composed of the carboxymethyl dextran and the bile acid derivative bearing bioreducible linkage. The resulting nanoparticles can accommodate a poorly water-soluble anticancer agent (doxorubicin) in their inner cores composed of hydrophobic bile acid molecules, and water-soluble carboxymethyl dextran outer shell encloses hydrophobic inner cores and drug molecules, protecting drug molecules in the bloodstream after administration.

With use of a fluorescence imaging technique, Prof. Park and his research team successfully delineated tumors by monitoring fluorescence dye-labeled nanoparticles accumulating in the tumor tissues by targeting tumor-specific leaky blood vessels. They also visualized the released drug inside cancer cells, resulting from the glutathione-specific cleavage of linkage between inner cores and outer shell molecules. The systemic administration of nanoparticles loaded with doxorubicin, furthermore, inhibited tumor-growth of SCC7 head and neck cancer xenograft models by over 70% compared to non-treated control mice and by over 40% in comparison with conventional free doxorubicin-treated mice without severe side effects. This research revealed great potential of bioreducible carboxymethyl dextran nanoparticles for the applications of targeted tumor therapy. The scientists reported this work in a paper published in Advanced Healthcare Materials.