Getting renewable ethers on the road

Clean-burning synthetic fuels made from renewable ethers could replace carbon-based fuels and contribute to a cyclic carbon economy. 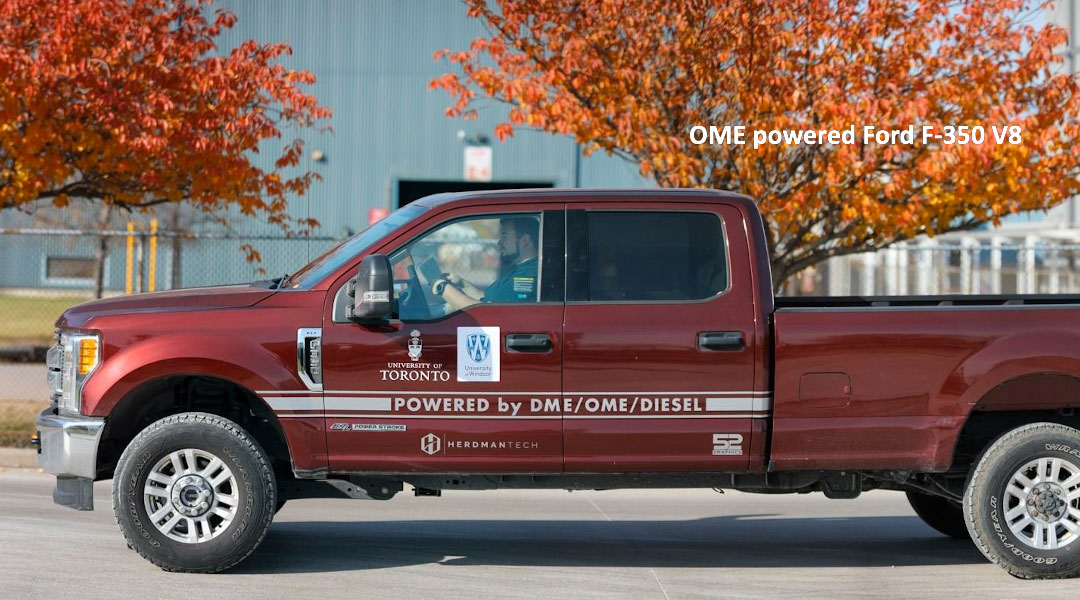 An interesting opinion regarding carbon dioxide (CO2) capture and utilization is that society doesn’t necessarily need to decarbonize to become sustainable, but to deploy more renewably-sourced carbons or de-fossilize. Instead of storing captured CO2 indefinitely, the idea is to use it cyclically to power our economies with energy-dense, renewable, carbon-containing fuels.

Synthetic fuels like renewable ethers (or XMEs) might hold the answer. A group of these chemicals known as oxymethylene ethers in particular have been gaining attention recently as they do not release soot or hydrocarbons upon combustion and have the potential to play an important role in a cyclic carbon economy. XMEs are chemical products characterized by a repeating [–CH2–O–] structure that incorporates increasing quantities of carbon, hydrogen, and oxygen atoms as the chain gets longer. The important thing to note here is that the carbon and oxygen constituents of these molecules are derivable from CO2 in the form of their precursors methanol and formaldehyde, making them interesting from a CO2 capture and utilization standpoint.

A short-chain XME known as dimethyl ether (DME, n = 0), has found application in aerosol spray propellants, cooking fuels, refrigerants, pesticides, solvents, as a chemical intermediate, hydrogen carrier, and for industrial power generation, the latter which could be the key to lower the carbon intensity of electrical grids that power our economies. Like oxymethylene ethers, DME is also a prospective renewable transportation fuel as it is cleaner burning, more biodegradable, and acceptable in terms of volume equivalent energy compared to fossil-diesel. Both DME and OME’s can be used in diesel engines making them suitable for heavy, long-haul transport where other alternatives to carbon-based fuels, such as batteries, become burdensome in terms of weight, charging times, and charging infrastructure. The main driver to make longer-chain XMEs is that their properties allow them to exist as liquids at ambient conditions (DME is a gas at ambient conditions) and have better fuel properties than shorter chains.

Companies like Oberon Fuels based in California are making headway in deploying synthetic fuels, and have recently announced the scaled-up commercial production of renewable DME (rDME) from waste methanol, biogas from dairy waste, food and agriculture waste resulting in an ultra-low carbon fuel. In addition to rDME for fuel, their modular production approach adds another technology to the toolbox (like solar-PV) that can provide clean, decentralized industrial power generation.

Due to the compatibility of liquified petroleum gas (e.g., barbeque fuel) with rDME, Oberon’s strategic investor Suburban Propane is exploring rDME/propane blends that offer a pathway to lowering the fossil-based carbon footprint of their product. Oberon has also partnered with Ford Canada, Volvo Trucks, and Mack Trucks to create rDME-running vehicles that have been modified both in terms of their fuel component materials, fuel additives, engine timing, and emission control, among others.

Together, these industry partners want to reimagine the transportation sector by reducing its carbon footprint emissions and improving air quality, all while creating jobs in local communities. Other companies such as Germany’s NAMOSYN, are also exploring XME based fuels with 39 research and industrial partners including top carmakers (Audi, BMW and Mitsubishi), chemical manufactures (BASF and BP), and engineering firms (Bosch), and have so far committed ~€ 24 million to the project.

Given the current level of investment and industrial interest, by 2025 the market for rDME fuel is expected to reach ~US$ 10 billon. But to further enable market penetration, high-throughput gas-phase synthesis of the short-chain homologues will be important. Lowering the temperature of the heat-releasing DME synthesis step will enable researchers to explore gas-phase synthesis technologies where past research efforts were typically focused on lower-throughput liquid-phase technologies that buffered the temperature better. Using light assistance at low temperatures can help accelerate the production rate without needing heat. A key gas-phase technology is fluidized bed reactors that can be used to carry out the chemical reactions and incorporate good heat management and light. Thoughtful engineering to maximize CO2 incorporation in one-step DME synthesis is also an ongoing research topic, to improve the net-negative CO2 emissions.

Industry partnerships will be key to enabling research and development that will integrate these new fuels into their existing products and infrastructure.