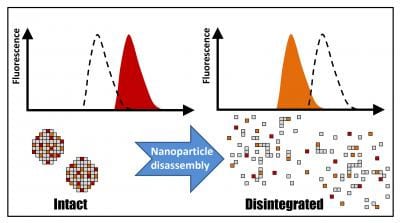 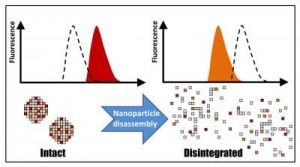 Nanoparticles have been heralded as a potential “disruptive technology” in biomedicine, a versatile platform that could supplant conventional technologies, both as drug delivery vehicles and diagnostic tools.

First, however, researchers must demonstrate the properly timed disintegration of these extremely small structures, a process essential for their performance and their ability to be safely cleared out of a patient’s body after their job is done. A new study presents a unique method to directly measure nanoparticle degradation in real time within biological environments.

“Nanoparticles are made with very diverse designs and properties, but all of them need to be eventually eliminated from the body after they complete their task,” said cardiology researcher Michael Chorny, Ph.D., of The Children’s Hospital of Philadelphia (CHOP). “We offer a new method to analyze and characterize nanoparticle disassembly, as a necessary step in translating nanoparticles into clinical use.”

The CHOP team has long investigated biodegradable nanoparticles for medical applications. With diameters ranging from a few tens to a few hundreds of nanometers, these particles are 10 to 1000 times smaller than red blood cells (a nanometer is one millionth of a millimeter). One major challenge is to continuously monitor the fate of nanoparticles in model biological settings and in living cells without disrupting cell functions.

“Accurately measuring nanoparticle disassembly in real time directly in media of interest, such as the interior of a living cell or other types of complex biological milieu, is challenging. Our goal here was to develop such a noninvasive method providing unbiased results,” said Chorny. “These results will help researchers to customize nanoparticle formulations for specific therapeutic and diagnostic applications.”

The study team used a physical phenomenon called Förster resonance energy transfer, or FRET, as a sort of molecular ruler to measure the distance between the components of their particles.

For this, the researchers labelled their formulations with fluorescent probes exhibiting the radiationless transfer of energy, i.e., FRET, when located within the same particle. This process results in a special pattern of fluorescence, a “fingerprint” of physically intact particles, which gradually disappears as particle disassembly proceeds. This change in the nanoparticle fluorescent properties can be monitored directly without separating the particles from their environment, allowing for undistorted, continuous measurements of their integrity.

“The molecules must be very close together, just several nanometers apart, for the energy transfer to take place,” said Chorny. “The changes in the fluorescence patterns sensitively reflect the kinetics of nanoparticle disassembly. Based on these results, we can improve the particle design in order to make them safer and more effective.”

The rate of disassembly is highly relevant to specific potential applications. For instance, some nanoparticles might carry a drug intended for quick action, while others should keep the drug protected and released in a controlled fashion over time. Tailoring formulation properties for these tasks may require carefully adjusting the time frame of the nanoparticle disassembly. This is where this technique can become a valuable tool, greatly facilitating the optimization process

In the current study, the scientists analyzed how nanoparticles disintegrated both in liquid and semi-liquid media, and in vascular cells simulating the fate of particles used to deliver therapy to injured blood vessels. “We found that disassembly is likely to occur more rapidly early in the vessel healing process and slow down later. This may have implications for the design of nanoparticles intended for targeted drug, gene or cell therapy of vascular disease,” said Chorny.

The current research, said Chorny, while immediately relevant to restenosis therapy and magnetically guided delivery, has much broader potential applications. “Nanoparticles could be formulated with contrast agents for diagnostic imaging, or could deliver anticancer drugs to a tumor,” he said. “Our measuring tool can help researchers to develop and optimize their nanomedicine formulations for a range of medical uses.”