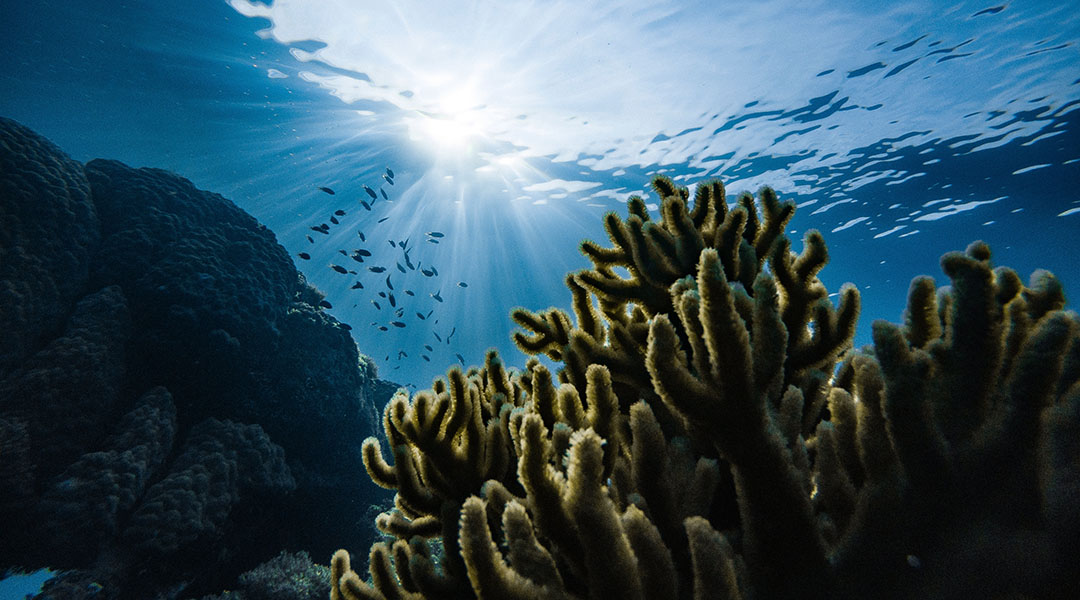 Increasing human activity is altering oceanic physio-chemical properties, which is having drastic effects on marine communities worldwide. In order to monitor those effects, and obtain a better understanding and develop suitable countermeasures, new animal-based sensors need to be developed and applied in combination with data processing methods. Salinity is one of the pivotal ecological and environmental factors that have an immense effect on the water cycle, plant growth, marine organisms, and consequently, the Earth’s habitability. Small fluctuations in the salinity of the ocean have already been linked to major changes in ocean dynamics. Marine environment measurements are therefore challenging due to corrosion and biofouling that corrupt sensor signals.

The development of in situ biologging systems has allowed researchers to record the salinity of water from free‐range animals as they swim through their natural environments. The incorporated conductivity, temperature, and depth (CTD) sensors are fabricated using traditional techniques. Hence, they are not mechanically flexible, are bulky, and do not address the effect of biofouling, which limits their useful lifetime. Another issue is that available devices are only compatible with large marine animals, but too intrusive to be used on smaller species or young animals. 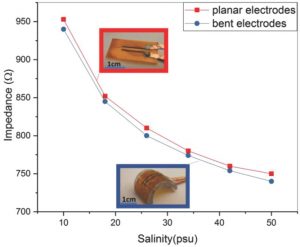 Sensor impedance as a function of salinity for the planar and bent (1 cm radius of curvature) configurations. The insets show photographs of the sensors.

The research group of Prof. Jürgen Kosel of King Abdullah University of Science and Technology (KAUST) in Saudi Arabia, has proposed a lightweight, printed, flexible graphene sensor for salinity sensing in seawater. The group’s results were published in a recent issue of Advanced Materials Interfaces.

Using a laser printer, graphene electrodes were produced on polyimide substrates, resulting in sensors that operate under various bending conditions, while a single step fabrication process enables customization and mass fabrication. The outstanding sensor characteristics enable a less-intrusive attachment to the non-planar and curved surfaces of marine animals. Underwater deployment of the sensors in the Red Sea, which is the warmest (up to 36°C in surface waters) and saltiest (20% above standard ocean salinity) of all seas, revealed its capability to withstand the corrosive conditions in this harsh environment.

Biofouling is widely acknowledged as a serious problem that affects the performance and operational efficiency of underwater equipment, especially after extended periods of operation. As a solution, it was found that an impedance measurement at high frequency (MHz range) can overcome the effect of biofouling and reliably measures salinity even after several weeks of deployment in the waters of the Red Sea. The reason for this is that microorganisms attached to the electrode surface act like additional capacitors with diminishing influence on electrical measurements at high frequency. Considering its reliability for long-term underwater measurements, the researchers expect that these versatile, wearable graphene sensors will play a pivotal role in the fast-growing field of marine sensor networks.

Next steps in their ongoing research are expanding the sensorial functions of the laser-induced transducer to create a high-performance platform for temperature, pressure, salinity, pH, flow, magnetic field and others. Integrating a wide range of such sensors with data management systems will provide increased observation and diagnostic capacities for marine ecosystems.

Read more about their findings here in the full article on Advanced Materials Interfaces.