NASA has published the first five images from the James Webb Space Telescope, highlighting each of the key questions it will study. 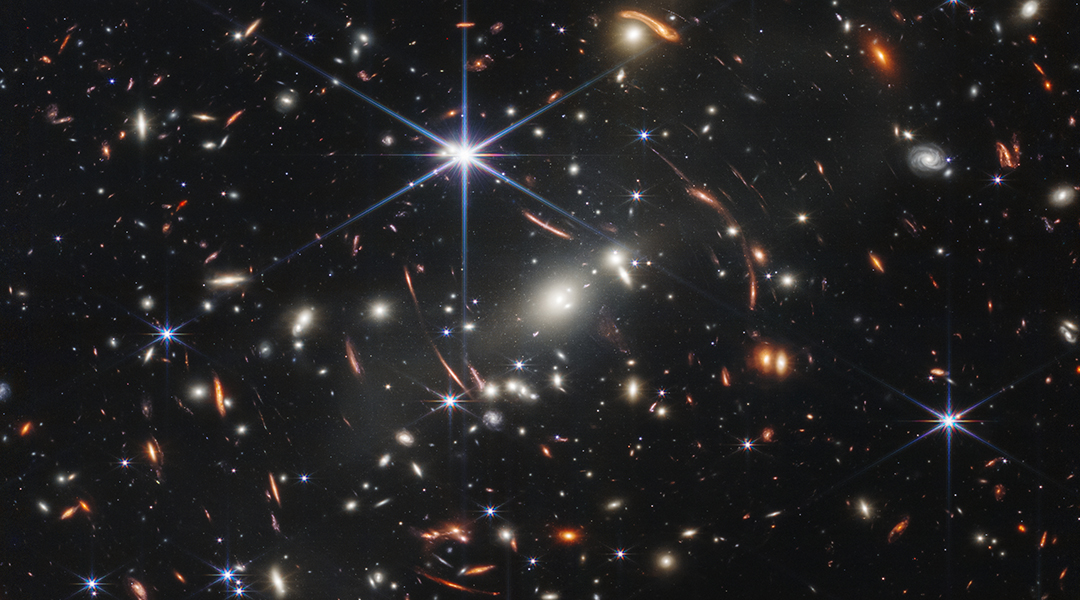 After nearly three decades in the planning, NASA have published the first images from the James Webb Space Telescope (JWST).

This comes after a week of preview images being released. Last night, US president Joe Biden unveiled the first image: a false-colored infrared view of Webb’s First Deep Field. Centered on the galaxy cluster SMACS 0723, the cluster contains thousands of galaxies – including the faintest objects ever observed in the infrared – which have appeared in Webb’s view for the first time. It covers a patch of sky approximately the size of a grain of sand held at arm’s length by someone on the ground.

Infrared images of five objects have been shared in the initial public release highlighting the many scientific problems that JWST will address.

Unveiled by President Biden yesterday, this snappily named object is a nearby galaxy cluster. These massive objects are useful in observing the conditions in the early Universe. The sheer density of matter distorts space and magnifies light originating from distant galaxies that are behind it but lie along the same line of sight. Exploiting this process of gravitational lensing is one of several ways that JWST will image the conditions of the early Universe and try to understand more about how the first stars and galaxies formed.

Galaxies can exist in many different environments. A particularly dramatic example of this, located at around 290 million light years away, is Stephan’s Quintet. Four out of the five galaxies in this group are caught in a cosmic dance of repeated close encounters. Interactions like these are one of many factors that can shape how galaxies change across cosmic time. By studying objects like Stephan’s Quintet, JWST will help us understand how galaxies, and the supermassive black holes at their centers, form and grow.

Located at around 7600 light years from Earth in the Carina constellation, the Carina Nebula is one of the largest and brightest nebulae in the sky. This stellar nursery is home to countless stars, many of which are several times larger than the Sun. However, these regions are often very dusty which scatters visible and UV light, hiding potential clues about how star formation occurs in these nebulae. Infrared light, however, has a longer wavelength than optical or ultraviolet so it can pass through this obscuring dust unaffected. JWST’s infrared observations will provide new detail about star formation in these objects.

The gas rings that form the birthplace of planets also light up in the infrared. The Southern Ring, or “Eight-Burst” nebula, is a planetary nebula – an expanding cloud of gas, surrounding a dying star. It is nearly half a light year in diameter and is located approximately 2000 light years away from Earth. JWST will be able to shine new light on the chemical composition and processes that govern the formation of planets outside our solar system.

JWST will also observe fully formed planets. WASP-96 b is one of the thousands of exoplanets discovered in recent years. The planet, located in a solar system nearly 1150 light years from Earth, orbits its star every 3.4 days and has about half the mass of Jupiter. By splitting up the observed light into its component wavelengths, we can detect exoplanets.  Dips in the light of its host star mean that an exoplanet has passed in between the star and telescope. The light could also interact with the planet’s atmosphere leaving behind chemical clues. Using this method, JWST will massively expand our catalogue of known exoplanets, and search for those whose atmospheres could support life.

The satellite’s journey to this point has not been easy. Plagued by delays and budget overspends, the JWST was finally launched on Christmas Day 2021 on an Ariane 5 rocket from French Guiana. Once in orbit, however, it had to perform a series of innovative and nail-biting setup processes.

Astronomers were most nervous about the unfurling of the 21 m sunshield.  This structure reflects heat and light from the Sun, allowing JWST’s instruments to cool down to below 50 K (–223 °C) and observe infrared light in unprecedented detail. The deployment of this multi-layered structure took place over the course of a week, and involved the perfect performance of hundreds of separate components. Despite their worries and the hundreds of possible failure points, it deployed without a problem.

Next, the primary mirror had to be assembled. JWST was designed with a 6.5 m mirror, over three times the size of that in the Hubble Space Telescope. Such a large mirror would not fit in the launch rocket. To overcome this, astronomers broke it down into 18 interlinking hexagonal segments which would be unfolded in orbit. As with the sunshield, such a feat had never before been accomplished. However, JWST’s incredible engineering rose to the challenge, and a week later, the mirror was successfully unfolded.

After a month JWST arrived at its final orbit site, a place known as the second Lagrange point, or L2, around 1 million miles from Earth. This is one of five regions of space in which the gravitational forces of both the Earth and Sun balance out. It also coincides with the night-side of the Earth. Sending JWST here allows it to orbit the Sun at the same speed as the Earth, and makes sure JWST’s sensitive optics always point out into space, never towards the Sun’s harsh radiation.

From here, JWST will begin its 5-year mission to observe the infrared sky in unparalleled detail. The astronomical community now waits with bated breath to see what wonders it will uncover.