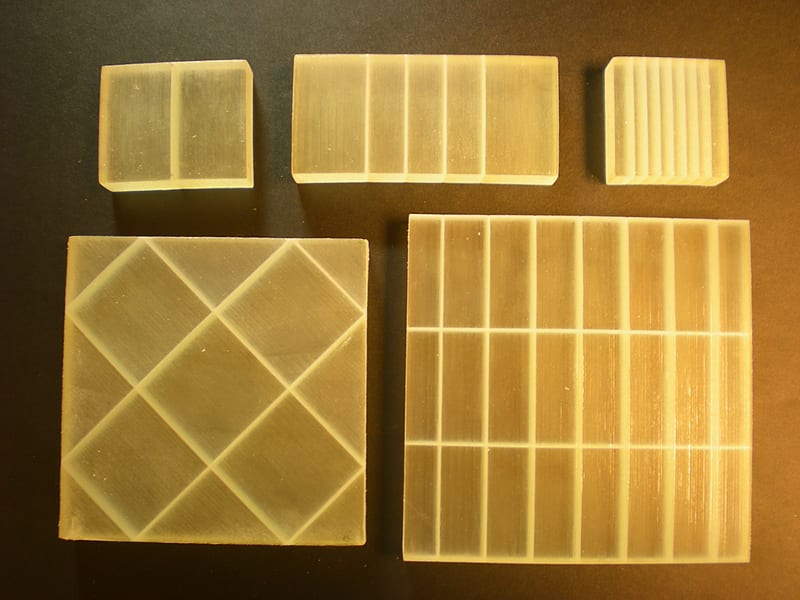 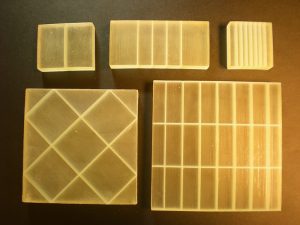 Many natural composite materials have evolved to wrinkle in response to certain stimuli: The eye of the squid is lined with wavy layers of silvery reflectors that give it a silvery sheen. In the cell walls of many plants, wrinkles allow expansion without strain. Finally, the inner lining of arteries contain wrinkled lamellae that can be indicators of coronary heart disease, and can serve as markers for the condition.

Given these examples from nature, scientists say that understanding the mechanisms by which materials internally wrinkle could help in creating new, responsive materials for use in chemical sensing, medical diagnostics and optical and acoustic wave control.

Now researchers at MIT have identified the mechanics involved in the wrinkling of thin interfacial layers within soft composite materials, and developed a model based on material properties and geometry to predict how wrinkled an internal layer may become, given its stiffness and width. The researchers also fabricated composite materials using multi-material 3-D printing, and observed the wrinkling and instability pattern — results that were correctly predicted by their model.

Narges Kaynia, a graduate student in mechanical engineering at MIT, says the model may serve as a blueprint for developing new composite materials with reversibly wrinkling interfaces.

“Based on the materials and geometry of the composite structure, the equations we’ve developed predict whether the interfacial layers will wrinkle or not, and the wrinkling pattern that might be achieved,” Kaynia says. “It’s very fundamental knowledge that has a lot of applications.”

In their studies, the researchers concentrated on an ideal structure they describe as a series of interfacial layers within soft layered composites: basically, relatively stiff and thin layers separating thicker layers of a soft rubbery material. This configuration is similar to the cross section seen in natural structures such as arteries and cell walls, and allows for reversible wrinkling: When compressed, the stiff, thin layers may buckle or wrinkle, depending upon the force applied; when that force is removed, the surrounding rubbery layers spring back, straightening out the wrinkled layers.

The researchers looked for ways to predict when wrinkling would occur — and the pattern of the wrinkling in such a configuration — given the stiffness of the layers, the geometry and the load applied. Li worked out equations to describe the configuration’s potential for wrinkling, and found that in general, the greater the difference in stiffness between the surrounding rubbery material and the interfacial layer, the less load is required to create wrinkling. The model predicts the wavelength and amplitude that the wrinkles will take once a critical load is reached.

To verify their analytical model, the researchers observed results from experiments. The team used a multimaterial 3-D printer to fabricate structured composites of varying stiffness and geometries. All samples retained the same stratified configuration.

“3-D printing is a fast prototyping technology,” Li says. “It’s very convenient for creating complicated geometries and parts with multiple materials. We can print microstructured materials and we know exactly what their properties are.”

The team then placed each sample in a mechanical compression machine, and measured the load required to create wrinkles in the material and the wrinkling patterns created. In the end, their measurements closely matched their model’s predictions.

Using their models, Li and Kaynia say scientists can precisely engineer biomimetic materials with interfacial layers that reversibly wrinkle on demand, much like composites found in nature. Such materials may be designed to wrinkle in response to mechanical, chemical or optical stimuli.

“For example, you could design a material for structural coloring,” Kaynia says. “The composite material can be designed to react to certain environments and create wrinkles that prevent certain wavelengths from penetrating. And if you, for example, want to use it for camouflage, you would want it to be reversible too.”

Yonggang Huang, a professor of civil and mechanical engineering at Northwestern University, says the group’s results now make it possible for scientists to create new materials and actively control stretching and other material properties.

“The [wrinkling] of materials can generate new functionalities that have never been achieved before,” Huang says. “The authors have studied this important phenomenon [and] this is the first demonstration of reversible wrinkling of interfaces in multilayered materials.”