A simple method for 3D patterning of cell co-cultures has been developed based on capillary forces in a nanostructured microchannel. 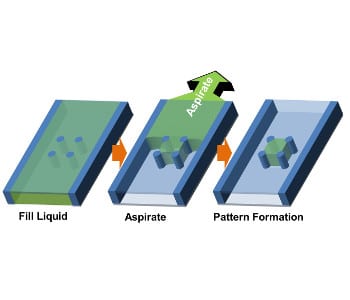 Micrometer-scale patterning and manipulation of cells has tremendous potential in biotechnology, from cell-based sensors and high-throughput screening devices to the mimicking of cell micro-environments. For this purpose, soft-lithographic methods such as microcontact printing and micromolding in capillaries are typically used. While these methods convey numerous advantages over traditional lithographic methods (e.g. photolithography) and do permit manipulation of single cells, they can only be applied to adherent cells, require additional processing steps, and are difficult to use to create complex patterns or co-cultures of different cell types.

Overcoming these limitations, a straightforward patterning method dubbed “capillarity-guided patterning” has been developed by researchers at Seoul National University, which is based on meniscus dynamics driving the patterning of a liquid or hydrogel inside microchannels. In brief, microstructures are positioned inside the channel (soft-lithographic patterning was used to prefabricate the lower surface in this case) and microliquids or microgels are simply filled into and drained from the channel. While the liquid is drained upon aspiration from non-structured regions of the surface, capillary action serves to confine it between the microstructures (this process is depicted in the figure below).

Concept of capillarity-guided patterning of liquids and hydrogels.

Although alternative methods exist for patterning pico/nanoliter volumes of liquids and hydrogels, this new approach has several important advantages. Apart from the simplicity of filling and aspirating the microchannel to produce large arrays of liquids or hydrogels in a matter of seconds, this method is shown to be robust, scalable, applicable to a range of different patterns and materials, and does not require any specialised equipment or complex processing steps.

The researchers successfully applied their new technique to fabricate patterned 3D cell cultures. This is justifiably a hot research area as it facilitates the development of novel biotechnological platforms (e.g. for organ-on-a-chip and high-throughput screening systems). Patterns of cell-laden hydrogels (both with individual and multiple cells) and different cells types (primary neurons, cancer cells, HUVECs and microalgae) were produced. In particular, cancer cell-HUVEC co-cultures were created as a 3D in-vitro model of cancer angiogenesis that mimics cell–cell and cell–extracellular matrix interactions (see figure above). Conceivably, this system could also be used to study long-term dynamics of events such as cell migration during metastasis. It is anticipated that this work will have important implications for future developments in the engineering of 3D cell micro-environments.