The Evolution of Inorganic Halide Perovskites in Optoelectronics

An outline of the recent progress in the syntheses of IMH perovskites is provided. 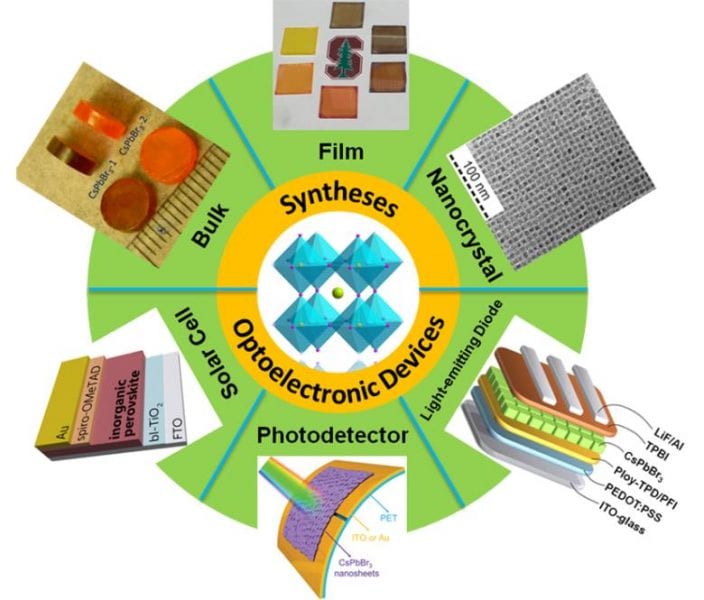 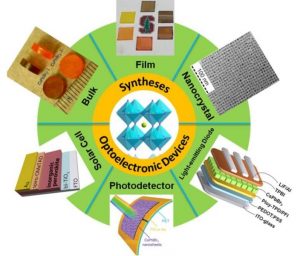 OMH perovskites with the general formula of ABX3 compose of three different species, where A is a monovalent cation (methylammonium, CH3NH3+, MA+; formamidinium, CH3(NH2)2+, FA+), B is a tetravalent metal cation (B = Pb; Sn; Ge), and X is a halide anion (X = Cl; Br; I).

During the past eight years, solution-processed OMH perovskites have become some of the most notable materials because they can exhibit high solar cell efficiency exceeding 20%, which is comparable to copper indium gallium diselenide solar cells and close to commercial monocrystalline silicon solar cells.

Moreover, the high performances of OMH perovskites have been applied for other optoelectronic devices, such as photodetectors and light-emitting-diodes, showing its great potential. However, due to the volatile and hygroscopic nature of the organic cations, OMH perovskites suffer from chemical instability, especially at high temperatures.

Therefore, all-inorganic metal halide (IMH) perovskites (CsBX3, B = Pb, Sn, Ge; X = Cl, Br, I) are rapidly emerging as promising alternatives to OMH perovskites. This is mainly due to their superior stability and comparable properties, such as strong emission, high fluorescence quantum yield and a tunable bandgap, covering the entire visible spectrum.

In a recently published Review Article in Solar-RRL, the scientists provide an outline of the recent progress in the syntheses of IMH perovskites. In addition, the development of IMH perovskites research in optoelectronic devices, such as perovskite solar cells, photodetectors and light-emitting diodes is introduced.

Finally, the challenges facing the field of IMH perovskites are discussed and possible solutions are suggested based on the available literature.

The text was generously provided by Dr. Jia Liang and edited by Ekaterina Perets.