Professor Feng Zhang from Guangzhou Medical University, Professor Hao Pei from East China Normal University, and co-workers report a flexible electrochemical sensor based on a 3D-printable hydrogel. The device could be used as a glucose sensor, demonstrating its potential in biosensing applications. 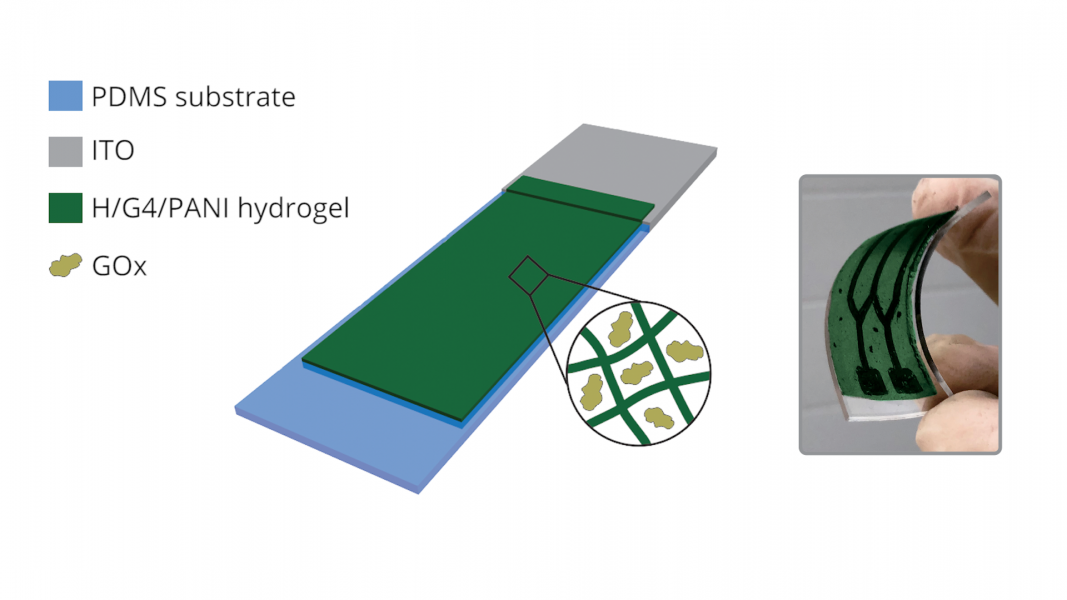 Printing is a fast and efficient method to reproduce an ink-based pattern. In a similar way, hydrogel “ink” can be 3D-printed into complex hierarchical structures. In-vivo printing of biologically compatible hydrogel could lead to 3D-printable bioelectronics.

Cation-templated assembly of guanosine (G)-boronate diesters formed a G-quartet motif that could be stacked in the presence of hemin to produce an enzyme-like, nanofibrous hydrogel. Step strain measurements demonstrate that the hydrogel could switch between a quasiliquid state at 50% strain to a self-standing hydrogel at 0.1% strain. The hydrogel could therefore be injected through a needle onto a substrate, where it maintains its structure.

At a molar ratio of 12:1 for G to hemin, the hydrogel was shown to mimic peroxidase during  hydrogen peroxide/tetramethyl benzidine (H2O2/TMB) oxidation and significantly enhanced the catalytic activity compared to free hemin.

During the oxidation of aniline by H2O2 to polyaniline (PANI), an ≈2-nm-thick layer of PANI was deposited on the catalytic hydrogel matrix. Proton doping of the hybrid gel resulted in an electrically conductive, dark green hybrid hydrogel, which was confirmed by characteristic I–V curves and absorption spectra.

As a proof of concept, the researchers fabricated a glucose biosensor by loading glucose oxidase (GOx) enzyme into the hybrid hydrogel. The electrocatalytic currents increased monotonically for the GOx-loaded hybrid hydrogel under different concentrations of glucose, demonstrating its potential as a glucose sensor.

To find out more about this promising nanofibrous hydrogel, please visit the Advanced Materials homepage.