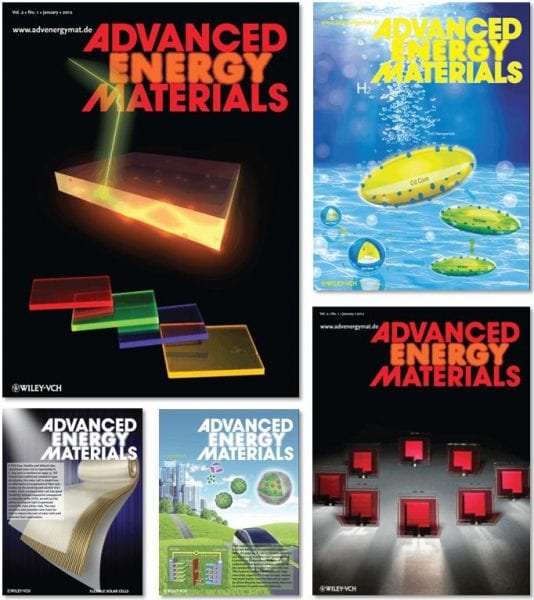 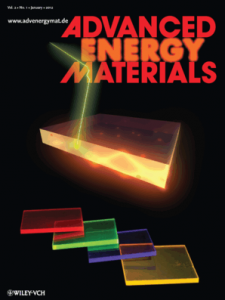 Luminescent solar concentrators (LSCs) capture sunlight and re-emit it at longer wavelengths. Trapped in the plane of a polymer sheet, the light can be collected by a photovoltaic cell mounted on the edge of the concentrator. This concept allows stronger than natural illumination of the solar cell and saving on the photovoltaic materials as well as optimisation of the electricity yield by introducing further finetuning parameters such as the colouration of the LSC, its shape and size as well as suitability for different light conditions. Paul P. C. Verbunt and Michael G. Debije review the field’s progress over the last three decades. The challenges addressed include the maximising of photon-to-electron conversion and how to minimise losses, and an outlook into the urban application potential is given. 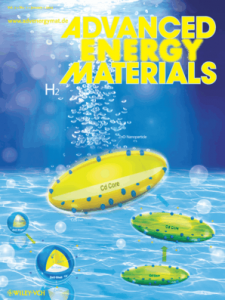 Producing hydrogen from water is a particularly attractive way of winning chemical energy from sunlight. Max Lu, Hui-Ming Cheng and co-workers report a novel heterostructure consisting of a cadmium metal core surrounded by a zinc oxide/cadmium sulfide shell capable of efficient photocatalytic hydrogen evolution. The improved yield is down to the charge-carrier transport ability of the metallic core leading to better recombination of photoexcited electrons from ZnO and holes from CdS based on a Z-scheme co-operation. In conjunction with a platinum co-catalyst, the heterostructure sustains a rate of 1.92 mmol H2 h−1 per 100 mg of the photocatalyst.

With indium resources being limited, replacing indium tin oxide (ITO) as a transparent electrode material is an important factor for solar cell cost and scale-up considerations. This approach is doubly attractive as alternative materials may bring improved flexibility to devices since ITO is brittle. An international collaboration of researchers from the Netherlands, Denmark, Germany and the United States led by Yulia Galagan evaluates the combination of highly conducting PEDOT:PSS and silver grids, identifying the best grid spacing for optimised current collection through both experimental results and theoretical modelling. 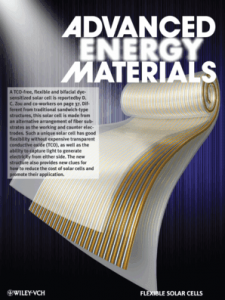 In a further paper aiming to eliminate costly oxide components from solar cells, Dechun Zou and collaborators from Peking University demonstrate a bifacial dye-sensitized solar cell that is both flexible and capable of absorbing light from either side. The authors’ approach differs from traditional sandwich-type structures by pairing up fiber substrates as the working and counter electrodes. Catalyst-coated steel and titanium wires coated with dye-sensitised TiO2 can be woven together on a PET substrate as one promising strategy for mass production.

High capacity is one make-or-break condition for batteries intended for automobile applications as range is a major factor in feasibility, and by extension, customer interest. Yuliang Cao, Jun Liu and coworkers employ scalable high-speed milling to produce a nanocomposite made of silicon carbide coated with few-layer graphene and tin oxide nanoparticles trapped between the two. As a result, lithium ion storage exceeds the theoretical capacity of the alloying reaction normally observed in common tin oxide anode materials by a factor of two.