Don’t Go With The Flow

Engineered bacteria anchor inside the intestines, for treatment of gastrointestinal damage.

Gastrointestinal mucus is constantly regenerated and expelled by the outer layer of the intestine, creating a rapid flow. As a result, conventional treatments for injuries to this protective layer are often cleared too rapidly to be effective.

In a system this dynamic, the ideal scenario for treatment would involve a material that can be easily replenished. To this end, an American team of investigators have recently used engineered bacterial cells to generate a hydrogel that could serve as a mucus mimic (see video below).

The team were able to show that this system worked effectively in a petri-dish. However, to function as a therapeutic, the bacteria must do more than simply produce hydrogel. The cells must be targeted to the intestines, adhere to the surface of the intestines, and, in this challenging environment, be able to replicate the behavior seen in vitro.

The team engineered bacteria to produce a range of different proteins that serve two key functions. One set of proteins serves as the base for hydrogel production. The bacteria excrete these proteins into the intestine, which can enable gel formation. A second set of proteins are designed to anchor the bacteria in specific areas of the body.

The team synthesized a gel that was embedded with bacterial cells and fed the gel to mice. The schematic shown above, demonstrates that the original gel was cleared from the mouse’s intestines within 24 hours.  However, the hydrogel inducing proteins that were made by the engineered bacteria were still present in the gut seven days after administration. 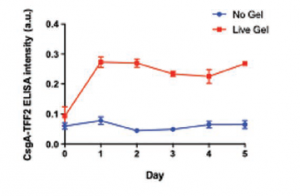 Red line represents the amount of extracellular protein produced by the engineered bacteria in the intestine.

This result suggests that the bacteria successfully anchored in the intestinal wall and continued to produce extracellular proteins. It is hoped that this proof of principle may open the door to dynamic self-regenerating treatments for gastrointestinal damage.