A device uses sound waves to detect the stiffness of an extracellular matrix, a structural network that contains cells, which researchers find can indicate the spread of disease. 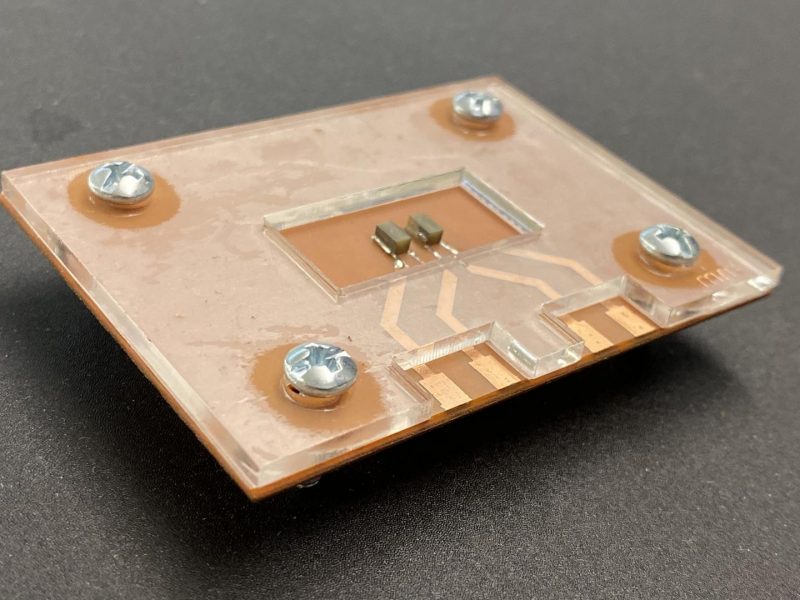 Similar to how a picked lock gives away that someone has broken into a building, the stiffening of a structure surrounding cells in the human body can indicate that cancer is invading other tissue.

Purdue University engineers have built a device that would allow disease specialists to load an extracellular matrix sample onto a platform and detect its stiffness through sound waves. The device is described in a study published in the journal Lab on a Chip.

“It’s the same concept as checking for damage in an airplane wing. There’s a sound wave propagating through the material and a receiver on the other side. The way that the wave propagates can indicate if there’s any damage or defect without affecting the material itself,” said Rahim Rahimi, a Purdue assistant professor of materials engineering, whose lab develops innovative materials and biomedical devices to address health care challenges.

Each tissue and organ has its own unique extracellular matrix, sort of like how buildings on a street vary in structure depending on their purpose. The extracellular matrix also comes with “landlines,” or structural and chemical cues, that support communication between individual cells housed in the matrix.

Rahimi’s team developed a nondestructive way to study how the extracellular matrix responds to disease, toxic substances or therapeutic drugs. The initial work for this study was performed in collaboration with the lab of Sophie Lelièvre, a professor of cancer pharmacology at Purdue, to identify how risk factors affect the extracellular matrix and increase the risk of developing breast cancer.

The device could easily be scaled up to run many samples at once, Rahimi said, such as in an array. This would allow researchers to look at several different aspects of a disease simultaneously.

Engineered fluorescent proteins for live, deep-tissue imaging of tumors
How do you sample blood in a non-invasive way?
Guideomics to live up to the promise of biotechnology for precision medicine of brain diseases
Electrified Tattoos and Personalized Biosensors