Hyperspectral imaging has the potential to better detect skin cancer to improve the survival rates of patients. 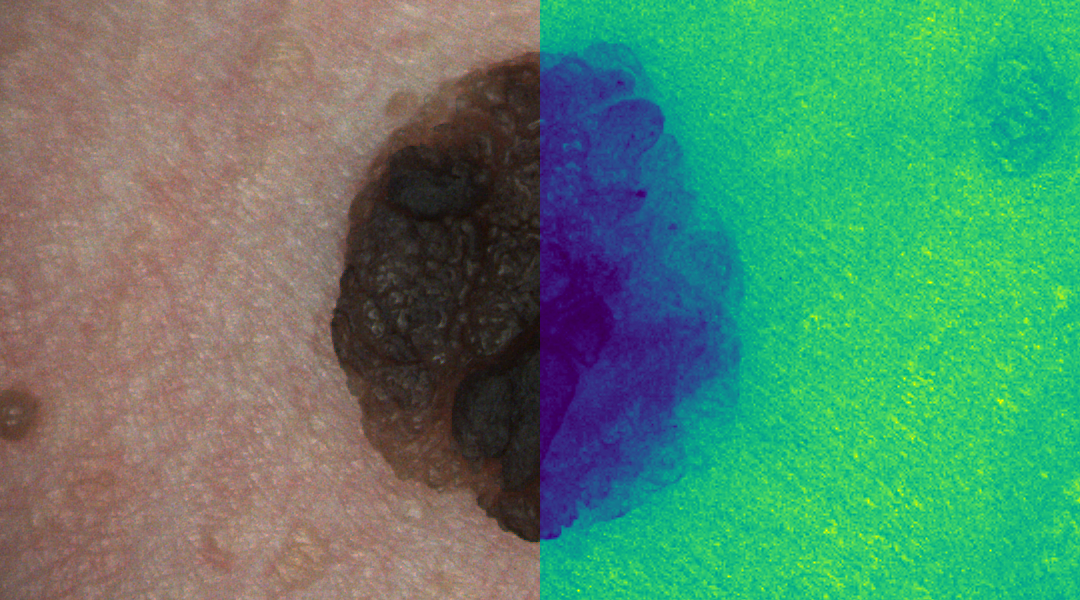 Skin cancer is one of the most common types of cancer, and in some parts of the world, it is becoming increasingly more common. Most skin cancers are not life-threatening, but one particular type called malignant melanoma is known to be quite deadly. If malignant melanoma is not detected early, it can spread beneath the surface of the skin to lymph nodes, bones, the lungs, and the brain.

Malignant melanoma is sometimes referred to as a “silent killer” because the spread of the cancerous cells happens out of sight, and symptoms might not appear before it has become metastatic. Metastatic melanoma has a 5-year survival rate of approximately 10%. However, if the malignant melanoma is detected early, the 5-year survival rate increases to approximately 95%. In other words, detecting melanoma as early as possible is crucial to saving lives.

Correctly identifying malignant melanoma in vivo at an early stage is difficult for anyone who is not an expert in the field of dermatology. Recently, a new approach to detecting and classifying skin cancer has been explored. Instead of conventional digital images using measurements from the red, green, and blue regions of the light spectrum, some research groups have explored the use of hyperspectral images to tackle the skin cancer challenge.

Hyperspectral images are created using contiguous spectral sampling across an entire range of the light spectrum, often within and beyond the visible range. Researchers from UiT, The Arctic University of Tromsø, and The University of Las Palmas de Gran Canaria have recently explored the state-of-the-art in the application of hyperspectral imaging for melanoma detection in a manuscript published in WIREs Computational Statistics. Their review suggests that the infrared region of the light spectrum is capable of capturing increased hemoglobin levels and that the ultraviolet region is capable of capturing increased water retention in cells. Both events are known to be biological indicators associated with cancer.

Rich information like this is not readily available to a dermatologist when using image-based diagnostics with conventional digital images captured using a so-called dermoscopic camera system. These specialized camera systems allow a dermatologist to capture high-resolution digital images of a skin lesion or mole, typically in conjunction with a glass contact surface used to flatten the skin region. The dermoscopic images are then used as part of the diagnostic procedure.

Because the images are captured using conventional digital camera sensors, the information is limited to the human-visible light spectrum and the surface of the skin lesion or mole. However, the information in a hyperspectral image also originates from regions outside the human-visible light spectrum, and some of the measured light also originates from beneath the surface of the skin. The authors suggest that giving medical doctors access to more abundant information afforded by hyperspectral images, in conjunction with specialized computer-assisted diagnostic systems, should improve their capability of detecting skin cancer at an early stage.

Furthermore, it should be possible to develop artificial intelligence systems capable of detecting and classifying skin cancer using hyperspectral images. Two of the significant obstacles are the lack of standardized equipment and image acquisition procedures. First, there is currently a wide range of hyperspectral imaging systems available, albeit extremely few, that have both been designed and approved for dermatological applications. Second, the different systems operate in different regions of the light spectrum, varying in spectral and spatial resolution, and having different approaches to image acquisition. These differences make it challenging to collate image datasets, develop standard algorithms, and compare published results.

Recent studies towards using hyperspectral images to catch skin cancer as early as possible are promising. However, many open questions remain, and several key challenges must be dealt with accordingly in order to make substantial headway towards significant improvements to current manual and semi-automated diagnostic procedures of skin cancer.

Tackling these challenges is crucial since detecting and correctly classifying skin cancer as early as possible is vital to saving human lives. There are also substantial socio-economic costs associated with misclassifying a benign skin lesion or mole because all suspected skin cancers are surgically removed and diagnosed by a pathologist. This process puts a burden on the medical system and drastically affects its cost efficiency. Finally, the classification and surgical removal of suspected skin cancer can be traumatic to the patient, both physically and mentally; therefore, it is essential to reduce misclassification rates.