Researchers from King Abdullah University of Science and Technology design a high-performance filtration membrane made exclusively of cyclodextrin. 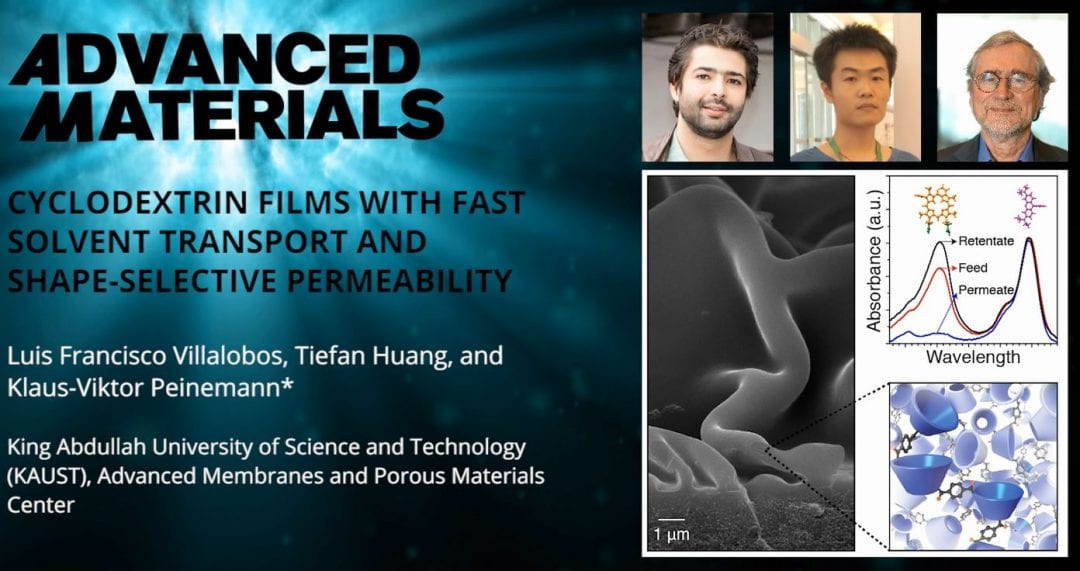 Energy-efficient physical separation on an industrial scale relies on controlling the porosity and thickness of the selective layer. The separation performance depends on the size, distribution, and connectivity of the voids, or free volume, within the membrane. Maximizing the amount of interconnected voids is crucial, but challenging. Amorphous polymers as membrane materials are not only economical but offer a variety of cavity sizes and topologies, in contrast to rigid microporous materials such as zeolites and metal–organic frameworks.

For the first time, a membrane composed exclusively of cyclodextrin is described by Tiefan Huang, Luis Francisco Villalobos, Klaus-Viktor Peinemann, and co-workers from King Abdullah University of Science and Technology in Saudi Arabia. Cyclodextrin-based polymers are appealing because cyclodextrin is intrinsically porous, non-toxic, and derived from starch, making the process environmentally friendly.

The team used β-cyclodextrin and an acid chloride to obtain thin films of β-cyclodextrin atop a commercial polyacrylonitrile (PAN) support through interfacial polymerization.

Microscopy characterization revealed varying thickness of the crumpled β-cyclodextrin films’ internal structure, but this did not inhibit the transport of solvents, which could quickly permeate the membrane. In fact, crumpled films demonstrated up to 47 times higher solvent permeance than the flat, uniformly dense films. A greater surface area and a greater extent of ester hydrolysis result in more open pathways between cyclodextrin molecules and easier access to the cavity. The crumpled film could withstand even 20 bar pressure and several aspirations through a pipette, but long-term operation resulted in decreased permeance.

Both nonpolar and polar solvents move through the β-cyclodextrin membrane at high rates and the membrane can effectively discriminate between molecules having similar molecular weight and size but different shapes, allowing them to outperform commercial alternatives.

To find out more, please visit the Advanced Materials homepage.

Using a comb made of lasers to study greenhouse gases
Climate predictions: Sometimes less is more
Closing the plastic loop with a one-pot recycling process
Using microrobots to eradicate bacteria