Creating millions of liters of aviation fuel from captured CO2

A German start-up has developed a method to convert captured carbon and hydrogen into a range of sustainable fuels. 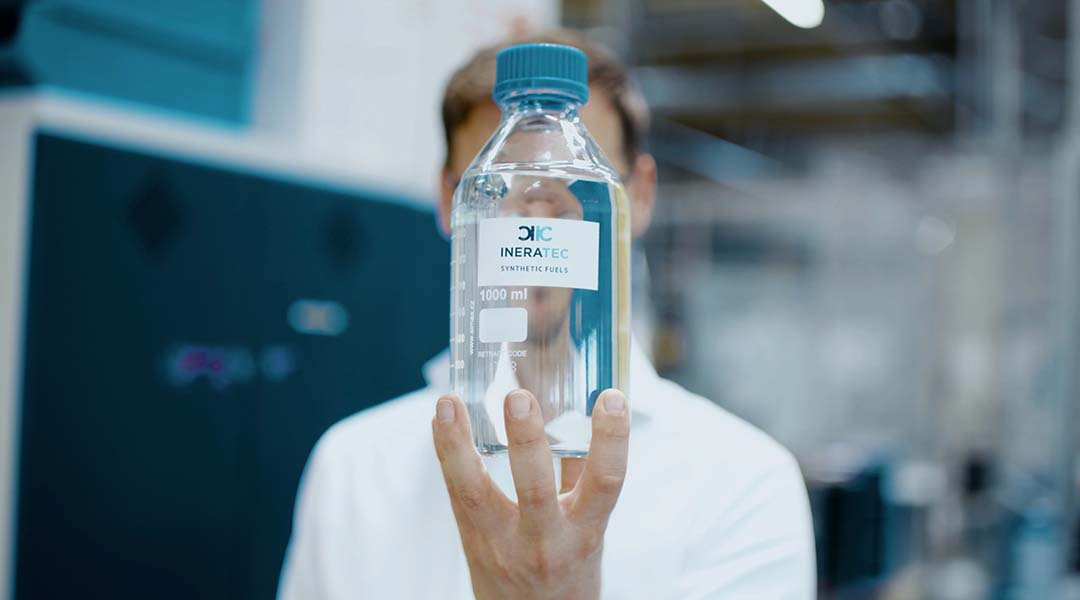 The annual use of fossil-sourced fuel for the global aviation industry has grown steadily over the past 20 years to 360 billion liters in 2019, with a hiatus of around half this value in 2020-2021 due to the pandemic. This makes up 2.5% of global greenhouse gas emissions and corresponds to approximately 880 million metric tons of CO2. It is worth noting that the effect of CO2 generated at high altitude is more pronounced than at sea level, hence the greenhouse gas effect is greater than if the equivalent amount of CO2 was emitted by other sources.

Could such a vast amount of aviation fuel be made from renewable energy and simple CO2 and H2O alone?

A start up founded by engineers from the Karlsruhe Institute of Technology (KIT) believe this is possible and already have their hands on a system-in-a-box capable of automating this very process.

Packed within an average shipping container is a myriad of stainless-steel equipment — a synthesis plant that converts captured CO2 and hydrogen into a range of fuels and products that include clean diesel, CO2-neutral gasoline, sustainable e-kerosene. These cover a range of hydrocarbon fractions that can be refined and used in aviation as well as other areas of mobility, as well as in the chemical industry.

Naturally, just as Rome was not built in a day, the proof-of-concept for this process began at the scale of a liter in a research laboratory directed by Professor Roland Dittmeyer at the Institute for Micro Process Engineering at KIT. His graduate students perfected the process using engineered microchannel reactors and catalysts that enabled an exceptionally efficient conversion of CO2 and H2O to a fuel precursor, known as Fischer-Tropsch crude, which is subsequently upgraded to jet fuel.

This success inspired the founding of the start-up, Ineratec, and subsequent industrialization and automation of their system for deployment at target sites.

Since then, the team has gradually been increasing the production capacity of these self-contained CO2 refineries. A pilot plant in the Emsland region of Lower Saxony, Germany, which began operation in 2021, has been producing more than 400,000 liters of fuel per year. Following this, Ineratec recently announced that the Series A funding award of $20M USD will be utilized to expand the production capacity of another plant close to Frankfurt Airport to an annual target of 4.6M liters made from 11,200 metric tons of CO2 starting in 2022.

To put the achievement in perspective, 4.6M liters a year of sustainable aviation fuel made from 11,200 metric tons of CO2 represents only 0.0013% of the global aviation industry’s fuel demand and will only mitigate around 0.000025% of yearly CO2.

Aviation fuel is one of many sustainable products made by these portable modular CO2 refineries. With Ineratec’s technology as a crucial first step, the future of commodity chemicals and fuel production using CO2, H2O, and renewable energy looks bright. Clearly, we must think outside of a very big box and work at warp speed to reach the gargantuan requirements of carbon neutrality, but Ineratec has made one small move towards it!

This heroic achievement is pivotal towards achieving Paris climate goals for all transportation systems, which represent a sizeable chunk of the annual 40 gigatons of CO2 greenhouse gas emissions. Thus, scaling the implementation of these CO2 refineries is critical in the planet’s fight against global warming.