The race is on to scale down the cost of sustainable aviation fuel production technologies and scale up production capacity. 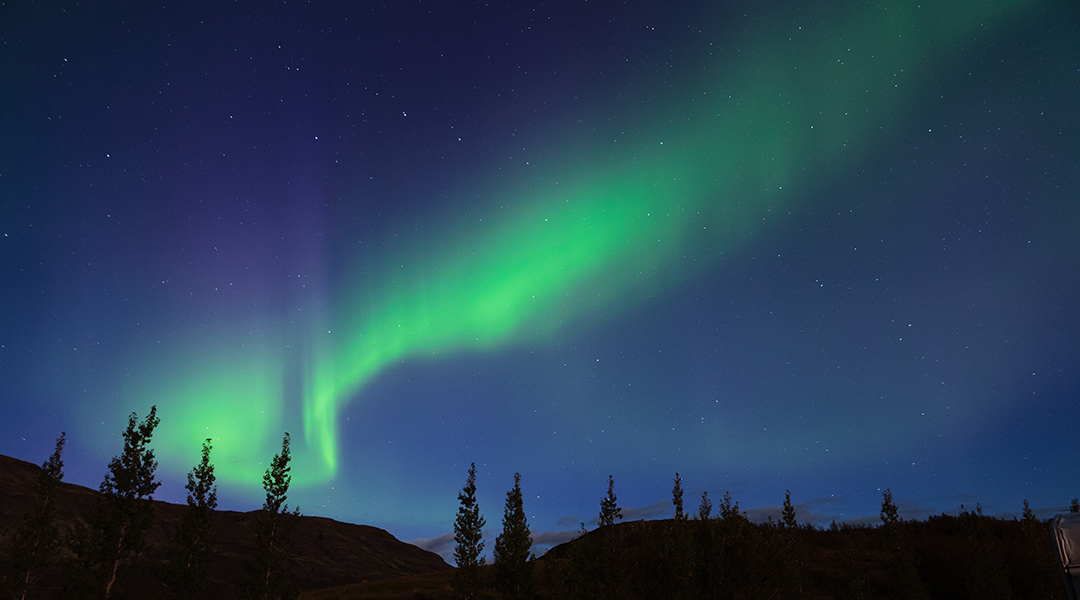 Green skies can arise from the Aurora: beautifully colorful, plasma emission light displays in the Earth’s sky caused by charged particles contained in solar wind from the sun exciting atmospheric molecules. It can also foreshadow an imminent thunderstorm or tornado, the green color arising from optical scattering and transmission effects of light interacting with water droplets and ice particles in the troubled sky. In this article, I present some recent blue-sky science for making our skies green through the vision of a net-zero aviation.

Getting to net-zero airline travel, with a projected 10 billion passenger flights by 2050, is the lofty goal of the emerging eco-friendly aviation industry. Only a few green energy technology options are available to eliminate the 2.5% of global CO2 emissions produced by conventional aviation fuels, to revolutionize flight. The two most likely are hydrogen and sustainable fuels.

The lithium-ion battery is not considered a serious contender for this role because of its very low gravimetric energy density compared to hydrogen, where hydrogen itself is triple that of conventional aviation fuel. The high battery weight to power ratio only works for very small passenger planes, which are under active development by several companies.

Hydrogen offers the potential to fuel larger planes. Inconveniently, its low volumetric energy density means it must be compressed or cryogenically liquified to gain the gravimetric energy density advantage. Moreover, the hydrogen must be safely stored in strong heavy tanks on the plane to feed a hydrogen fuel cell or a hydrogen combustion engine to power the aircraft. Hydrogen will also require new transportation, storage, and distribution infrastructure linking production facilities, airports, and planes.

To store the same amount of energy, the hydrogen storage tanks will have to be about three times larger than those needed for sustainable aviation fuel. The added storage space needed for hydrogen will mean either larger planes or smaller payloads. Larger planes need to carry more fuel to compensate for energy losses arising from the extra frictional drag. Smaller payloads translate into higher travel costs.

Hydrogen-fueled net zero aviation requires hydrogen produced water electrolysis using renewable electricity. Electrolysis currently represents around one percent of current hydrogen production. It is about four times as expensive as the dominant technology; steam reformation of fossil methane. Although some firms, including Hydro-Québec and Eni, are building electrolysis plants, reducing the cost, and building sufficient production capacity to meet all H2 demands is expected to take a least decade or two.

Sustainable fuels for aviation include biofuels and synthetic fuels made from CO2. Biofuels are produced by chemical treatment of agricultural residues and various kinds of waste. Synthetic fuels are made in a two-step renewable energy driven process involving catalytic hydrogenation of carbon dioxide to syngas followed by syngas to hydrocarbons. Besides their energy density advantages, sustainable aviation fuels can be easily integrated into existing conventional aviation fuel infrastructure systems at airports.

Several firms, including Neste, Gevo, and Velocys, already supply biofuels to airlines. Existing plants are located mainly in Europe and the USA, but capacity is growing quickly and expanding to other regions including Asia. The biomass sources vary by location. It is doubtful that a sufficient supply of sustainable biomass is available to meet the projected global aviation fuel requirements.

The need for electricity can be completely avoided by the solar thermochemical splitting of water and carbon dioxide to form syngas using a metal oxide redox cycle, followed by the processing of syngas to liquid hydrocarbon fuels such as kerosene, figure 1. This thermochemical cycle is driven by concentrated solar energy and was demonstrated by the SUN-to-LIQUID project at the solar tower of IMDEA Energy in Spain, figure 2 (left). Solar concentration technologies, such as solar towers and dishes, are commercially available to convert the energy of the sun into high-temperature heat, which is subsequently transformed into stored chemical energy for an eco-friendly fuel synthesis. But the solar thermochemical production of aviation fuel is nascent with only a few small producers such as Synhelion currently active, figure 2 (right).

The challenge for net-zero aviation, will be the need to scale the production of sustainable aviation fuels to handle the estimated annual demand of 500 M tonnes by 2050. While hydrogen and sustainable fuels are the main contenders, the latter has several advantages over hydrogen. Several companies are already supplying biofuels for aviation fuel, but the supply of sustainable biomass may limit the scale of this option.

The race is on to scale down the cost of sustainable aviation fuel production technologies and scale up production capacity. The goal is to disrupt our dependence on cheaper and more plentiful fossil fuel and hasten the energy transition to net-zero and make our skies green again.

DeepMind solves 50-year-old challenge in predicting protein folding
Lola Eniola-Adefeso: “When you feel you belong, everything becomes easy to tackle”
Perpetual loneliness linked to a lack of trust
Genetic testing could help identify underlying cause of SIDS