Two Swiss start-up companies have developed a process to generate aviation fuel from thin air in order to accelerate the industrialization of sustainable aviation fuels. 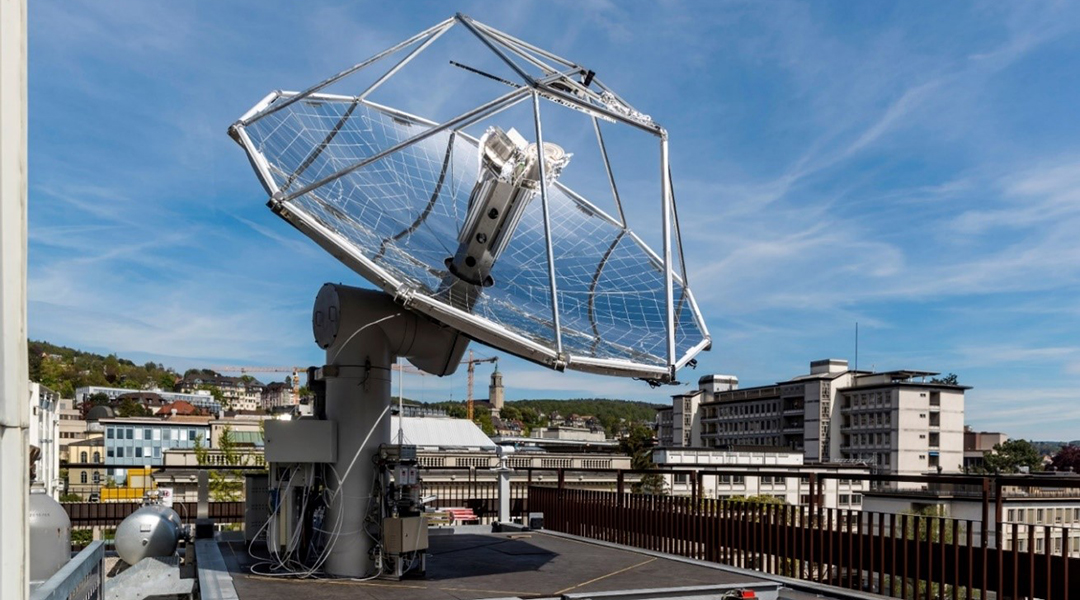 I recently showcased the technology of an innovative start-up company, Air Co, who have established a distillery in Brooklyn, New York that manufactures vodka from thin air. At the heart of their technology is a heterogeneous catalyst that efficiently hydrogenates CO2 to pure ethanol, from which Air Co makes “Green Vodka”, which is beginning to stock the shelves of liquor stores and fill the liquor glasses in eco-friendly restaurants in New York.

In a similar vein, this article highlights a significant and exciting accomplishment of two Swiss start-up companies, Climeworks and Synhelion, that have developed a process to generate aviation fuel from thin air using solar thermochemical technology established at the ETH Swiss Federal Institute of Technology Zurich. These companies have recently partnered with the Lufthansa Group to accelerate the industrialization of sustainable aviation fuels into the market place.

This breakthrough is an incredibly positive development in the battle against climate change because the most difficult fossil fuel to decarbonize is aviation fuel. Emissions from aircraft are estimated to contribute around 3% of the global carbon dioxide load, and by 2050, based on the projected growth of passenger air travel and freight, could triple.

To amplify briefly on the science, recall in the field of solar energy conversion that four major technologies exist for converting the irradiance of the sun into thermal, electrical, and chemical energy. The figure illustrates examples of large-scale, real or envisioned, solar energy conversion technologies. They include solar furnaces to make heat, electricity and fuels, solar panels to produce electricity to power homes, buildings and industrial processes, and photocatalysts, electrocatalysts, and biocatalysts to produce hydrogen, chemicals, and biochemicals.

These solar-driven technologies depend on engineered materials, chemical reactors, processes, and devices to effect the conversion of light to thermal, electrical, and chemical energy with as high an efficiency, as long an operating lifetime, and at as low a cost and environmental burden as possible. In all cases, collecting and utilizing as much of the incident light as possible is pivotal for achieving high photonic efficiency, while optimizing input light to output thermal, electrical, and chemical energy is a prerequisite for realizing high energy efficiency.

There are however always losses in every energy generation, conversion, storage, distribution and transmission system and therefore, at all times, there is always room for continuous improvement for the eventual industrialization of solar powered processes.

The solar thermal process for making jet fuel is based on the unique structural, thermal, and chemical properties of stoichiometric metal oxides to undergo a two-step reduction-oxidation (redox) cycle, as illustrated in the figure. When subjected to very high temperatures, the metal oxide MxOy loses lattice oxygen to create non-stoichiometric metal oxide MxOy-d containing oxygen vacancies. This first reduction step is endothermic and is driven by concentrated solar process heat.  At lower temperatures in the presence of oxygen, this reaction is reversible. This second oxidation step is exothermic and enables the extraction of the oxygen from H2O and CO2 to make synthesis gas — a desired mixture of H2 and CO. Synthesis gas is a valuable feedstock in the chemical and petrochemical industries for making a wide range of commodity organic chemicals, exemplified by liquid hydrocarbons fuels, alcohols, olefins and ethers.

An illustration of a solar thermochemical reactor that can enable this kind of two-step-two-temperature thermochemical redox cycle is shown in the Figure. It consists of a cavity-receiver with a windowed aperture for the access of concentrated solar radiation, and contains a reticulated porous ceramic (RPC) structure made of CeO2 that serves as the redox metal oxide. Fabrication of the RPC is achieved by replicating the structure of a commercial polymer foam with a slurry of CeO2 particles followed by calcining the composite in air to remove the polymer and consolidating the CeO2 replica.

In a pilot plant demonstration of the EU-project Sun-to-Liquid, this kind of solar thermochemical process has been successfully scaled to a solar tower in Madrid, leading to the first-ever production facility for making synthetic kerosene from H2O and CO2 using concentrated solar energy.To close the carbon cycle, direct air capture was integrated into the solar fuel production system in a mini-refinery mounted on the roof of ETH Zurich, which performed the entire process chain for the thermochemical production of methanol from sunlight and air (depicted in the figure). This technological demonstration, under realistic solar field conditions, represents a crucial milestone towards the production of carbon-neutral synthetic hydrocarbon fuels. Their combustion releases an amount of CO2 equivalent to that previously extracted from the air for their production, thereby enabling sustainable long-haul aviation and maritime shipping which will be strongly dependent on drop-in fuels in the foreseeable future.

It has been envisioned that solar thermochemical refineries scaled to 30% the size of the Mojave Desert in California could satisfy the jet fuel requirements of the entire global aviation industry.

This pioneering development is at the foundation of the partnership of the two ETH spinoffs Climeworks and Synhelion with Lufthansa who are working to commercialize and implement the technologies at an industrial scale for direct air capture and solar fuels production.

It is noteworthy that the development of solar thermochemical materials, reactors, and processes is expanding rapidly. They have enabled solar-driven reduction of metal oxides, steam, and dry reforming of natural gas, gasification of carbonaceous materials to synthesis gas, cracking of hydrocarbons, recycling of solid waste, production of ammonia, cement and many other energy-intensive materials. Technology of this kind is providing many opportunities for efficient solar thermochemical production of sustainable commodity chemicals and fuels. A bonus of the thermal approach is that high-temperature heat can be stored in an energy-efficient and cost-effective manner, enabling round-the-clock continuous operation as opposed to other solar driven technologies like photovoltaics.

It seems that Air Co, Climeworks, and Synhelion are all flying high on CO2!