Could silicene be the future of electronics?

The next generation of computing could be performed with silicene, an atomically thin form of silicon which could revolutionize electronics. 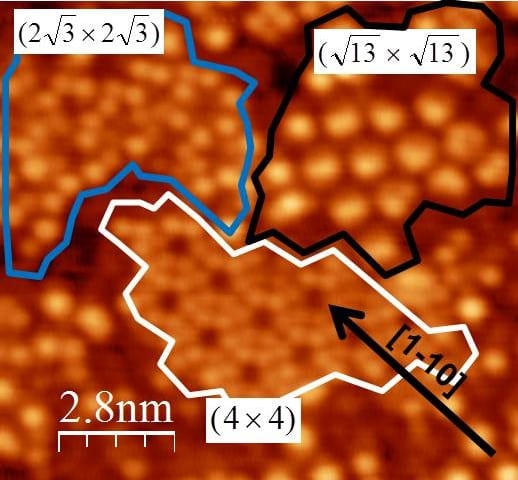 The current standard in computer architecture is based upon silicon technology, which is what allows you to read this webpage, for instance, and its revolutionary influence during the digital age now leaves almost no corner of modern life untouched.  In order to meet our increasing demands for more memory and for higher speed, the dimensions of the silicon-based devices which make up our computers continue to get smaller.  As we begin to reach the limits of the current form of this technology, the question is what is next?  According to recent work by Alessandro Molle and co-workers, the next generation of computing could be performed with silicene, an atomically thin form of silicon which has the potential to revolutionize nanoelectronics.

STM image of the various surface domains of silicene (click to enlarge).

The silicene structure consists of one atomic layer of silicon atoms and in this way it is analogous to graphene, the atomically thin sheet of carbon atoms which has been the subject of high research interest in recent years.  For all of graphene’s promise, one of its limitations is the lack of a naturally occurring band gap in its electronic states.  This band gap is of fundamental importance for creating the electronic switches and logic circuits which make up digital electronic devices.  There has been some recent progress in inducing a band gap into graphene, but it involves complicated methods such as bringing the graphene sheets into contact with a strongly-interacting substrate, which can sufficiently perturb the electronic properties.  Alternatively, silicene exhibits a band gap even without modification and, it has the advantage of inherent compatibility with the silicon technology infrastructure already used in manufacturing much of today’s digital electronics.

In Molle’s studies, his team grew thin layers of silicene on silver substrates using molecular beam epitaxy.  Using scanning tunneling microscopy, various domains of silicene were observed, showing drastically different surface symmetries as illustrated in the accompanying image above.  Using tunneling spectroscopy, the researchers were able to show that the buckled structures, where the strict 2-dimensional symmetry was broken, exhibited qualitatively different electronic properties than the non-buckled phases.  Understanding the details of these structure-property relationships is very important for controlling the electrical properties of the silicene thin films, and with further study, the emergence of the different silicene structures could be controlled by tailoring the growth conditions.  Once these issues have been overcome, the next generation of computers may still be made of silicon after all – only thinner.