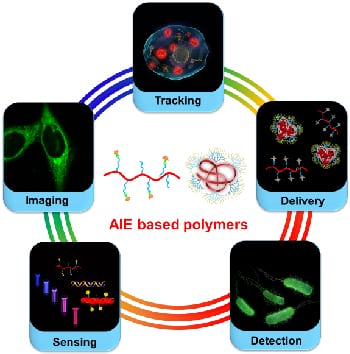 For a long time, fluorescence imaging was dominated by the use of traditional organic fluorophores and fluorescent proteins. But while fluorescent proteins can easily undergo photobleaching, traditional organic fluorophores are susceptible to aggregation caused quenching (ACQ). This ACQ effect occurs when the fluorescent molecules are at high concentrations or in a condensed state, and is undesirable for biomedical applications or electronic devices; especially since many organic dyes naturally aggregate in aqueous media or in films.

Aggregation induced emission (AIE) is a phenomenon wherein propeller-shaped molecules show enhanced fluorescence in the aggregated state, which is in contrast to the infamous ACQ phenomenon. Incorporation of this phenomenon into polymer design has yielded various polymers with AIE characteristics. In recent years, significant progress has been made in the development of AIE polymers, as well as in the exploration of their application in sensing and bio-imaging.

A review by Bin Liu and co-workers highlights recently developed AIE polymer systems, the application oriented synthetic strategy adopted to generate the AIE polymers and their structures. The advanced performance of AIE polymers in bio-applications, such as in vitro and in vivo imaging, fluorescent sensors, stimuli-responsive reporters, as well as drug and gene delivery carriers are illustrated. The exponential progress in developing AIE polymers and an increasing number of their prospective applications has demonstrated that this field presents great research potential.