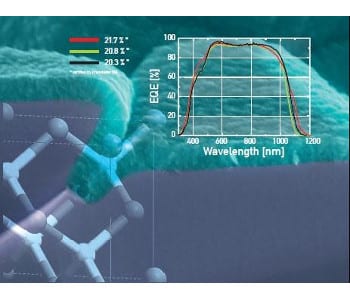 Thin-film solar cells used to advertise themselves with the prospect of significantly reduced production costs at somewhat reduced conversion efficiency. In the past few years, however, the most promising thin-film solar technology, Cu(In,Ga)Se2 (CIGS), has pushed maximum efficiencies further and further beyond the 20% barrier. Most recently the Zentrum für Sonnenenergie- und Wasserstoff-Forschung (ZSW) Baden-Württemberg in Stuttgart, Germany, has been able to make a significant advance towards higher efficiency by presenting CIGS solar cells with conversion efficiencies up to 21.7%.

With this latest development, CIGS thin-film solar cells now additionally can promise not only reduced production costs but also high efficiencies. By presenting the properties of such high-efficiency CIGS devices, a better understanding of the still unexploited potential of this promising technology is to be gained. Consequently, the article in pss (RRL) solar comes to the conclusion that, in fact, we will see a further development of CIGS solar cell efficiencies even beyond the current record values in the not too distant future.