A carbon-dot nanosystem is developed for photodynamic therapy, which releases a photosensitizer bioprecursor in cancer cells upon irradiation. 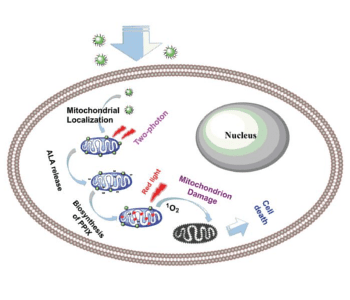 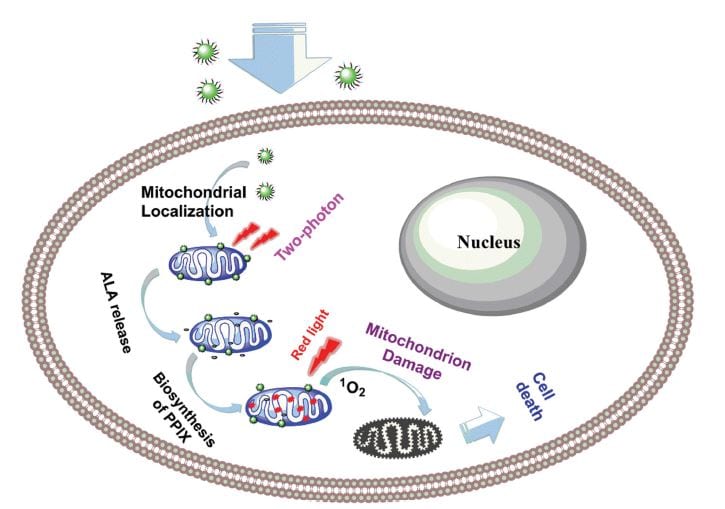 Photodynamic therapy (PDT) is a minimally invasive treatment for several cancer types. Cell death is induced via generation of reactive oxygen species, such as singlet oxygen or superoxide anion radicals by irradiating a photosensitizer molecule. With their nanosystem, Shuizhu Wu, Jianrong Qiu, and co-workers generate photosensitizer in mitochondria by releasing 5-aminolevulinic acid (5-ALA), which is metabolized to PPIX.

The developed nanosystem consists of a carbon nanodot, which serves as carrier for the mitochondria-targeting cation triphenylphosphonium (TPP) and the bioprecursor 5-ALA linked to coumarin. Coumarin can release 5-ALA upon two-photon irradiation at 800 nm. TPP is efficiently taken up by cells and accumulated in close proximity to mitochondria, which leads to the formation of PPIX in these cell compartments. 5-ALA’s low cell penetration ability and low stability in biological fluids are overcome by this approach. Additionally, the release of 5-ALA is spatially controlled by irradiation and, thus, can be induced selectively. The authors propose that their system can be exploited to develop photodynamic-therapy-related applications.