Cancer treatment based on PLGA microparticles 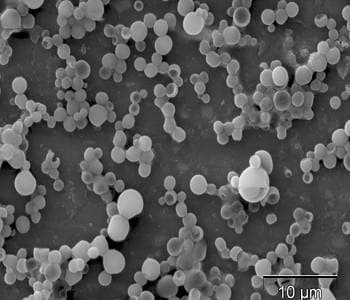 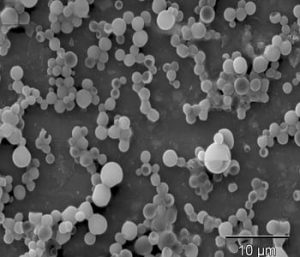 Researchers have developed a cancer imaging and therapy agent composed of PLGA microparticles, which are biocompatible, biodegradable, and FDA-approved, encapsulating a perfluorocarbon liquid core. The agent is administered intravenously, and travels throughout the bloodstream to the target tissue. When the tissue is illuminated with laser light, the liquid is converted to a gas. This rapid expansion kills nearby tumor cells yet minimizes damage to healthy tissue with proper laser targeting.

The activation process of this anti-cancer treatment can be observed using standard clinical ultrasound imaging instrumentation. The group’s proof of principle measurements showed a 30% reduction in the tumor growth rate compared to untreated tumors. They are currently developing a version that incorporates a chemotherapy payload, so that upon illumination with the laser, the drug will be released directly into the tumor, further increasing the cancer therapy effect and avoiding the long standing side effects of traditional chemotherapy treatment.

Changing gluten intake found to have no impact on gut inflammation in healthy individuals
Ultrasound therapy improves the memory of Alzheimer's patients
Does the dusk of “old-school antibiotics” mean the dawn of antimicrobial nanomaterials?
Making progress with a gene therapy for muscular dystrophy