Can art help us understand our own brain?

The exhibition Brain(s) uses artistic installations to explore unanswered questions and the relationship between science and culture. 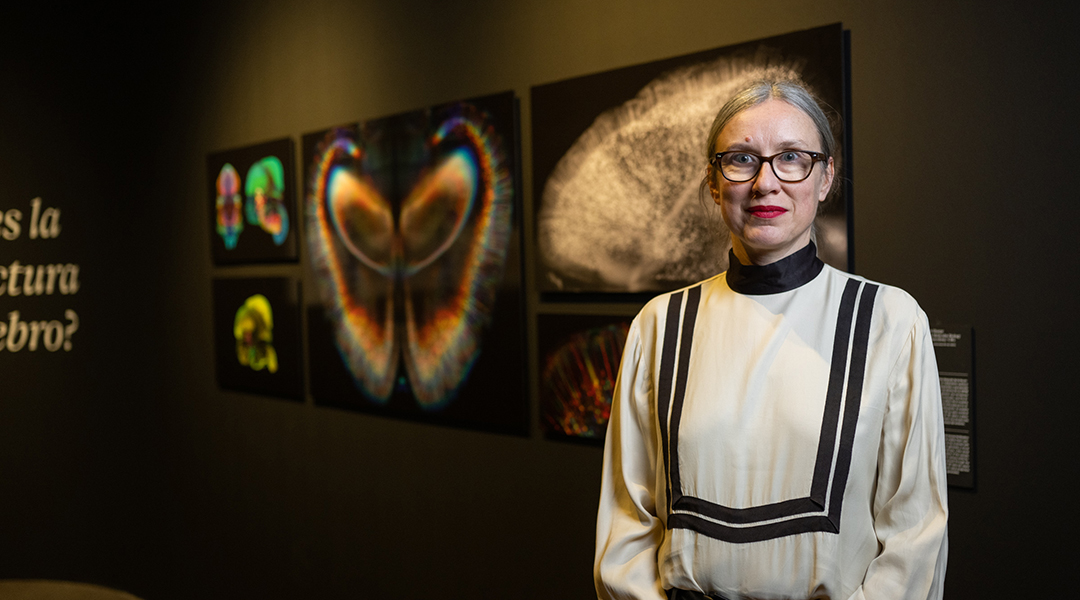 When artist Emily Sargent and physicist and biologist Ricard Solé started putting together an exhibition about the brain, they faced an important challenge: humanity is far from understanding the brain in its entirety.

And yet, who hasn’t asked themselves whether artificial intelligence is really “intelligent” or why it is we became conscious. “Even if you can’t define it […] you’re an expert in the act of being conscious,” said Sargent, senior curator at the Wellcome Collection in London and co-curator, together with Solé, of the exhibition Brain(s).

Sargent and Solé seized the opportunity to create a space to invite the public to ask themselves “honest questions,” said Solé, who is an ICREA professor at the Pompeu Fabra University in Barcelona. “For most of them we don’t know the answers.”

Neuroscience research is extremely fast paced. So much so that, since Sargent hosted the last two exhibitions about the brain at the Wellcome Collection, one in 2012 and another in 2016, the subject became “almost unrecognizable,” she said.

The exhibition invites the visitor to write down their earliest autobiographical memory and thus participate directly in understanding how the self emerges while becoming aware of the fragility of those memories — do you really remember it or did you piece it together it from others’ telling you about it?

Next, a video is shown about a woman who recovered from a coma at age 40 and became unable to remember whom her husband or her four kids were. “It doesn’t explicitly pose the question, but you ask, ‘How do I reconstruct memory and affection?’” explained Solé.

How to create art from science

These are two examples of why the curators assigned an important role to art in conveying some scientific aspects about the brain. However, while art was a key ingredient, it is also a totally different language from science, and bridging that gap was not always easy.

Solé worked with artist Alex Guevara to create a piece about sleeping and dreams. The artist recorded the electric signals produced by his own brain while asleep, which was a fairly impractical task to embark on given that it involved placing electrodes all over his head.

But interpreting the results to create a work of art was even harder. “We did it from a position of mutual respect. Even if people think that I’m the one who knows about the neuroscience, making the artistic piece was not trivial. It was a beautiful dialogue and I hope to do it again in the future,” said Solé.

This dialogue is, perhaps, what enabled the curators to venture into the land of myths. They explicitly address whether or not a man’s brain is different from a woman’s, whether bumps on the skull can predict any mental traits as phrenology advocated, or whether there is a soul outside of the brain.

Science is part of culture

The lessons learnt by engaging with these topics go way beyond the brain itself, argued Solé.“Nazis used phrenology as part of their eugenics discourse – it was false, but it’s a good way to remember that measuring things and doing statistics doesn’t necessarily have anything to do with science. If you add ideology, all bets are off.”

The existence of the soul is, as Sargent remarked, “a really intuitive position to fall into, it’s compatible with many major religions, and that can be deeply challenging [to question]”.

Works by Descartes, one of its major proponents, are shown in the exhibition to illustrate how difficult it was for him to find an alternative position, together with later research whose conclusions were incompatible with the existence of an external soul.

This allowed the curators focused on the “sense of the journey […] these are the paths we took; this is the time it took, these are the evolutions and the experiments we made in trying to understand something,” Sargent said.

With this approach, the curators aimed to present “science as a part of culture rather than separate from,” Sargent suggested, in a poignant metaphor of the culture-led evolution of the brain itself.

Where will AI take us?

Technology is certainly part of that culture, as recent developments in AI remind us. Artist Joan Fontcuberta developed a piece in which he trained an AI with paintings from the Prado Museum in Madrid to produce its own works. From a distance, they resemble the originals. But human features like noses, eyes or ears are significantly distorted.

Solé recalls that 15 years ago, he would never have guessed that AI would be able to imitate the style of a painter or a musician. But, for Sargent, this work “shows us what [AI] is capable of and also what it’s not capable of. That to me is really important,” said Sargent.

Perhaps the true potential for AI is as a tool to help people with brain injuries communicate, as the first tweet written without access to a keyboard, also displayed in the exhibition, demonstrates.

But, for creativity, “the human mind is always going to be ahead, that’s for sure. There won’t be an artificial system, at least not in the next few decades, that replaces scientific or artistic creativity – true creativity. Although you never know whether it’s too early to tell,” Solé reflected.