A new nanodevice has been developed, intended to reproduce the behaviour of a human synapse. 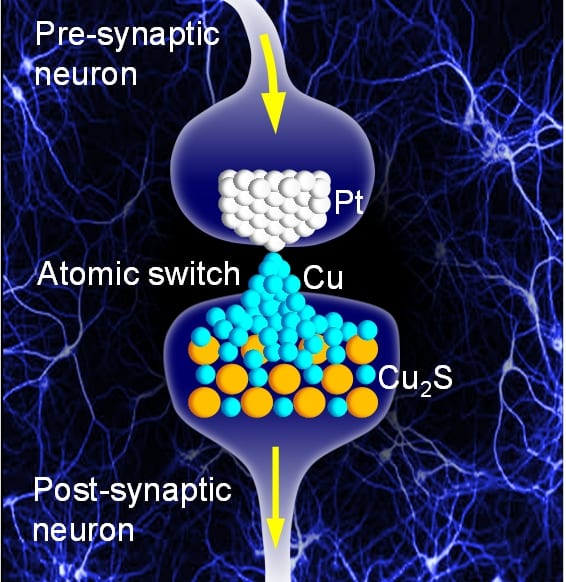 The synapse is the basic unit of neural communication. Representing a synapse by a single device is a challenging task that lies at the intersection of neuroscience and artificial intelligence. The structure of a biological synapse is very complex, with hundreds of proteins and other chemicals interacting in a complicated manner; nevertheless, there is always a gap (synaptic cleft) across which a signal is transmitted.

Now, new research seeks to reproduce a synapse using a single solid-state electrochemical nanodevice called a Cu2S-gap type atomic switch. In this device, there is a gap which is bridged by a copper filament under a voltage pulse stimulation. This causes a change in conductance which is time-dependent. The change in conductance can be considered to be analogous to the change in strength of a biological synaptic connection.

Therefore, this device can be considered to mimic the major features of the human memory; namely, the sensory, short-term, and long-term memories.   In addition, the fact that it responses to the presence of air and the change in temperature enables it to be distinguished as an advanced synthetic synapse with the potential to perceive environment, just like the human brain.

Researchers ask: Should the pharmaceutical industry be nationalized?
Protein-Protected Metal Nanoclusters That Behave Like Natural Enzymes
A biochip with organ-specific tissue models for advanced drug screening
Protein Biohybrids as a Toolkit for New Materials