Two scientists have received a grant from the Research Corporation for Science Advancement to devise a new method for gleaning hydrogen fuel from water. 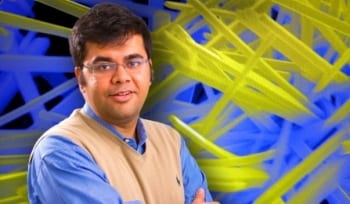 Sarbajit Banerjee, co-director of UB’s New York State Center of Excellence in Materials Informatics, is one of two UB researchers working on the alternative energy project.

Two University at Buffalo faculty members have received a $200,000 Scialog grant from the Research Corporation for Science Advancement to devise a new method for gleaning hydrogen fuel from water.

Their idea is to use nanomaterials with interesting electrical properties to build tiny solar devices that will harness energy from the sun to split water into hydrogen and oxygen.

Sarbajit Banerjee and David Watson, both associate professors of chemistry, will be working with UB students on the project.

Their devices will consist of the following parts:

The scientists will be testing various quantum dots to see what combinations of materials produce the best results.

“We are trying to come up with a kit of nanoscale components that we can mix and match to harvest the energy of the sun to split water into solar fuels,” said Banerjee, co-director of UB’s New York State Center of Excellence in Materials Informatics.

Here’s how their fuel production system will work: When sunlight strikes the quantum dots, the energy will knock loose a single electron, creating what scientists call a “hole” — the absence of an electron. This hole will travel down the vanadium oxide nanowire and into a catalyst, where the hole will drive one of two chemical reactions needed for splitting water. The second critical reaction takes place elsewhere, using up the electrons that were knocked out of the quantum dots at the start of the process.

The system the scientists envision will be self-refreshing: Each time a hole moves down the vanadium oxide nanowire, an electron will replenish the hole in the quantum dot, which will be primed to begin another cycle upon being excited with sunlight, thereby perpetuating the conversion of light to chemical energy.

The beauty of this is that the only ingredients ever fully consumed will be water and sunlight, Watson said.

“Sustainable energy technologies are urgently needed,” Watson said. “Through our basic science, we aim to uncover new methods for splitting water, which is the ultimate challenge in solar energy research.”

The Research Corporation for Science Advancement (RCSA) is one of the oldest foundations in the United States. It is dedicated to funding the high-risk/potentially high-reward investigations of early-career scientists.

The RCSA’s Scialog program, which is funding Banerjee and Watson’s research, supports highly innovative, untested ideas with the potential for high impact on challenges of great global significance. Scialog is formed from the words “science” and “dialog.” The program requires Scialog fellows to attend annual meetings where they are encouraged to discuss their most innovative and speculative ideas in a supportive environment.

“Scialog is an experiment in accelerating the pace of breakthrough scientific discoveries,” said Jack Pladziewicz, RCSA’s interim president. “Creative researchers like Banerjee and Watson represent the world’s best hope for a brighter tomorrow. RCSA is proud to support them.”