In a proof-of-concept study, authors in Italy have demonstrated electric field-controlled switching between stable states in a porous material containing nematic liquid crystals. 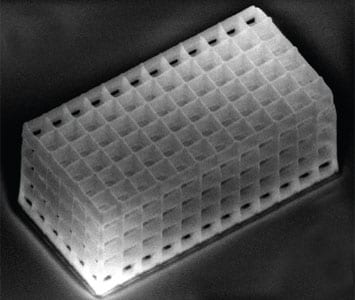 When the electric field is applied above a certain threshold value, a topological change is effected which switches the bright material to a ‘dark’ state. The threshold value is dependent on the thickness of the cell structure, and the new state is maintained after the field is turned off, an effect shown in computer simulations, denoted ‘memory from topology’.

This bistability is achieved by confining the LCs within a bicontinuous, solid, porous matrix – in this case, a commercially available organic–inorganic photoresist – which is used to generate a cubic scaffold via two-photon laser polymerization, sandwiched between layers of ITO-coated glass.

The stability of the two states after removal of the electric field is critical to the application of these composites to materials such as electronic paper and other display devices where two distinct, stable states are required. In addition, the composites created in this work have a comparable ‘pixel’ size and response time to currently available mobile display technologies.