Researchers create an artificial chemical sensor based on one of the human body’s most important receptors. 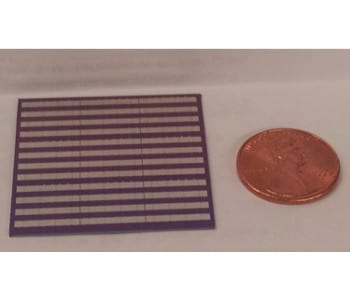 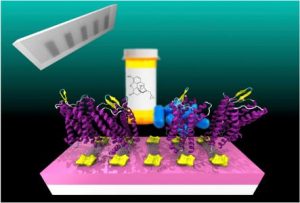 An illustration of the researchers’ device.

Almost every biological process involves sensing the presence of a certain chemical. Finely tuned over millions of years of evolution, the body’s different receptors are shaped to accept certain target chemicals. When they bind, the receptors tell their host cells to produce nerve impulses, regulate metabolism, defend the body against invaders or myriad other actions depending on the cell, receptor and chemical type.

Now, researchers from the University of Pennsylvania have led an effort to create an artificial chemical sensor based on one of the human body’s most important receptors, one that is critical in the action of painkillers and anesthetics. In these devices, the receptors’ activation produces an electrical response rather than a biochemical one, allowing that response to be read out by a computer. 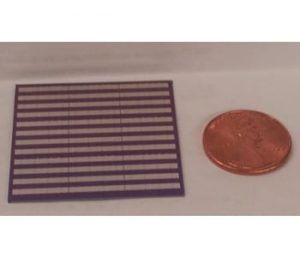 The researchers were able to fit 192 separate graphene-receptor devices on this chip.

By attaching a modified version of this mu-opioid receptor to strips of graphene, they have shown a way to mass produce devices that could be useful in drug development and a variety of diagnostic tests. And because the mu-opioid receptor belongs to the most common class of such chemical sensors, the findings suggest that the same technique could be applied to detect a wide range of biologically relevant chemicals.

The study, published in the journal Nano Letters, was led by A.T. Charlie Johnson, director of Penn’s Nano/Bio Interface Center and professor of physics in Penn’s School of Arts & Sciences; Renyu Liu, assistant professor of anesthesiology in Penn’s Perelman School of Medicine; and Mitchell Lerner, then a graduate student in Johnson’s lab. It was made possible through a collaboration with Jeffery Saven, professor of chemistry in Penn Arts & Sciences. The Penn team also worked with researchers from the Seoul National University in South Korea.

Johnson’s group has extensive experience attaching biological components to nanomaterials for use in chemical detectors. Previous studies have involved wrapping carbon nanotubes with single-stranded DNA to detect odors related to cancer and attaching antibodies to nanotubes to detect the presence of the bacteria associated with Lyme disease.

The groups of Saven and Liu have used computational techniques to redesign the mu-opioid receptor to make it easier to use in research. In its natural state, the receptor is not water soluble, making many common experimental techniques impossible. Worse, proteins like this receptor would normally be grown in genetically engineered bacteria to generate the quantity necessary for extensive study, but parts of the natural mu-opioid receptor are toxic to the E. coli used in this method.

After Saven and Liu addressed these problems with the redesigned receptor, they saw that it might be useful to Johnson, who had previously published a study on attaching a similar receptor protein to carbon nanotubes. In that case, the protein was difficult to grow genetically, and Johnson and his colleagues also needed to include additional biological structures from the receptors’ natural membranes in order to keep them stable.

In contrast, the computationally redesigned protein could be readily grown and attached directly to graphene, opening up the possibility of mass producing biosensor devices that utilize these receptors.

“Due to the challenges associated with isolating these receptors from their membrane environment without losing functionality,” Liu said, “the traditional methods of studying them involved indirectly investigating the interactions between opioid and the receptor via radioactive or fluorescent labeled ligands, for example. This multi-disciplinary effort overcame those difficulties, enabling us to investigate these interactions directly in a cell free system without the need to label any ligands.”

“This is the kind of project that the Penn campus makes possible,” Saven said. “Even with the medical school across the street and the physics department nearby, I don’t think we’d be as close collaborators without the Nano/Bio Interface Center supporting us.”

With Saven and Liu providing a version of the receptor that could stably bind to sheets of graphene, Johnson’s team refined their process of manufacturing those sheets and connecting them to the circuitry necessary to make functional devices.

“We start by growing a piece of graphene that is about six inches wide by 12 inches long,” Johnson said. “That’s a pretty big piece of graphene, but we don’t work with the whole thing at once. Mitchell Lerner, the lead author of the study, came up with a very clever idea to cut down on chemical contamination. We start with a piece that is about an inch square, then separate them into ribbons that are about 50 microns across.

“The nice thing about these ribbons is that we can put them right on top of the rest of the circuitry, and then go on to attach the receptors. This really reduces the potential for contamination, which is important because contamination greatly degrades the electrical properties we measure.”

Because the mechanism by which the device reports on the presence of the target molecule relies only on the receptor’s proximity to the nanostructure when it binds to the target, Johnson’s team could employ the same chemical technique for attaching the antibodies and other receptors used in earlier studies.

Once attached to the ribbons, the opioid receptors would produce changes in the surrounding graphene’s electrical properties whenever they bound to their target. Those changes would then produce electrical signals that would be transmitted to a computer via neighboring electrodes.

The high reliability of the manufacturing process — only one of the 193 devices on the chip failed — enables applications in both clinical diagnostics and further research.

“We can measure each device individually and average the results, which greatly reduces the noise,” said Johnson. “Or you could imagine attaching 10 different kinds of receptors to 20 devices each, all on the same chip, if you wanted to test for multiple chemicals at once.”

In the researchers’ experiment, they tested their devices’ ability to detect the concentration of a single type of molecule. They used naltrexone, a drug used in alcohol and opioid addiction treatment, because it binds to and blocks the natural opioid receptors that produce the narcotic effects patients seek.

“It’s not clear whether the receptors on the devices are as selective as they are in the biological context,” Saven said, “as the ones on your cells can tell the difference between an agonist, like morphine, and an antagonist, like naltrexone, which binds to the receptor but does nothing. By working with the receptor-functionalized graphene devices, however, not only can we make better diagnostic tools, but we can also potentially get a better understanding of how the bimolecular system actually works in the body.”

“Many novel opioids have been developed over the centuries,” Liu said. “However, none of them has achieved potent analgesic effects without notorious side effects, including devastating addiction and respiratory depression. This novel tool could potentially aid the development of new opioids that minimize these side effects.”

Wherever these devices find applications, they are a testament to the potential usefulness of the Nobel-prize winning material they are based on.

“Graphene gives us an advantage,” Johnson said, “in that its uniformity allows us to make 192 devices on a one-inch chip, all at the same time. There are still a number of things we need to work out, but this is definitely a pathway to making these devices in large quantities.”