Biomaterials with bite: A new understanding of the spider’s fang

Prof. Peter Fratzl and co-workers analyzed the structure of spider fangs to gain a better understanding of chitin-based biomaterials. 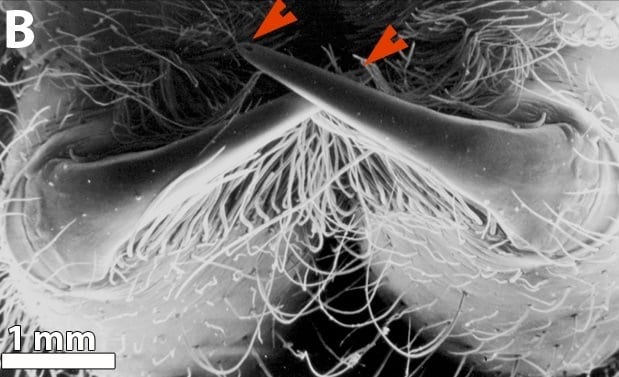 When you are a spider, your fangs are one of your most important assets, both for defense and for capturing prey.  The material properties are key, where the hardness, stiffness, and toughness determine whether the fangs are able to consistently puncture the exoskeletons of the insects which are targeted for food.  It turns out that both the fangs and exoskeletons are made of bio-composite materials, consisting largely of chitin.  At first glance, this appears to be an unfortunate coincidence for spiders, akin to fabricating a butter knife out of butter.  So then how are spiders able to successfully bite and consume their prey?  This may not be a question we ask ourselves often, but the answers have profound implications for our understanding of the nature of biomaterials. 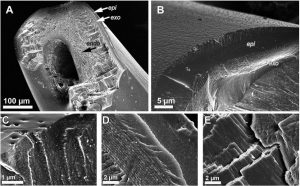 Professor Peter Fratzl and his co-workers set out to answer this question by studying the fangs of the wandering spider to a level of detail that had not yet been achieved until now.  The specific choice of the wandering spider was motivated by the fact that it sustains itself on a steady diet of insects, and therefore regularly needs to pierce the exoskeleton of its prey with its fangs in order to capture its food.  The fangs are 1.5-3 mm long and can be thought of as small injection needles, with a small opening for injecting venom located just behind the tip.  Analysis of the chemical composition of the fangs reveals a composite material consisting of layers of chitin dispersed within a matrix made of various proteins, such as histidine and alanine.  Chitin is biopolymer which bears a chemical resemblance to glucose and is commonly found as a component of the exoskeletons of arthropods.  However, the way that the components are distributed within the biocomposite can have a dramatic effect on the mechanical properties of the material.

The fang itself was found to have a gross structure consisting of the epi-, exo-, and endocuticles, among which, the ratio of protein to chitin varies widely along with the degree of alignment between the chitin layers.  The mechanical properties were also found to vary along the length of the fang, where the tip showed more than twice the hardness value of locations near the base.  Surprisingly, almost no chitin was found in the tip region of fangs, where both the highest hardness and stiffness values were measured.  Instead, high concentrations of Zn and Cl were found in these regions, and it was postulated that Zn ions could play a role in cross-linking of the proteins in order to tune the mechanical properties.  Small Zn-rich particles were also detected near the tip which could potentially be nanoparticles of ZnO, meticulously placed in order to increase hardness and abrasion resistance where it is needed most.  The results of this study show that the structure of the spider’s fang is much more complex than one might initially imagine, and the lessons learned here are important for both the understanding and imitation of some of nature’s most interesting materials.