Bioelectronics and the organic electrochemical transistor 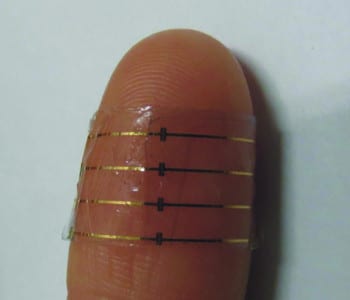 In pop culture, the word “bioelectronics” may conjure up images of science fiction films involving malevolent cyborgs. In reality, this quickly evolving field, encompassing the interface of biology and electronics, is creating many exciting advances. The number of reports on new biomedical devices applied to biochemical sensing, tissue characterization, and organ monitoring is increasing exponentially. Organic electrochemical transistors (OECTs), which can be used as local transducers, have been crucial to these developments. In this context, the Journal of Applied Polymer Science presents a review of OECTs in bioelectronics by Róisín M. Owens and co-workers based at the Center of Microelectronics in Provence. 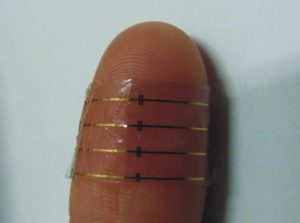 One of the key features of the OECT is its amplification properties in sub-volt operation regimes, preventing electrolysis, and extending operating times necessary for in-vitro and in-vivo applications. The amplification means (as mentioned above) that it can be used as a high fidelity transducer of biological events, providing high sensitivity sensing for a wide spectrum of applications. It is in part because of this that OECT-based devices have the potential to circumvent the limitations of traditional electrochemical sensors for biomedical purposes.

The review discusses the many and varied applications of the OECT, beginning with ion, enzymatic and immuno-sensing, revealing how the OECT can be used for low cost diagnostics. The second half is devoted to coupling OECTs with mammalian cells, both in vitro and in vivo. Here OECTs have been integrated, for example, in a device implanted on the brain to monitor activity in place of standard inflexible electrodes; the signals detected are far superior.

Polymers play an important role in the OECT. Indeed all OECTs reported to date have been fabricated with conducting polymers as the active material in the channel. (The OECT is a three terminal device in a transistor configuration; the source and drain are connected by an organic conducting material in which an electronic current is generated in response to a potential difference.) The main reason for this is the inherent properties of polymers – compatibility with live cells, optical transparency, mechanical flexibility akin to tissue, and both ionic and electronic conductivity. Moreover, conducting polymers can be modified to tailor the properties to meet those required for specific applications. Finally, the intrinsic nature of conducting polymers helps facilitate the ease of fabrication of the OECT itself.

As Owens states, “the field of organic bioelectronics has really gained pace in the last ten years….Of all the device types used, the OECT appears to emerge as a device with huge potential when considered under the critical eye of biologists who have many and exacting requirements, most of important of which are high sensitivity. We felt the time was right to focus a review on biological applications of the OECT to provide readers with a comprehensive overview of what the applications have been so far, why the device is so successful, and what the future directions will be.”

By researching both materials science and cell biology, Owens hopes to fabricate systems that are capable of monitoring 3D tissue constructs, and eventually go on to develop multiple organ ‘body on a chip’ type systems.

The review, entitled “The organic electrochemical transistor for biological applications”, appears in the Journal of Applied Polymer Science Volume 132, Issue 15.