Biobots made from roundworms

Scientists are turning to C. elegans for biobot designs, guiding their movement through reconfigurable microtopographies. 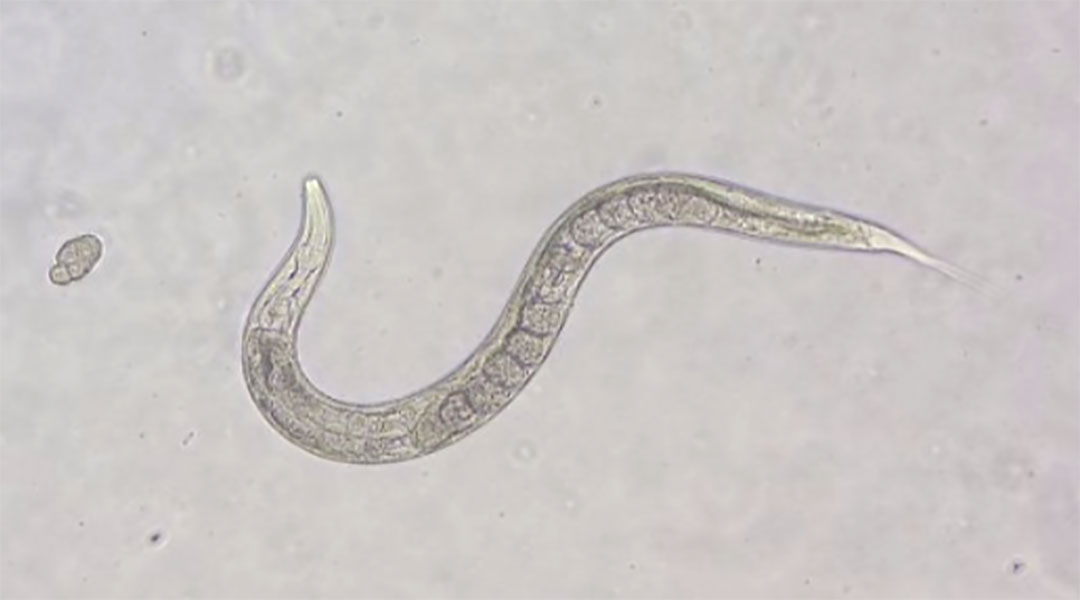 Tiny, automated robots are exploding with potential — they have the unique ability to conduct microscale tasks, such as targeted drug delivery, cell manipulation, perform diagnostic tests, and even, perhaps one day, non-invasive surgery.

In a recent study published in Advanced Science, a team from South Korea are turning to roundworms called Caenorhabditis elegans (C. elegans) for the next generation of biobot designs.

“C. elegans are small animals with an elongated body,” said Jeong Jae Wie, a professor in the Department of Organic and Nano Engineering at Hanyang University, Seoul, and one of the study’s corresponding authors. “They look like a snake or an earthworm reduced to a very small size, ≈1 mm in length at most […] and have genes similar to humans.”

Biobots are not new, and a range of examples exist within the scientific literature, such as a cockroach implanted with an electrical circuit for applications in search and rescue, or cells capable of delivering a drug payload.

While an interesting concept, there is a need for living, miniature biobots that are controlled without battery packs, integrated electrical circuits, or sophisticated software. “Accordingly, we aimed at the development of guiding sub-millimeter-scale biobots through […] environmental changes,” added Wie’s collaborator, Seung Goo Lee of the University of Ulsan.

In their study, the team tracked the slender, sinusoidal movements of C. elegans through a magnetically configured terrain, physically guiding them without the need for chemical or electrical stimuli. “We avoided chemical and electrical stimulations with the animals’ welfare in mind,” said Sun Min Kim from Inha University, and another of the study’s lead authors.

C. elegans have sensory neurons located in their head, body, and tail which help them respond to changes in their environment — the researchers call this their mechanosensing ability. “It is an essential ability among living creatures to protect themselves from danger by sensing the applied stress, strain, substrate rigidity, and adhesiveness of their surrounding environments,” wrote the team.

In a barrier-free environment, the movement of C. elegans is seemingly random, driven by a need to find prey or avoid toxins. In the past, this natural behavior could be modified by first paralyzing the worms’ nerve cells with ivermectin followed by local irradiation of specific muscle cells to instigate crawling in a desired direction.

But in the current study, the team induced movement in the roundworms using micropillar arrays, which act as guiding barriers, made from magnetic particles mixed into an elastomer polymer resin. The resin can change its morphology based on the applied magnetic field and microbarriers were designed with spacings similar in size to the 40–60 μm body of adult C. elegans.

“For physical guidance of biobots using their mechanosensing ability, we needed to design an optimal geometry of the microtopography, such as interbarrier spacings, cross-sectional shape, width, length, and height of microbarriers,” said Wie. “These dimensions — with and without magnetic actuation — should be felt as sort of spatial confinements on the scale of the C. elegans.”

The C. elegans were indeed shown to perceive these changes in the microtopography of the microbarriers, changing their movement to navigate through their environment. Key to their on-demand movements is the regulation of interpillar spacings and pillar height according to magnetic flux density.

“Linear movement was guided by designing the microtopography of the microbarriers such that the spacings between them were similar to body width of C. elegans with no applied magnetic field,” explained Lee. “Subsequently, their ‘circumventing movement’ [to get around barriers in a maze] was induced with a microtopography designed using twisted and paired microbarriers and by applying a high magnetic flux density.”

To get them to climb, the team used twisted and bent microbarriers, representing a stair-like topography, and a high magnetic flux density. Climbing became faster as the height of the microsteps became comparable to the size of the C. elegans‘ heads.

In addition to demonstrating controlled movement in C. elegans, the team also propose using this platform as the basis for improved drug discovery.

Given C. elegans‘ genetic similarity to humans, they have been used extensively as models for studying human disease, especially within the context of sensory neurons. “There are many strains of C. elegans with genetic mutations,” said Kim. “We examined which locomotion was possible despite gene disorders in specific neurons by comparing the head/tail mutant trp-4(sy695) and body mutant mec-4(e1339) with the wild type. By determining locomotion velocity, we identify the effects of neuron disorders on the capacity for locomotion.

“Changes in the locomotion of different worms after treatment with a developing drug can also help inform on its safety. Systematic repetition of this process could also lead to determining the most effective drug for treating different neurological diseases, advancing future drug screening platforms.”

Future research, says the team, will further explore the utility of this platform in drug screening, integrating computational modeling to help elucidate results.

Are biohybrid electronics the future?
Tuning nanoparticle shape and size by genetic engineering of bacteria
Delivering CRISPR gene-editing therapy: What’s holding us back?
Degradable microrobots could help deliver cells within the body