The mechanical cycling of a number of microscale 3D polymer‐based architectures is investigated. 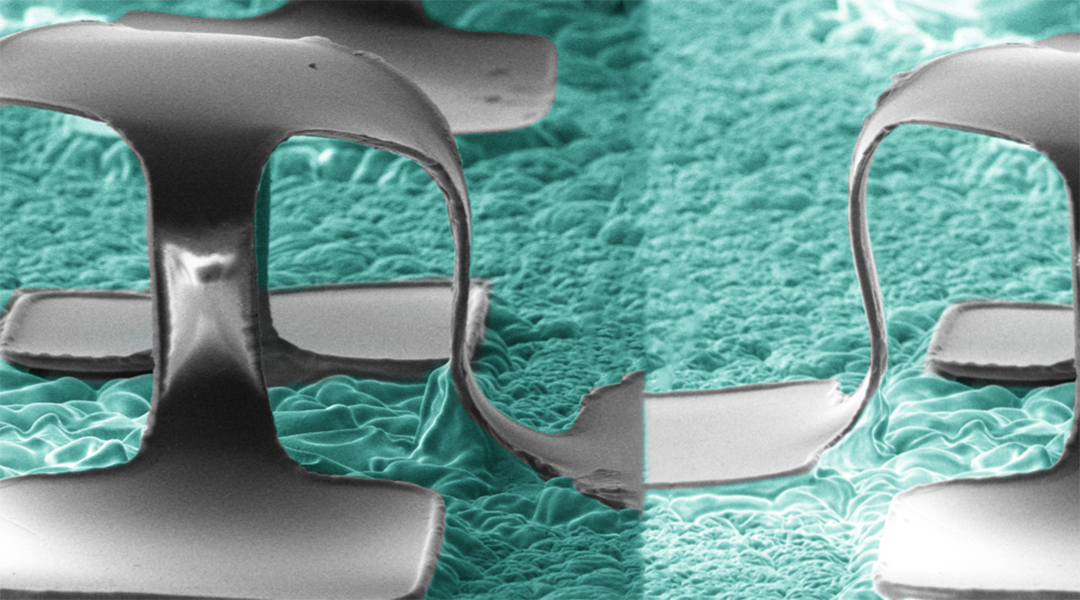 Miniature devices, especially microelectromechanical systems (MEMS) consist of sensors and actuators, and form transducers capable of converting one form of energy to another. The development of MEMS technologies is on the rise and the MEMS market has rapidly grown, surpassing $22 billion in 2018.

The focus for the MEMS community is to solve issues such as reliability, to enable transitioning technologies from the laboratory to practical real-world applications. The operation of MEMS requires a high level of reliability, of which mechanical component reliability is critical, with fatigue representing a major failure mechanism.

Biology involves inherently complex 3D designs. Specifically, thin biostructures composed of membranes such as insects’ wings and plants’ leaves can achieve complex functionalities under vibrations, such as maneuverability and resistance to strong winds.

They do so by changing the shape and curvature of their membranes and ribbons. Achieving such capabilities in advanced materials would have important implications for 3D MEMS sensors and energy harvesting devices.

To successfully integrate bioelectronics with biological systems, devices must adapt to the complex 3D nature of the biological systems. Unlike other electronic devices, MEMS are often designed to move or oscillate, with the mechanical oscillations generating an electrical output.

Thus, such applications experience cyclic deformation during operation. For these reasons, most 3D MEMS sensors require stretchable/flexible electronic devices to sustain repeated complex deformations, imposed by either the substrate (such as the skin) or by external stimuli, with loads up to 30% compression.

The behavior of these 3D structures with repeated deformation is unknown, and no reports exist in the literature on the mechanical cycling of origami or kirigami-inspired structures.

John’s co-worker, Andreas A. Polycarpou from Texas A&M University states that “cycling at 50% of the height of the structure is found to be completely elastic and maintained stable hysteresis during cycling. Therefore, kirigami structures can provide a reliable operation for these 3D MEMS devices. We are excited with these experimental results, and hope this work to pave the way for the development of a new class of 3D flexible MEMS sensors for everyday applications.”