Bacteria-driven microswimmers can release the therapeutic drug specifically at the site of disease by attaching to a certain type of eukaryotic cell. 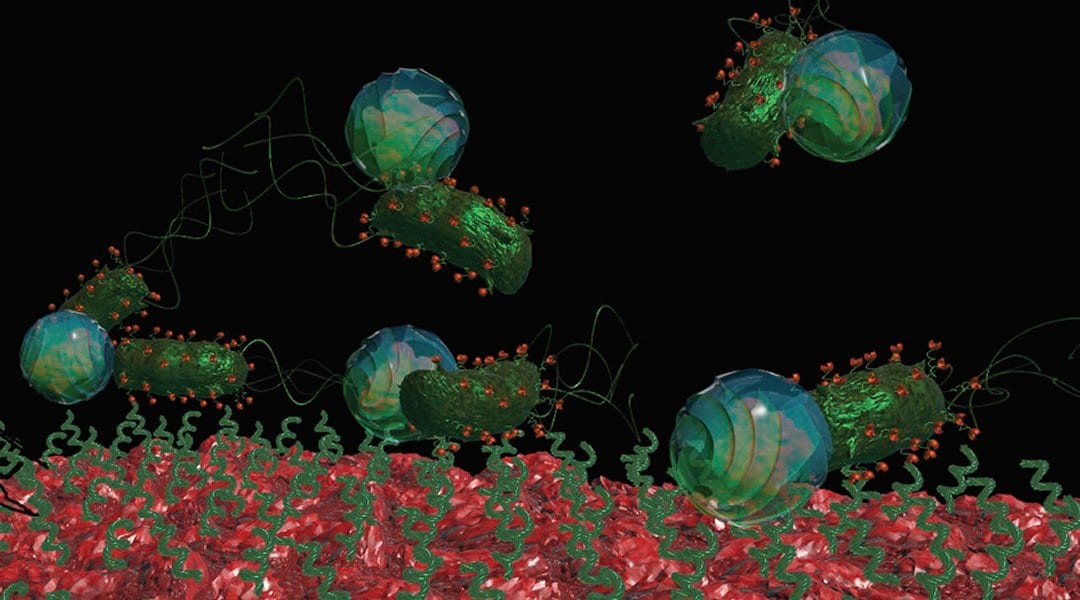 Bacteria are in public generally considered dangerous and the source of different diseases. Since the discovery of bacteria by Antonie van Leeuwenhoek, most efforts have been focused on killing bacterial cells in order to get rid of different infections. The reality, however, most bacterial species do not cause any disease. In contrast, our health is dependent on many types of bacteria: the ones that are living inside our body and forming the microbiota, and the ones making food, drugs, and vaccines, like small factories. We are living in a sort of symbiosis with these small creatures.

100 years ago it was discovered that bacteria can cure tumors. Since then, many researchers tried to use these microorganisms in order to fight tumors and other serious diseases. In the last couple of decades, many bacterial strains which were considered as pathogenic previously, have been examined as cancer fighters, all the way into human clinical trials. Results have been promising, while concerns with respect to the safety remained.

Many types of bacteria can move, owing to their flagellar motors and their movement is not always stochastic. They can sense a number of chemicals, including the ones which are secreted from cancerous cells, and can swim towards them or away from them. It was shown by many researchers that bacteria can find cancerous cells and accumulate inside tumors.

In a recent publication in Advanced Sciences, Metin Sitti and colleagues from the Max-Planck Institute for Intelli 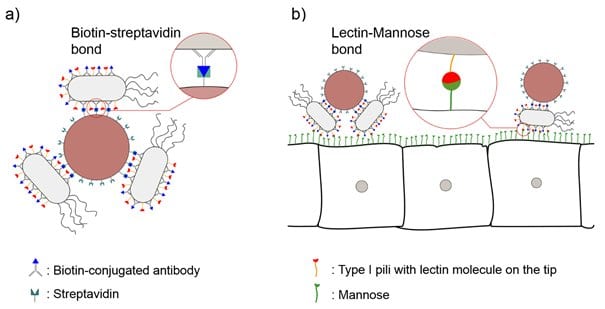 gent Systems, Germany, now report the development of bacterial-driven microswimmers for targeted drug delivery. They attach non-pathogenic Escherichia Coli bacteria to particles which could potentially encapsulate therapeutic drugs. Microscopic investigations showed that the bacteria can propel the particles. But more importantly, the bacteria can attach to certain eukaryotic cells which are expressing mannose on their surface, due to the lectin molecule of the bacterial membrane. Subsequently, the drug carrier also immobilized on the surface of the cells due to the attachment of the bacteria. Considering the potentials of the bacteria to express different molecules on its membrane, Sitti and colleagues argue that the method could be further exploited to develop bacterial microswimmers with the competence of attaching to different types of cells.

In modern medicine, there is a need for smart therapeutic agents. Targeted drug delivery has been developed to enhance the therapeutic efficiency of drugs and reduced their side effects. Now, by emerging new scientific fields such as microrobotics and structural biology, we are entering a new era. Bacteria are not considered dangerous anymore. They can be part of the solution toward smart therapeutic agents.

A New Low-Cost Parasite Diagnostic System Could Benefit Billions
Making MRIs Safer
Sheets of carbon nanotubes come in a rainbow of colors
Could a universal coronavirus vaccine be possible?