Artificial neural networks made from memristors for brain-inspired computing

Artificial neural networks made from domain walls mimic synapses and neurons in the brain for neuromorphic computers. 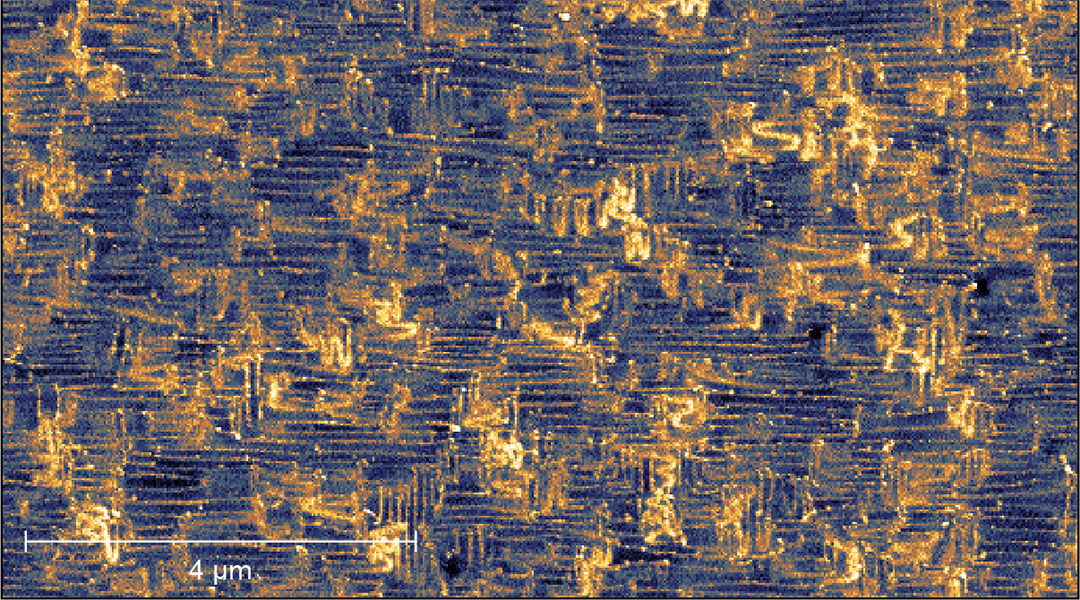 While reading these lines, your brain is efficiently performing image recognition to identify letters and words, matching it with your learned vocabulary to understand the content. Modern computer chips operate in a similar manner, providing a platform for running what are called artificial neural networks.

These are virtual networks made of artificial neurons and synapses, which are trained to process information for specific tasks such as facial recognition to unlock smartphone displays or tumor detection from brain scans. However, compared to the brain, artificial neural networks run on conventional computers are extremely slow and consume large amounts of energy.

Researchers have now made a step towards the creation of a new type of artificial neural network made from a material that hosts electrically conductive structures that resemble a network of synapses and neurons. With these brain-like structures, the material itself could potentially perform cognitive tasks with high efficiency, using them in brain-inspired computing architectures called neuromorphic computing.

How does the brain process information?

Research in neuromorphic computing aims to emulate the architecture and properties of the brain to create a new generation of computers that are as small and frugal as a laptop but as powerful as a supercomputer.

The brain’s impressive capabilities stem from the fact that it works as an in-memory processor, which means that information is processed and stored in the same biological tissue. This is in contrast to conventional computers, where data is transferred back and forth between the memory and the processor, creating bottle necks which slow down performance.

The brain is also plastic, meaning it can change and adapt depending on input from its environment. This occurs through the strengthening and weakening of neuron junctions called synapses. This lends us the ability to learn over time as the synaptic weight or degree of connection between neurons is generally maintained over time even if no new input is present.

Artificial neural networks based on memristors

In a recent paper published in Advanced Intelligent Systems, researchers from the CogniGron center at the University of Groningen used a material that, like the brain, contains a network of nanoscale, electrically conducting channels called memristors.

Memristors are, in principle, very simple electronic devices that combine the functions of memory (“Mem-”) and resistors (“-ristor”). They can be seen as variable resistors, whose resistance depends on the charge which has flown through them in the past, providing them with this memory.

“They are extremely interesting for next-generation computer research, as they might combine data processing and storage using the same device,” said Jan Rieck, the leading author of the paper. “Compared to classical transistors, which require three electronic terminals, memristors are two-terminal devices, giving us the potential to simplify electronic circuits tremendously, while gaining new functionalities at the same time.”

How can a material emulate the brain?

The researchers chose a material called a ferroelectric, which is made of numerous tiny dipoles — simple pairs of positive and negative electrical charges separated by distances of a few atoms. To emulate synaptic behavior, the researchers made use of a phenomenon typically found in ferroelectrics.

During the production of the material, it forms microscopically small regions in which all dipoles are always aligned in the same direction—these regions are called domains. “The border regions, in which the dipoles change their orientation are called domain walls and they come with a unique property: they conduct electricity much better than the rest of the material, even though ferroelectrics are typically insulators,” explained Rieck.

However, domain walls are more than only rigid resistors. “If we clamp a single domain wall at both ends and apply a voltage, we send an electrical current through it, which can increase or decrease the domain wall resistance. That basically makes domain walls memristors,” said Rieck.

They even exhibit analog resistance tunability, allowing to access a continuum of resistance values similar to the analog continuum of synaptic weight in the brain’s synapses.

Typically, domain walls are just one or two atoms wide and self-assemble during the fabrication of ferroelectric thin films. “In fact, these thin films host nanoscale networks of domain walls,” added Rieck. “If such a nanoscale network of conducting and memristive domain walls is well interconnected, it could be seen as a first step towards a neuromorphic computing hardware, showing us properties like high connectivity, reconfigurability, and co-localization of memory and information processing.”

A network of domain walls

A network of nanoscale domain walls was created by the researchers while growing thin films of bismuth ferrite (BiFeO3) that are tens of nanometers thick — a thousand times thinner than a human hair. The BiFeO3 film was grown using a technique called pulsed laser deposition (PLD), in which an intense pulsed laser beam is focused on a target of the desired material in ultra-high vacuum.

“In this way, the material is locally vaporized and condenses on a heated substrate, on which it forms a thin film,” explained Rieck. “While PLD is a popular technique for crystalline thin film growth, the deposition of high quality BiFeO3 thin films is very challenging, due to the high volatility of bismuth. But after extensively tuning the PLD process parameters, we finally achieved optimum growth conditions.”

After deposition, the thin film surface was probed using an extremely sharp tip measuring 40 nm in diameter. This technique is called scanning probe microscopy and allows scientists to illustrate the domain wall network structure in a conduction map. “Our conduction maps confirm exactly what we were looking for: the BiFeO3 thin film exhibits a well-interconnected and conductive nanoscale domain wall network, which shows higher currents than the rest of the material,” said Rieck.

Through carefully designing the scanning probe microscopy experiments, the researchers showed that the measured current flows laterally in the plane of the BiFeO3 thin film along numerous conduction paths consisting of many connected domain walls. This has not been done in such a network in any ferroelectric material before.

By placing the tip at specific domain wall locations and applying an alternating voltage signal, the researchers confirmed memristive properties and potential tunability of the domain wall network, bringing them closer to the nature of the brain and better artificial neural networks. “This work is an important prerequisite to further exploration of the potential of domain wall networks in oxide thin films for memory and neuromorphic applications,” Rieck concluded.