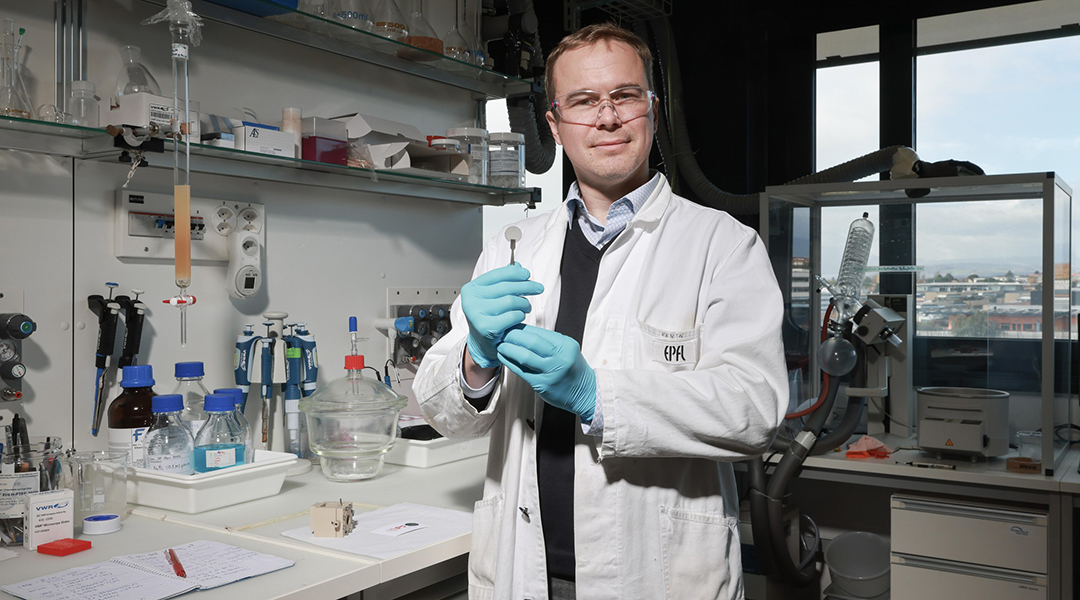 It sounds too good to be true: a device that uses energy from the sun to harvest water from the air that can then be used to create hydrogen fuel. A new device shows this is more than a mere pipe dream — after all, plants do it all the time.

Researchers at the Swiss Federal Institute of Technology (EPFL) Lausanne have brought this dream closer to fruition with a simple system that when exposed to sunlight, extracts water content from the air — humidity — and releases hydrogen gas. In doing so, if it can be scaled up, the system could provide a renewable hydrogen fuel.

The research led by EPFL chemical engineer Kevin Sivula and his team is detailed in a paper published in the journal Advanced Materials. “We invented a device that can harvest water from humid air and convert it to hydrogen and oxygen upon sunlight illumination,” Sivula said. “This work is directly inspired by the plant photosynthesis that converts carbon dioxide (CO2) from the air to sugars upon sunlight illumination.”

The system devised by the team combines semiconductor-based technology with a unique element: electrodes with three key characteristics. These electrodes, which Sivula describes as an “artificial leaf”, are porous to maximize contact with water in the air, and are conductive.

Arguably, the most important property of the electrode is their construction from a 3D mesh of glass fibres which starts as a “glass wool”. This means the resulting electrode is transparent, thus maximizing the amount of sunlight that reaches the semiconductor coating.

“The photoelectrochemical reaction is performed on a semiconductor surface able to convert solar energy into chemical bonds by splitting water into oxygen and hydrogen,” Sivula said, adding that constructing this artificial leaf electrode was the main challenge of the research.

He continued by explaining that the team’s device is composed of three main parts: a photoanode where oxygen is produced by water oxidation, a membrane to transport the protons to a photocathode where the protons are reduced to hydrogen, and a semiconductor coating that allows the photoelectrochemical reaction that produces hydrogen to take place.

The team also used a more practical way of harvesting water using humidity rather than in liquid form. This helps avoid problems that exist with current photoelectrochemical  devices that use incident light to stimulate a photosensitive material, like a liquid-immersed semiconductor, to cause a chemical reaction cells designed to operate under liquid conditions

This includes the fact that liquid-using photoelectrochemical devices are difficult to scale up because they are complicated and expensive to make, unlike the team’s new system. “Each step necessary to the cell assembly is reasonably scalable, from the support production to the material coating,” said Sivula. “We tried to use simple methods that would be easily scalable. However, the research phase must be pursued to increase the cell performance before moving to the scaling-up phase.”

While the research is a positive step towards a renewable source of energy, it is currently just a proof-of-concept that producesa modest amount of hydrogen. As well as testing different glass fibre sizes, the team needs to assess just how efficient the solar-to-hydrogen conversion process used by the device is.

“It will be important in the next research steps to increase the hydrogen production rate,” Sivula explained. Other elements of the system will also need to be worked on experimentally before the system can be practically realized. These parts can then be brought together allowing scientists to test the system as a whole.

Sivula concluded by explaining why a device such as this is sorely needed in the face of climate change driven by the burning of greenhouse gases. “Converting solar energy into chemical bonds such as hydrogen is a practical approach that would allow us to move towards a zero-carbon emission economy and decrease our impact on the environment,” he explained. “Indeed, hydrogen could be used as an energy carrier, especially in the mobility sector but also in industry feedstock.”