Art of Polymers compositions transform chemicals into a concert

Composers with the Multiverse Concert Series work with chemists to turn polymeric structures into musical works of art. 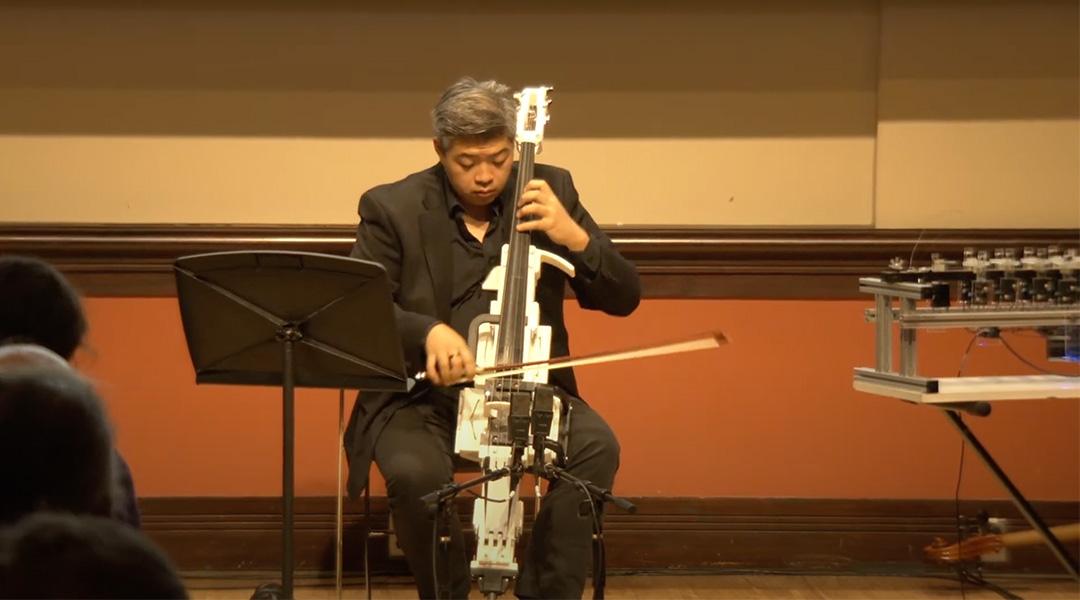 Plastic can be more than just a crinkly disposable water bottle. For David Ibbett, plastic and the long chains of atoms that comprise it — called polymers — were the inspiration to compose music for an entire concert.

Ibbett is a professional composer and director of the Multiverse Concert Series, a project that connects music and science in live performance. When he met Jeremiah Johnson, a professor who studies degradable and reusable polymers, he wanted to add a concert about polymers — the Art of Polymers.

Johnson’s work at MIT and with the National Science Foundation Center for the Chemistry of Molecularly Optimized Networks (MONET) is part of research that is laying the groundwork for polymeric materials that can help and be part of the natural environment rather than harm it. Ibbett was energized by talking to other scientists in MONET and their vision for polymer chemistry.

Of his newest composition for the concert, Ibbett remarks, “This piece is with Clara Troyano-Valls, and I got to see her work with rubber recycling up close. I got to see a future where we don’t have to throw tires away. It’s a big ray of hope, Clara herself is a big ray of hope.” In fact, the piece is titled “10^4 Rays of Hope”.

To create the melodies in the new piece, Troyano-Valls, a graduate student at MIT, sent Ibbett tensile testing data from samples made with various rubber recipes. Tensile testing is a common experiment in which a flat sample is stretched vertically to obtain information on its strength and stretchiness.

“The sound that came out of the stretching data had this natural rising glissando to it,” said Ibbett.

Many of the recipes led to rubber samples that broke under the tension, but — spoiler alert — Ibbett says ultimately there will be a combination that doesn’t break, and that is the climax of the music. “Being able to celebrate the chemistry is the goal of the music, so I hope that comes across in the joyful tone.”

To complement Ibbett’s “10^4 Rays of Hope” and two other pieces based on the chemical structure of common plastics, Scott Barton, a professor at Worcester Polytechnic Institute, also contributed a piece.

Barton studies electroacoustic music and is interested in how audio production can be used to explore new musical territory. He also builds robotic musical instruments, and he worked with Stephen Craig’s lab at Duke University to build a new instrument specially for the Polymers concert.

Discs of stretchy plastic that turn purple when tension is applied were used as drum membranes covering PVC tubes, making a plastic instrument that goes beyond Fisher Price electric pianos and elementary school recorders. Barton wrote, recorded, and mixed a piece titled, “Mechanophore”, using this robotic instrument and others.

A mechanophore is a molecular unit that has specially designed chemical bonds which respond to mechanical force like stretching or compression. The molecule in the plastic drumheads that turns purple is itself a mechanophore called spiropyran. When force is applied to spiropyran, one chemical bond in a ring of atoms breaks, which causes the molecule to turn from very pale yellow to bright purple.

This molecular process fascinated Barton. “This concept that these materials perceived as static were actually capable of feedback (the ring opening) was really interesting to me,” he said. “The energy and complexity of what was going on in this microscopic world inspired me. I sought to illustrate the dynamics of this world in sound, voiced by virtual and robotic instruments that are both organic and synthetic.”

The newest composer to join the team, Amir Bitran, is a scientist who works with polymers himself. He is about to finish his Ph.D. in biological physics at Harvard University studying folding of proteins in vivo.

Proteins are a type of natural polymer. Appropriately, then, he wrote about the way in which synthetic polymers fold, weave, and tangle around each other in a network. His piece titled “Polymer Entanglements” uses both live cello and electronics that echo the cello’s sound. The musical strand of the cello is meant to represent a single polymer strand, which when repeated and interwoven with the electronic echoes, creates a grander musical (and chemical) structure.

In addition to rubber recycling, MIT professor Bradley Olsen’s lab studies the structure of interconnected polymer chains called networks. Bitran notes that networks of polymers are never perfect, incorporating defects like chain ends that don’t connect to each other or loops where one chain connects to itself rather than another chain.

Bitran represented these defects in the music with little pauses or shifts in the tone. When asked about the difficulty of translating scientific work into music, Bitran notes that this isn’t his first time. “The challenge is finding scientific concepts that organically lend themselves to becoming musical material […] polymers are made of little blocks, and they wiggle, and at the molecular level they are kind of chaotic, and that chaos lends itself really naturally to music,” he said.

He wants to make sure that something like polymer chemistry, which can be very dense and intellectual, is conveyed to the audience, but also that his music can stand on its own as something that impacts listeners emotionally.

Performed virtually in January of 2021, the first Art of Polymers concert premiered three original compositions connected by explanatory interludes from MONET professors and students. A new, live installation of the concert premiered two additional original compositions. Science enthusiasts and music lovers alike can check out the Art of Polymers online.

The first concert is already posted, and the second will follow soon. Ibbett, Barton, Bitran, and the MONET team are certainly excited about their creation and about the scientific work that motivated it. Furthermore, the concert serves as a reminder that the polymer science community has a long way to go from the lab bench to using plastics to help our environment.

Madhu Bhaskaran: "As an engineer, you will always have to find a solution to problems in the world"
Lola Eniola-Adefeso: “When you feel you belong, everything becomes easy to tackle”
Sneaking drugs into cells using new nanoparticle materials
Pioneers in Science: Katherine Johnson