In their review, Jiang and Stenzel discuss the various creative approaches in which albumin can be combined with polymers for application in drug delivery. 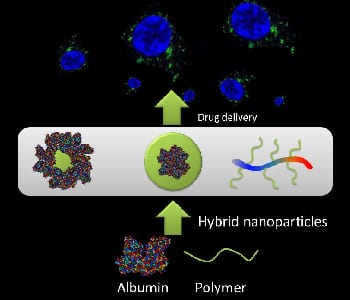 Albumin is the most abundant protein in the blood stream. Interestingly, albumin shows a high accumulation in inflamed and cancerous sites in the body. Therefore, albumin has long been utilized as a shuttle for anti-cancer drugs to enhance the solubility of the drug. Significant advances in this field were made when albumin, together with hydrophobic anti-cancer drugs, was processed into nanoparticles. This technique, which uses the hydrophobic drug as a glue to hold albumin together, has led to the development of Abraxane, one of the few nanoformulatio 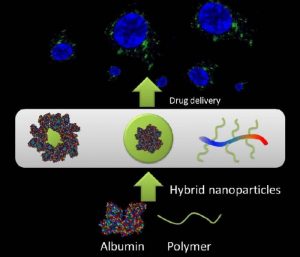 ns on the market.

Inspired by this success, materials scientists have explored the use of albumin as a building block for the formation of new nanostructures. Although albumin by itself has many desirable features as a drug carrier, material scientists have opened the array of properties by combining albumin with polymers. Polymers allow the addition of many new features to albumin such as stimuli-responsiveness. The polymer can furthermore modulate the overall polarity of albumin enabling the design of new drug carriers that are suitable for a range of drugs such as nucleic acids and platinum drugs.

In their review, Jiang and Stenzel discuss the various creative approaches in which albumin can be combined with polymers. Coating of polymer nanoparticles with albumin introduces a biocompatible surface that, in addition, has a high affinity to cancerous cells. While coating can be carried out after the polymer nanoparticles have been prepared, the simultaneous conjugation of a polymers chain to albumin, which subsequently self-assemble into albumin-polymer nanoparticles is more elegant. The biological activity of albumin is maintained while the bioactive surface layer of albumin hides the polymer core underneath. 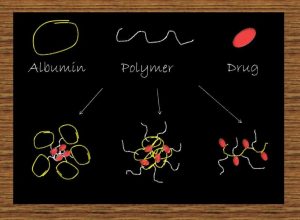 Albumin is not always used to modify the surface properties, but has also been employed as core-forming material or as a functional scaffold. In that scenario, the role of the polymer was to control surface functionality acting as a gate for drug release. In summary, albumin has been used in creative ways in combination with polymers, bringing together the best of both worlds. As a result, albumin-based nanoparticles that could be tailored for any drug delivery challenge could be designed.