Ahead of COP27, scientists are pushing back against growing defeatism

A lot is riding on COP27, and while many are feeling the pull of cynicism, there are still many reasons to remain optimistic. 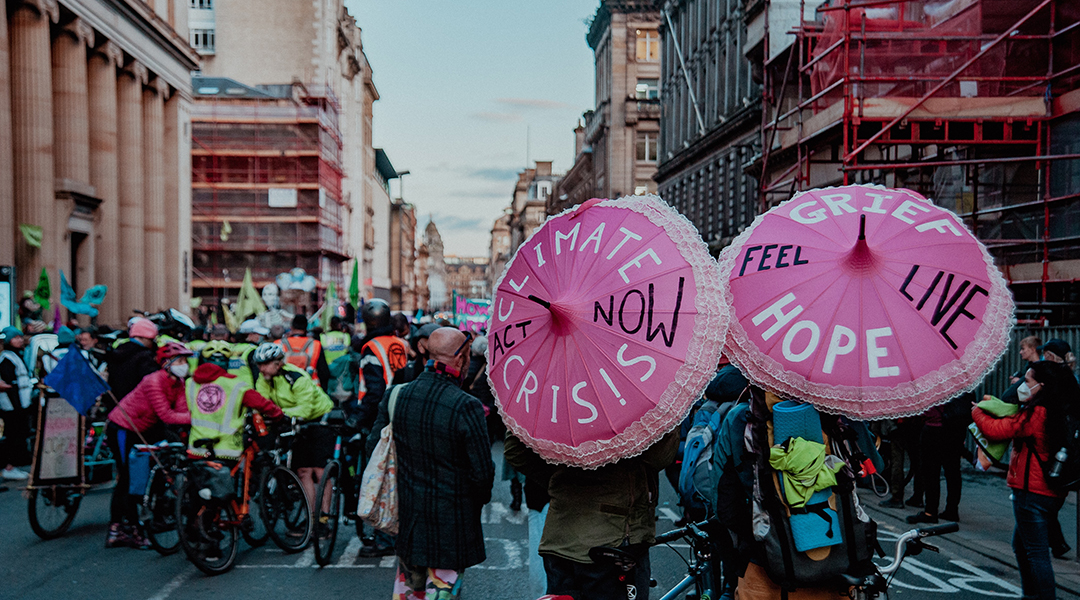 As the world prepares for another global climate summit, the mood among scientists and the public appears to be one of skepticism.

The climate conferences once felt like a beacon of hope, an acknowledgment that we, as a global community, must and could take substantial action to minimize the worst effects of a changing climate. With the first Conference of the Partices (COP) in Berlin in 1995, nations ratified the climate convention, setting the stage for the Kyoto Protocol two years later, which many remember as a landmark step in not only acknowledging, but mobilizing against the future impacts of climate change.

A legally binding agreement was made in Paris in 2015, and in Glasgow in 2021, pledges were more ambitious. Last year’s summit saw member countries acknowledge that more needs to be done to curb greenhouse gas emissions by 2030, as well as provide increased support for developing nations, many of which are bearing the brunt of an increasingly hostile global climate.

But the past year has seen little action, with nations failing to cut emissions amidst rising inflation rates, a looming recession, the war in Ukraine, and a global energy crisis. A United Nations (UN) report indicates that only 23 out of 193 countries have followed through and submitted their plans.

What should we expect from COP27?

COP27 will be held this year in Sharm el-Sheikh, Egypt, and the pressure is on as there is an expectation that this conference will put the ambitious goals set in Glasgow to the test. So far, there are over 30,000 people registered to attend representing governments, businesses, NGOs, and civil society groups. The UN Secretary General António Guterres has said this conference must deliver a “down-payment” on climate solutions that match the scale of the problem.

The UN has outlined three areas of discussion: mitigation, adaptation, and (the elephant that never leaves the negotiation room) climate finance. This year’s official goal has not yet been set, with wealthy nations wanting to focus on ways to help developing nations phase out fossil fuels (a move many are calling an energy hypocrisy), while developing countries want a commitment to funding to help address the climate-fueled disasters they are already facing — such as flooding in Pakistan and widespread famine in Kenya, Somalia and Ethiopia.

At the COP16, and re-confirmed during the 2015 Paris Agreement, developed countries promised to contribute US$100 billion annually in climate finance to developing nations to help them cope with extreme weather events as well as fund projects that would help establish sustainable transportation and renewable energy. Though an important symbol of trust, nations are falling short of this agreement, with $79.6 billion mobilized in 2019 (up 1.6% from 2018), much of which was in the form of loans.

In an interview with The New York Times, environmental activist and policy analyst Alden Meyer also said these talks need to move away from nit-picky language negotiating — a last-minute watering down of the Glasgow agreement to include the phrasing “phase-down” instead of “phase-out” in relation to coal comes to mind — into actionable and legally-binding treaties.

“The COPs have a culture which is zero-sum, hostage-taking, bargaining, negotiating games,” Meyer said. “It’s not yet clear that the people who are coming to the COPs are even the ones that can deliver the transformation of the culture and the rolling up the sleeves and making things happen in an accelerated way for the transformation that needs to occur.”

Many also hope that the conference’s location will help put the focus on Africa and the Global South. In a joint editorial recently published by over 260 health journals, scientists urge wealthy nations to “step up support for Africa and vulnerable countries in addressing past, present, and future impacts of climate change”.

They argue that the climate crisis is a product of global inaction, and comes at great cost not only to disproportionately impacted African countries, but to the whole world. “Africa is united with other front line regions in urging wealthy nations to finally step up, if for no other reason than that the crises in Africa will sooner rather than later spread and engulf all corners of the globe, by which time it may be too late to respond effectively. If so far they have failed to be persuaded by moral arguments, then hopefully their self-interest will now prevail.”

Why we need to curb climate defeatism

Governments’ inaction is certainly taking its toll. A survey published in The Lancet in December 2021 reported that 45% of people aged 16 to 25 said “their feelings about climate change negatively affected their daily life and functioning”, with 75% saying they “think the future is frightening”.

Many are giving in to climate defeatism — a feeling that the situation is so hopeless that there is no real point in acting to limit greenhouse gas emissions. Others have given up entirely on the climate conferences, arguing they are merely performative and serve no real purpose.

But this, writes the editorial board of The Washington Post, is a form of denialism, and one that directly aids those profiting off continued destruction.

“Too many have embraced climate defeatism, resigning themselves to the fatalistic view that nothing can be done. Others have written off the U.N. process entirely, believing it is an impediment to transformational change,” they wrote in an opinion piece published this week. “Neither approach is productive. Instead, parties should make the most of the upcoming talks — starting by following through on the Glasgow vow to scale up national climate pledges.”

The world is, unfortunately, not on tack to stay under the critical 1.5 °C. An analysis by the World Resource Institute found that current pledges would reduce global greenhouse gas emissions roughly 7% from 2019 levels — though a reduction of 43% is necessary to meet the 1.5 °C target.

It’s very easy to get swept up in the doom and gloom being presented to us daily, but even incremental change, regardless of how frustratingly slow it is, is still a move in the right direction.

“We need a new message for climate change,” wrote Hannah Ritchie in a 2021 article published in WIRED. “One that drives action through optimism that things can be better. Or, based on the signs that things are getting better, we might rebrand this optimism as realism. This would be much more effective at driving real change.”

Why some are optimistic

We’ve come a long way in the last 20 years alone, with the climate becoming a key topic of global diplomacy driven by the UN climate talks and a growing push from the public to reduce emissions and embrace sustainable energy solutions. Scientists have developed sophisticated tools to monitor greenhouse gas emissions and innovative solutions to mitigate and adapt to the unfolding climate crisis.

There are fears that all this work will be undone with unprecedented setbacks faced in the last year. The invasion of Ukraine, for example, has weakened European governments’ climate commitments as a result of a crippling dependence on Russian gas and oil.

This has led to a return to coal in some places in order to stave off the worst of the resulting energy crisis, leading to a 0.7% increase in global demand for coal from 2021, according to latest report by the International Energy Agency (IEA). While this is nothing to be happy about, the IEA and many experts are optimistic about what this means for long-term energy prospects, stating that the global energy crisis could be a historic turning point.

“Although there might be some increased coal use in the short term, countries — in Europe in particular — are responding by accelerating their transition [to cleaner energy sources],” said Bob Ward, a policy and communications director at the Grantham Research Institute on Climate Change and the Environment, an arm of the London School of Economics, in an interview with Grid.

“In the short term, and particularly over this winter, there may be the burning of more coal, simply because there isn’t going to be enough gas available with the sanctions and other issues related to Russia’s invasion of Ukraine. But further out, the picture looks far more promising,” he said.

This optimism, he says, isn’t just based on a hope and a prayer that governments will do the right thing. IEA analysts indicate there is already evidence of measures in place that will help catalyze this much-needed paradigm shift.

“The environmental case for clean energy needed no reinforcement, but the economic arguments in favor of cost-competitive and affordable clean technologies are now stronger — and so too is the energy security case. Today’s alignment of economic, climate and security priorities has already started to move the dial towards a better outcome for the world’s people and for the planet,” said IEA Executive Director Fatih Birol.

Fears remain that Europe and other wealthy nations might waste this opportunity. “[But] this crisis might yet be different,” said Thijs Van de Graaf, associate professor of international politics at Ghent University, in the Financial Times. “Many of the strategies to lower dependency on Russia are the same as the policy measures you want to take to lower emissions.”

Moving forward, stronger policies will be essential to drive the huge increase in energy investment that is needed to reduce the risks of future price spikes and volatility, wrote the IEA in their report.

Van de Graaf and others believe that the motivating message behind renewables has shifted from being economic to political, with renewables representing a form of “freedom energy”, which might make all the difference.

Whether this paradigm shift survives the challenges of the energy crisis and global economic slowdown still remains to be seen. Nevertheless, though it may be difficult to see and it feels excruciatingly slow, change is happening, and the fight for our planet is absolutely still worth continuing.

Absolute zero: A counter-intuitive energy transition
How do nanoplastics affect crop yield and nutrition?
Interface engineering in rechargeable batteries — A trade-off between functionality and detrimental ...
Seeking life on Mars: What you need to know about the Perseverance mission