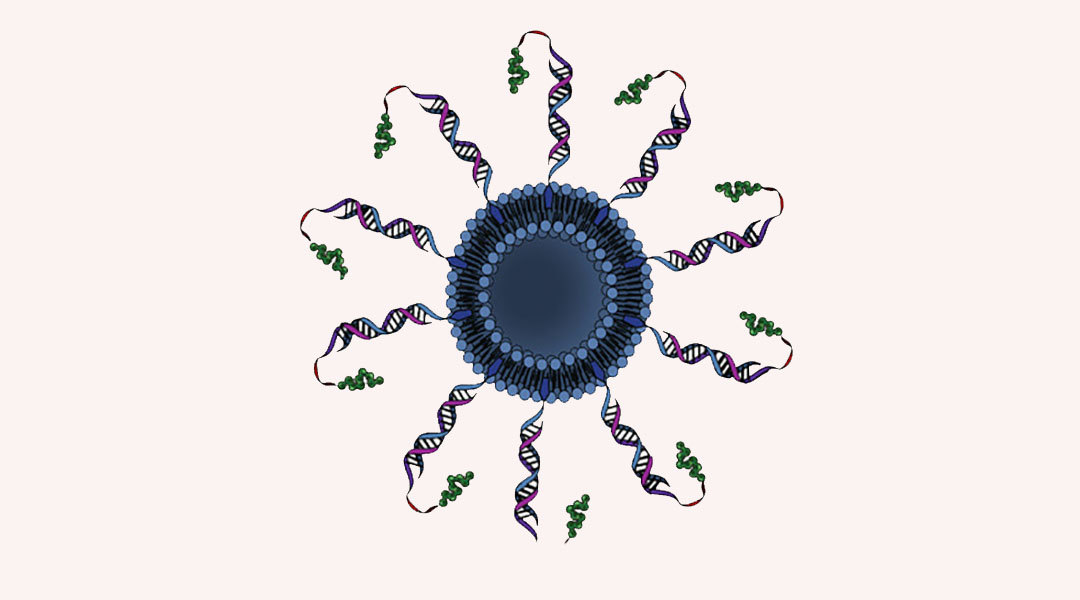 Over the last couple of decades, scientists have been working toward making vaccines that treat or prevent cancer. This relatively new field, called immunotherapy, aims to prime and activate a patient’s own immune system against cancerous cells, potentially circumventing the difficult side effects experienced during chemotherapy.

“Cancer vaccines work similarly to vaccines against the flu or other infectious disease in that they program the body’s natural immune system to attack a particular target,” explained Chad Mirkin, professor at Northwestern University. Mirkin and his colleague, Bin Zhang, are interested in designing a cancer immunotherapy to improve the survival of patients with metastatic prostate cancer.

“Prostate cancer is estimated to be the second deadliest cancer among males in the United States, accounting for ~21% of all new cancer cases in males reported in 2020, and thus and an urgent, unmet therapeutic need exists,” said Mirkin. “While there are alternatives, some patients do not respond to treatment, and thus can benefit from an alternative therapeutic option.”

Immunotherapy is particularly promising in prostate cancer, say the researchers, due in part to a large number of identified targets which have relatively few mutations and the lack of these targets having a presence in other essential organs, which reduces unwanted side effects.

In a study published in Advanced Healthcare Materials, Bin and Mirkin sought to use nanoscale architectures called spherical nucleic acids to create a targeted therapy with a robust immune response.

“[Vaccines] have been developed for a variety of different cancers, but many of the clinically employed strategies involve simple saline mixtures of targets and stimulators for the immune system,” said Mirkin. “Simple mixture systems do not permit control over cellular uptake, biodistribution, clearance, trafficking, or co-delivery of components to the same cell; this lack of control is likely a reason for the suboptimal results observed clinically amongst different cancer vaccines.”

In contrast, nanostructures offer a unique opportunity to package both adjuvants — additives that boost the immune response — and antigens or targets — for example, a protein found on the surface of tumors that will help the immune system identify and attack the cancer — in such a way that the vaccine can be better delivered to desired sites within the body and lead to a stronger, more effective immune response in patients.

“By taking clinical targets from prostate cancer and repackaging them into an optimized cancer vaccine that takes structure under consideration, potency could be improved,” said Mirkin.

The spherical nucleic acids (SNAs) used in the study are composed of a nanoparticle core fitted with radially-organized short-stranded DNA molecules called oligodeoxynucleotides — known to stimulate the immune system in a similar way to viral or bacterial DNA. They are particularly well-suited for “immune system modulation” due to their modularity, tunability, and easy synthesis, and have been shown to elicit a robust immune responses in mice.

“SNAs are internalized by cells more rapidly and to greater extents than linear structures, and they do not require toxic ancillary transfection reagents,” added Mirkin. As a result of the arrangement of the immune stimulator and antigen, how the vaccine is “seen” by immune cells is altered, resulting in a more potent immune response that is now capable of killing tumor cells.

“These findings can be applied across cancers and other types of disease,” added Mirkin. “As long as there is a known target, SNAs provide the ability to repurpose that target and harness it in an optimized immunotherapeutic architecture that increases potency.

“The next step is to stimulate a broader immune response by considering the structure of an SNA vaccine carrying multiple targets for a particular disease. This will enable the vaccine to combat heterogeneity in cancers and across patients and ultimately positions it for clinical implementation.”