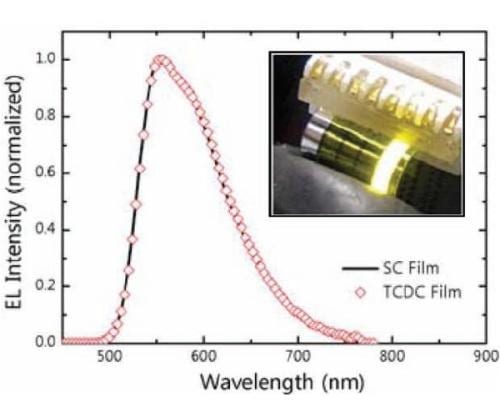 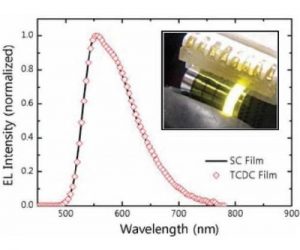 Research into next generation organic conductive materials as replacements for current metal-oxide electrodes has yielded a multitude of production methodologies. Many are based on the solution processing of conductive polymers that display good performance, albeit being hampered by the “thickness-dependent conductivity” of the produced films. For many applications, high transparency of these conductive polymer films is required implying a thin film thickness must be achievable, without any loss in conductivity. A solution to this “thickness-vs-conductivity” conundrum is proposed by Byoung Hoon Lee from the Gwangju Institute of Science and Technology.

A loss in conductivity with decreasing film thickness is attributed to the inherent variation in the crystallinity and film morphology that arises during the film formation process. Conductive polymers often have very rigid backbones that readily form order crystals upon drying. The ordering of the polymer chains requires chain mobility, which can be controlled by the temperature and method of drying. Too high drying temperatures (in the case of drop-casting), or too fast a drying rate (in the case of spin-casting) gives little time for sufficient chain organization, ultimately lowering the film crystallinity. A lower crystallinity decreases the electron localization length, reducing the overall conductivity of the film.

In order to increase the crystallinity of conductive polymer films whilst still being able to control the film thickness, the authors have introduced an adapted spin-casting technique called thickness-controlled drop-casting (TCDC). The technique utilizes an initial short spin-casting cycle followed by a high temperature annealing cycle similar to drop-casting. The spinning step simply reduces the amount of solution on the substrate. Thanks to the high solution viscosity, the solvent evaporation during the spinning step is limited, minimizing any crystallization. The final “baking” step removes the solvent in a controlled manner to allow for maximum chain mobility and high crystallinities.

Using this technique, films of CSA-doped polyaniline (PANI) substrate were prepared, on a polymer substrate, showing a conductivity of 500 S/cm independent of the film thickness. XPS and AFM data confirms that the films morphology is largely unchanged when the thickness is altered, unlike that of films prepared by a conventional spin-casting methodology. The retention of the high conductivity of the films during repeated flexural tests is shown, which means that these films can be used as electrodes in flexible polymer devices. Furthermore, the superior behaviour of TCDC films over spin-cast films in both flexible polymer light emitting diodes (PLEDs) and polymer solar cells (PSCs) is demonstrated.