A Chemical Switch for Physical Release 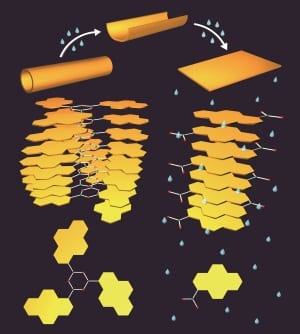 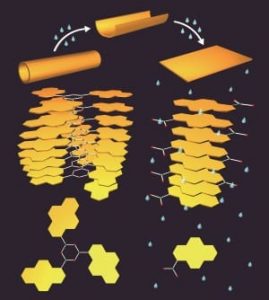 Boroxines have been studied mostly in relation to covalent organic frameworks, useful for gas storage, nanopatterning, and opto-electronics. Manipulation of the self-assembled structures of boroxines is a different idea with a whole new set of possible applications, for example in biology, medicine, and cosmetics.

A simple dehydration reaction generates the boroxines ((R-BO)3) from boronic acids. The structure of the boroxines after self-assembly in toluene is determined by the aromatic substituent (R). These structures are then used to house guest molecules.

The trick to creating a useful host–guest system is to engineer a suitable and fully predictable release mechanism. Now, a new method demonstrated by researchers from Japan manipulates the morphology of the nanostructures by precisely adjusting the humidity of the dessicator in which the sample is kept.

In order to develop this system a step further, these researchers noted that boron can act as a hard Lewis acid to bind bases and anions, affecting the boroxine’s stability against hydrolysis. When an amine—in this case pyridine—is added to the boroxine structures prior to humidification, the nanotubes transform into helical coils instead of nanosheets.

The guest molecules are released faster during this second type of transformation from nanotube to helical coil than from the nanotubes, and even faster again during the transformation to nanosheets, providing a coarsely controlled, three-speed system. Further exploitation of boroxine chemistry, by controlling the exact humidity level and the concentration of amines in the system, yields a finer control over the release profile.