3D-printed structures can be built inside synthetic cells without opening or damaging them. 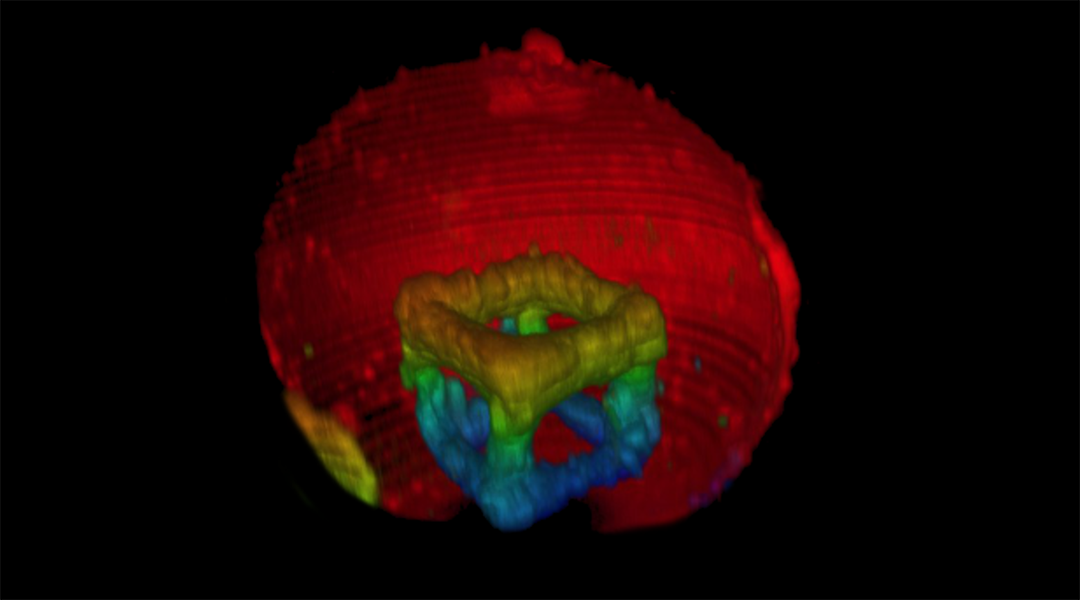 What is synthetic life? This question is at the center of the burgeoning field of bottom-up synthetic biology, where researchers draw from biology and materials science to build artificial mimics of living cells.

“I see synthetic cells as model systems, simplified versions of living cells that we engineer to understand fundamental principles of life,” explained Kerstin Göpfrich, independent group leader at the Max Plank Institute for Medical Research in Heidelberg, Germany, to ASN. “Just as cells can accomplish extremely diverse tasks, our vision is to engineer synthetic cells towards diverse goals, be it to attack viruses or to digest pollutants.”

Göpfrich and her research group search out new ways to assemble and engineer cells that, instead of copying life, probe the boundary of what can be achieved with these types of artificial systems.

While reading about research in two-photon laser printing, Göpfrich says she became inspired, realizing that the structures her colleagues were printing were smaller than a cell and had potential application in creating complex 3D architectures inside synthetic cells.

“Laser printing has the unique advantage of being able to build up structures in a non-invasive manner as there is no physical contact between a printing nozzle and the printed object,” said Göpfrich. “Imagine you could draw objects with a beam of laser light. That is basically what can be done with 3D laser printing on an extremely small scale.” The structures they printed are 10 times finer than human hair.

The approach uses laser pulses which produce radicals that trigger polymerization in a light-sensitive material called a photoresist. Polymerization only happens at the illuminated spot, which can be directed freely in 3D space thanks to the control endowed by a two-photon laser, allowing the team to print inside a cell at a precise location in a non-destructive manner. Using confocal fluorescence microscopy, the team was able to visualize their creations.

“We printed letters of the alphabet and a cube frame into the interior of lipid vesicles,” said Göpfrich. “These are, of course, just a proof-of-principle experiments. If we use stimuli-responsive photoresists we hope to build up dynamic structures one day, like synthetic cytoskeletons or organelles that respond to external stimulation.”

In one experiment, the team printed a transmembrane pore, like an open door to the cell. Since the photoresist that they used is porous itself, to achieve the artificial pore, they just had to print a rod from one side of the lipid membrane to the other.

“This can be quite useful,” said Göpfrich. “Imagine, for instance, you want to initiate a certain reaction inside the cell. You could then print a pore to bring a product or an enzyme inside, which then initiates the reaction. Biological pores are often too small for large macromolecules, like enzymes, to pass through. It was remarkable that the vesicle remained stable when we print across its membrane.”

This is the first time that two-photon laser printing has been used inside any sort of compartment, meaning that the applications of this study will extend beyond just printing inside synthetic cells — Göpfrich predicts this will be useful in areas such a microfluidics, for instance, to barcode droplets with light. “One day, we may even dream about a 3D-printed synthetic cell,” she said.