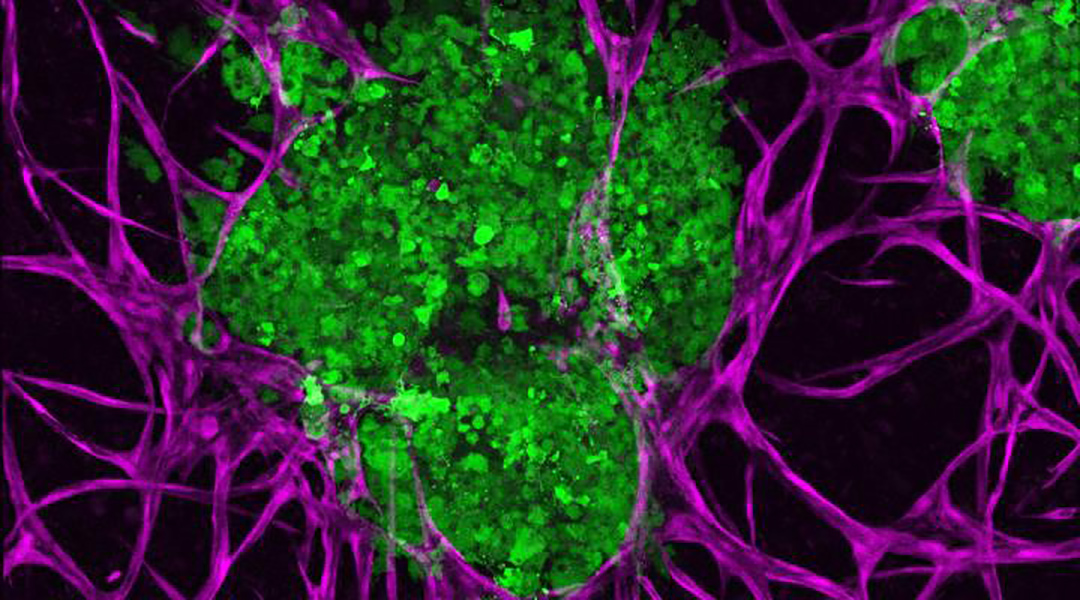 3D bioprinted breast cancer tumors (green) and supportive microenvironments (purple) to better understand how they interact with one another. Penn State

The tumor microenvironment plays an integral role in cancer development, progression, and treatment. Understanding the intricate mechanisms that take place between solid, difficult-to-treat tumors and the microenvironments they create is crucial to developing effective therapies and improving patient survival.

Breast cancer, for example, though treatable, is globally one of the most commonly diagnosed malignant cancers in women, spreading by invading surrounding tissue, the blood, or via the body’s lymph nodes. It is known that breast cancer’s microenvironment influences this outcome by tipping the balance of the body’s suppressive immune response in the vicinity of the tumor, while also altering the genetic information of nearby cells to help the cancer grow and spread.

“All of these processes in tandem constitute the dynamic microenvironment, and their interactions are critical to understand breast cancer pathogenesis for developing novel and effective therapies,” wrote a team of researchers led by Ibrahim Ozbolat, professor at Pennsylvania State University.

Scientists have, in the past, created models of different cancers to study how this happens and perhaps pinpoint crucial steps in the process. While helpful, many have been based on 2D cell cultures, which according to the authors provides a “reductionist view” that fails to account for the complexity of the situation. This led to the advent of “spheroid” cultures, which are 3D cell cultures that are more effective models since they tend to preserve cellular interactions that occur in nature biological settings.

In the current study, Ozbolat and his team developed a 3D cell culture using metastatic triple-negative breast cancer cells—an aggressive and difficult-to-treat breast cancer—that accurately models the native interactions between these tumor and their microenvironment. Crucially, their platform exhibited some of the major hallmarks of cancer including invasion and tumor growth.

“We brought together the tumor and its microenvironment and studied how the embedded tumor affects its surrounding matrix,” said Madhuri Dey, first author on the paper published in Advanced Biology and a doctoral student in the Department of Chemistry in the Eberly College of Science. “Then we asked if we could get any meaningful genetic information from this composite system.”

Specifically, they sought to determine how varying the density of common microenvironment components, such as stromal cells and matrix components, could shed light on tumor growth and cancer invasion. Compared to other studies and models, which analyze the genetic information of individual cells, Dey and colleagues took it one step further to investigate a broader picture.

“We looked at the genome of the entire system,” he said. “The result was a far more representative understanding of how cells talk to each other in the native conditions.”

They were able to demonstrate that cancer cells communicate with cells that line blood vessels, called endothelial cells, which control the exchange of materials between blood and the extracellular environment. The cancer cells were also found to communicate with the cells that secrete collagen to produce the scaffolding of tissues, called fibroblasts. “The cancer-endothelial cell cross-talk is equally important as the cancer-fibroblast cross-talk,” Dey said, noting that each process can influence the other and change how the cancer grows.

Through a previously developed 3D bioprinting technique called aspiration-assisted bioprinting, the team was able to precisely position tissue spheroids within a sacrificial scaffold to also test how distance between cancer cells would influence growth. “We asked, ‘Can proximity increase cancer aggressiveness?’ and we found that there is a critical distance,” Dey said. “Tumors far apart don’t affect each other, but endothelial cells from neighboring tumors can nourish each other and increase how aggressively the cancer spreads.”

Though a first step, this study demonstrates the valuable insights that these types of models could have in future cancer research. For example, the team plans to use the fabrication method to investigate how engineered immune cells programmed to target cancer cells can be improved to penetrate solid tumors and limit their spread.

“We could also use this as a personalized tool to test treatment effectiveness for individual people—that’s a future goal,” Ozbolat said. “There are so many ways in which we can apply this tumor microenvironment model.”