Developing increasingly lighter and stronger alloys for engineering applications is an ongoing - and never ending - endeavour of materials scientists. 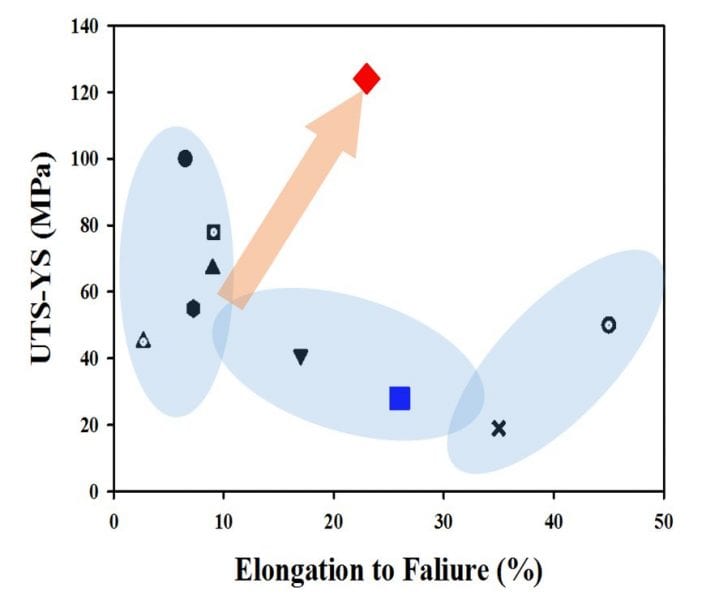 Developing increasingly lighter and stronger alloys for engineering applications is an ongoing – and never ending – endeavor of materials scientists. Magnesium alloys – the lightest structural metallic materials available – are therefore in the focus of research. Alloying magnesium with an even lighter element, lithium, is an attractive pathway to develop new ultralight alloys with a high specific strength, defined as the strength to density ratio. 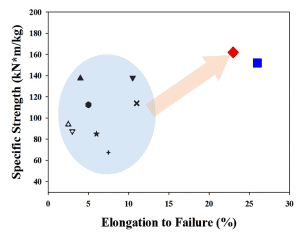 A record specific strength of Mg-30 at. % Li alloy reported recently [W. Xu et al., Nature Materials 14, 1229–1235 (2015)] has been celebrated as a great success on this path. This success has now been followed by a development in which an even higher specific strength and almost the same high ductility has been achieved with an alloy of the Mg-Li system with a lower lithium content and some Ca addition: a tertiary alloy Mg-4Li-1Ca (concentrations in wt. %) [Y. Estrin et al., Materials Letters 173, 252–256 (2016)]. A remarkable fact is that the superior mechanical performance of alloy Mg-4Li-1Ca (LX41) demonstrated in Fig. 1 was achieved using a rather simple processing route, which is amenable to industrial practice. It involves hot rolling at two different temperatures (two-step rolling) to a total thickness reduction of just 60% and subsequent 30 min annealing, referred to as TA30 treatment. The property profile the alloy acquires after this treatment is extraordinary. The authors relate these superior properties of LX41 to microstructure and texture produced by this processing. A further advantage of the new alloy in TA30 condition is its record strain hardening ability at room temperature, i.e. the difference between the ultimate tensile strength (UTS) and the yield strength (YS) illustrated in Fig. 2. This means that the material is easy to form and becomes stronger in the process of forming, which is advantageous for future service. 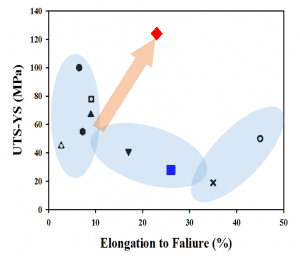 Figure 2. Strain hardening capability (UTS – YS) vs. elongation to failure.
The superior performance of LX41 (red diamond) is highlighted by an arrow. Blue square: alloy Mg-30Li. Other symbols correspond to literature data for other hot-rolled Mg alloys and are explained in the original publication [Y. Estrin et al., Materials Letters 173, 252–256 (2016)].

Why was it important for an international team that developed this material, which is based in Melbourne, Moscow, Mumbai and Aachen, to design an alloy with a moderate Li content? The answer becomes clear if one thinks of applications of Mg-based alloys for medical implants, particularly for bone replacement. Bioresorbable vascular stents are a further area of interest. Especially in the first example, where massive release of Li+ ions may have a biocidal effect, the need to work with lean alloys becomes imperative. Indeed, the alloys with a lower level of Li, such as LAE442 that contains 4 wt. % Li, were shown [F. Witte et al., Acta Biomaterialia 6, 1792–1799 (2010)] to exhibit acceptable host response in vivo. The newly developed LX41 alloy also exhibited a reasonably good cytocompatibility [S.S. Nene et al., Bionanomaterials, DOI: 10.1515/bnm-2015-0019]. A result that should allay possible concerns about toxicity of Li is that the concentration of Li+ ions released from an LX41 specimen into the surrounding simulated body fluid was below the accepted level. The possibility for a surgeon to easily deform an implant to adjust it to a given condition in the operation theatre environment, with the implant becoming stronger through that, is an added benefit of the new alloy.

The exceptional properties of the ultra-light alloy LX41 reported demonstrate that its development can be regarded as a breakthrough in magnesium research. Adoption of this alloy by industry for structural applications seems a realistic possibility. Its use in medical implants is another attractive option.

Printed Electronics: Print Your Own Speakers
Resolving the wiring issues in printed electronics
How sticky gold could “pull off” the next big thing in semiconductor technology
Pharmacist-Led Interventions May Help Prevent Cardiovascular Disease