Zip it Up!! Single-Chain Polymer Nanoparticles via Intrachain Radical Polymerization 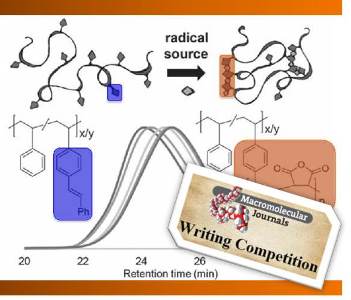 Dynamic synthetic polymer systems are emerging as modules to study structure-property functions, motivated largely by Nature’s biopolymers. Whereas multiple peptide-based polymers feature precise monomer sequence and controllable folding, fully synthetic polymers have yet to achieve and mirror the complexity found in Nature. Thus, polymer chemists, armed with controlled polymerization processes, the ability to install desired functional groups, and a vast knowledge of supramolecular interactions, are currently striving to engineer elegant polymer systems that are capable of folding into hierarchical architectures that, on a basic level, mimic the sophisticated structures afforded through biosynthesis. In this regard, an emerging area lies in the fabrication of single-chain polymer nanoparticles (SCPNs) via selective point folding and chain collapse in dilute solutions.

Erik Berda and his coworkers from the University of New Hampshire have developed a method to engineer SCPNs via intrachain radical polymerization of pendant styrene or stilbene units within a poly(styrene) backbone.

To imbue active olefin-bearing polymers as pendant units, a post-polymerization functionalization strategy was employed, affording poly(styrene) materials studded with either vinyl (styrenic) or stilbene side chains via Wittig reactions. Pendant styrene units were polymerized under high dilution, leading to intrachain crosslinking, and SCNP formation. As a result of the coil-to-nanoparticle transition, the radius and intrinsic viscosity both decrease, demonstrating the more globular ‘protein-like’ nature of the SCNPs. Integration of maleic anhydride as a comonomer surprisingly leads to a less controlled SCNP formation, as the lower relative reactivity of the comonomer can promote termination and lead to interchain crosslinking. 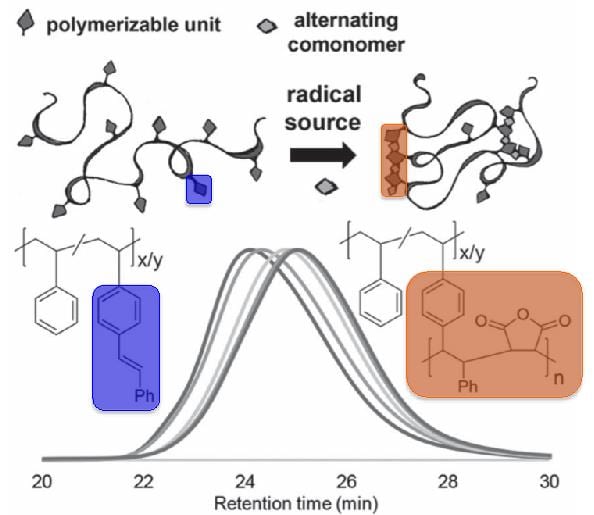 As stilbene homopolymerization is highly unfavorable, ‘zipping up’ of this polymer chain is achieved by adding in maleic anhydride as a comonomer under conditions of high dilution. It is interesting to note that, in this case, the monomer kinetics favor a strictly alternating radical copolymerization (i.e., more propagation events), and thus, the amount of crosslinking can be controlled with relative ease via the amount of c omonomer introduced. As polymer chemists endeavor to produce biomimetic synthetic systems, exhibiting control over crosslinking that can afford ill-defined folding motifs remains a difficult task.

This system is very interesting, as it is simplistic in approach, yet can afford SCNPs with desirable properties (e.g., fluorescence, as the authors demonstrate via installation of N-(1-pyrnene)maleimide as a comonomer), along with tunable shapes and structures. In addition, the exploitation of alternating copolymerization routes opens up further synthetic routes to advanced polymer frameworks. Furthermore, while this is a preliminary report, the wide accessibility of styrene monomers, along with the advent of novel post-polymerization strategies to install various functional units within polymer backbones promise that the strategy of Berda and coworkers can be utilized to afford more complex and diverse materials.

Zhenan Bao: Shaping the future of wearable electronics
Pushing the Limits of Technology to Enhance Electronic Skins
Degradable microrobots could help deliver cells within the body
Tuning nanoparticle shape and size by genetic engineering of bacteria